The host of a weekend show on MSNBC is angry that the network wants her to talk about the presidential race. 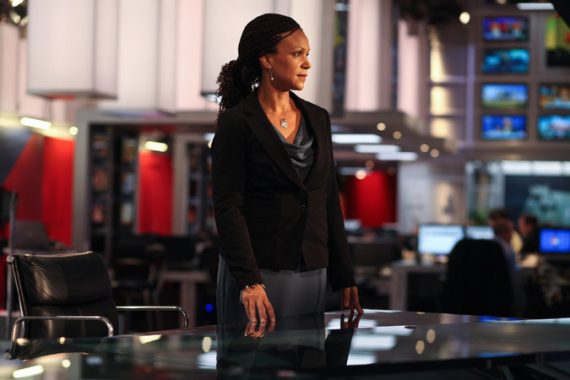 Melissa Harris-Perry, a Wake Forest political science professor who hosts an eponymous weekend show on MSNBC, is angry that the network wants her to talk about the presidential race.

In an unusually public flare-up, one of MSNBC’s television personalities clashed with the network on Friday in a dispute about airtime and editorial freedom and said she was refusing to host the show that bears her name this weekend.

The host, Melissa Harris-Perry, wrote in an email to co-workers this week that her show had effectively been taken away from her and that she felt “worthless” in the eyes of NBC News executives, who are restructuring MSNBC.

“Here is the reality: Our show was taken — without comment or discussion or notice — in the midst of an election season,” she wrote in the email, which became public on Friday. “After four years of building an audience, developing a brand and developing trust with our viewers, we were effectively and utterly silenced.”

In a phone interview, Ms. Harris-Perry confirmed she would not appear on the show this weekend. She said she had received no word about whether her show, which runs from 10 a.m. to noon on Saturdays and Sundays, had been canceled, but said she was frustrated that her time slot had faced pre-emptions for coverage of the presidential election. She said she had not appeared on the network at all “for weeks” and that she was mostly sidelined during recent election coverage in South Carolina and New Hampshire. (She was asked to return this weekend.)

In her email, Ms. Harris-Perry wrote that she was not sure if the NBC News chairman, Andrew Lack, or Phil Griffin, the MSNBC president, were involved in the way her show was handled recently, but she directed blame toward both.

“I will not be used as a tool for their purposes,” she wrote. “I am not a token, mammy or little brown bobble head. I am not owned by Lack, Griffin or MSNBC. I love our show. I want it back.”

Implying that she is being marginalized because she’s black is serious stuff, which she has walked back somewhat. The network’s rationale seems obvious to me.

For MSNBC, this is unwelcome news during a heated election. Last year, after its scandal involving Brian Williams, Mr. Lack, the former head of NBC News, was brought back to run the news division, and one of his chief missions was to fix the ailing MSNBC, which significantly trails Fox News and CNN in viewership. In the last few months, Mr. Lack has steered MSNBC away from its liberal identity and moved it toward harder news in the daytime hours. Since January, the network has had round-the-clock election coverage (including the reintroduction of Mr. Williams as co-anchor on primary nights), and notched strong ratings gains year-over-year in the mornings and afternoon.

Ms. Harris-Perry, who is also a professor at Wake Forest University, has hosted her MSNBC show since 2012. She has used the show to explore issues like social justice and racism, and diversity has been the centerpiece of the show since its start.

“I care only about substantive, meaningful and autonomous work,” she wrote in her email. “When we can do that, I will return — not a moment earlier.”

She said that last month the onscreen branding for her show was replaced by MSNBC’s slogan, “The Place for Politics.” With the election heating up, her show was pre-empted each of the last two weeks and for the most recent edition, on Super Bowl Sunday, she was told to talk mostly about the presidential race.

She still did speak about other topics, including Beyoncé’s new video for her song “Formation” and how it addressed race. But perhaps in a sign of the network’s shifting priorities, as she and her guests engaged in a lengthy discussion about the video, live video of rallies for Jeb Bush and Chris Christie in New Hampshire played in a box on the screen as well.

Ms. Harris-Perry, who is under contract, said that she was told that pre-emptions and election coverage were going to play out for the “foreseeable future.” Joy Reid will take over her time slot on Saturday, just as she has for the last couple of weeks.

Ms. Harris-Perry said not being able to talk to her viewers felt like a “betrayal.”

I’ve only seen her show once or twice and only because Dan Drezner was on. It’s apparently aimed at politics nerds, a niche I fit into. But the bottom line is that MSNBC has always struggled for an identity and has never been able to leverage the seemingly huge advantage of NBC’s news team to be more competitive in the cable news industry.

Perry was hired under a different regime which had a very different branding scheme. The notion that it is a “betrayal” for her new bosses to preempt a marginally popular show to cover the presidential campaign—always the bread and butter of cable news programming—or that she is entitled to “autonomy” in what she talks about on their air is laughable. MSNBC isn’t her classroom and she’s not entitled to academic freedom on their time. When Fox and CNN are covering the political horse race during probably the most contentious and surprising presidential contest in my lifetime, all but her most dedicated viewers are going to be changing channels when she’s talking about the sociological implications of Beyoncé videos.

I’m more than a little sympathetic to Perry’s desire for smarter discourse on cable news. There’s only so much that one can say about the political horse race. Bringing in more scholars with substantive knowledge and more voices that aren’t coming from white, Ivy League graduates is a huge plus. But television is a bottom-line business and she has to deliver viewership. If she were winning her time slot, you’d better believe MSNBC would be using her more, not less.