Michele Bachmann is claiming that the debt downgrade proves she was right about not raising the debt ceiling. 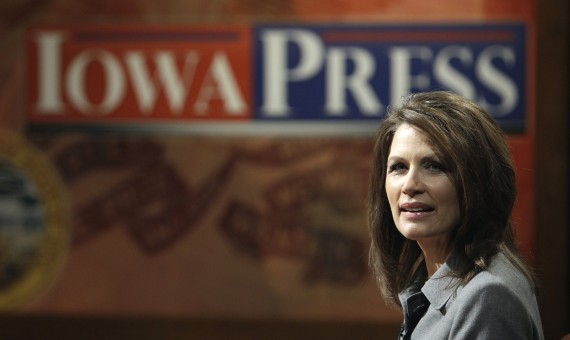 Slate’s David Weigel reports that Michele Bachmann is still convinced that she was right about not raising the debt ceiling, and she bizarrely points to the decision by S&P to downgrade the nation’s credit rating as proof she was right:

Michele Bachmann wants Iowa to know that she was right all along.

There are more than 70 people listening to this message. It’s hot. She ran a little late. Some of them volunteered to sit to Bachmann’s left or right to hold signs behind her, but most are in the shade. They’re not reacting or applauding yet.

“What we saw last week is the markets agreed with me,” says Bachmann. “The markets saw what happened in Washington when Obama got a $2.4 trillion check. And one thing you learned is you can’t fool the markets! The politicians were busy applauding themselves! They were patting each other on the back! They were saying, ‘Didn’t we do a great job! We just raised the debt ceiling!’ How did that make you feel?”

The winning argument, the one she keeps returning to, is the saga of Michele and the Debt Limit. She followed her instincts. Iowa Republicans shared those instincts. They were right, and the elitists were wrong. (When aren’t they wrong?) They promised that if the debt limit got hiked, rating agencies would go back to sleep. They didn’t. Standard & Poor’s lowered America’s bond rating from AAA to AA+.

And the people who went to hear her speak in Council Bluffs, Iowa were buying it:

Spending cuts or no, the debt limit “never should have been raised,” sighs Anita Cote, who’s come to the rally with her husband. A few years back they sold their clothing store and retired, and they had been doing well, but they have friends who aren’t thriving. They see the spending coming out of Washington and identify a culprit. “You’d never run a business that way, and the people didn’t want it to be raised.”

Of course, Bachmann is completely mis-representing what S&P said when it released its report lowering our credit rating on Friday evening, especially with regard to the debt ceiling. First, it’s absolutely essential to note that Standard & Poor’s did not cite raising the debt ceiling as a factor that at all weighed in their decision to downgrade American debt. Instead, this is what they actually said:

We lowered our long-term rating on the U.S. because we believe that the prolonged controversy over raising the statutory debt ceiling and the related fiscal policy debate indicate that further near-term progress containing the growth in public spending, especially on entitlements, or on reaching an agreement on raising revenues is less likely than we previously assumed and will remain a contentious and fitful process. We also believe that the fiscal consolidation plan that Congress and the Administration agreed to this week
falls short of the amount that we believe is necessary to stabilize the general government debt burden by the middle of the decade.

Our lowering of the rating was prompted by our view on the rising public debt burden and our perception of greater policymaking uncertainty, consistent with our criteria (see “Sovereign Government Rating Methodology and Assumptions” June 30, 2011, especially Paragraphs 36-41). Nevertheless, we view the U.S. federal government’s other economic, external, and monetary credit attributes, which form the basis for the sovereign rating, as broadly unchanged.

In other words, it wasn’t the fact that we raised the debt ceiling that was the problem as S&P saw it, it was the fact that it took us six weeks of mostly pointless negotiation to do it, with a final deal at the last minute that didn’t even meet the recommendations that they had made back in April. Moreover, while they don’t mention it specifically, one could argue that the manner in which the deal cuts spending in the future is part of the uncertainty and lack of predictability that the report talks about. You can criticize S&P for their conclusion that these political factors justified a lowering of the debt rating, and many have. However, it’s fairly clear that the reasoning behind that decision had nothing to do with the fact that we raised the debt ceiling, and everything to do with the policy uncertainty that people like Michele Bachmann created with their insane idea that we don’t need to raise the debt ceiling at all.

It’s easy for Bachmann to sit back now and claim that if we’d only listen to her things would be better, because nobody is ever going to be able to prove her wrong to the satisfaction of her fanatical supporters. Nonetheless, it’s fairly clear that she was among the more irresponsible members of the Tea Party Caucus throughout the whole debt ceiling debate. If her GOP opponents had any guts, they’d call her out for it.

Photo via The Blaze