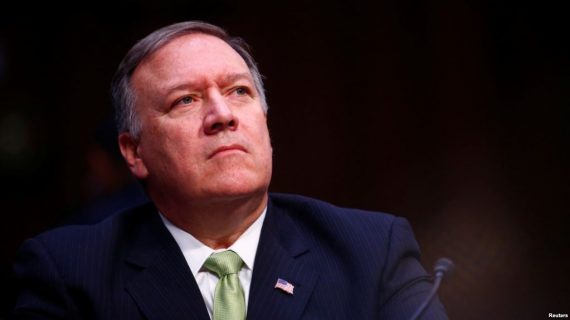 As expected, the Senate voted earlier today to confirm now-former C.I.A. Director Mike Pompeo to be the 70th Secretary of State of the United States:

WASHINGTON — The Senate on Thursday easily confirmed Mike Pompeo as the nation’s 70th secretary of state, elevating the current C.I.A. director and an outspoken foreign policy hawk to be the nation’s top diplomat.

In the end, the 57-to-42 tally lacked the drama of other nail-biting confirmation votes in the Trump era. Earlier this week, Senator Rand Paul of Kentucky, the nominee’s main Republican antagonist, bowed to pressure from President Trump to drop his objections. Ultimately, seven members of the Senate Democratic caucus — five of whom face re-election this year in states that Mr. Trump won in 2016 — joined a united Republican conference to support Mr. Pompeo’s confirmation.

Mr. Pompeo was expected to be sworn in almost immediately after the vote, after which he planned to dash to Joint Base Andrews, where a plane was waiting to fly him to Brussels on his first trip abroad as secretary of state for a meeting of NATO allies.

His agenda is already packed, with crucial deadlines in the coming weeks involving Russia, North Korea, Syria and Venezuela. And he must face these challenges while trying to a repair a State Department damaged under the tenure of Rex W. Tillerson, his predecessor, and with crucial alliances frayed during the Trump presidency.

Senators were mindful of the need to get Mr. Pompeo in place, given the crush of work facing him. His confirmation seemed all but assured after Senator Heidi Heitkamp of North Dakota, a Democrat who is running for re-election in a state that Mr. Trump won by a wide margin, said last week that she would support him.

For Democrats who will be on the ballot in Trump states, a vote against Mr. Pompeo could have exposed them to attacks from the Republicans, including Mr. Trump, eager to label them obstructionists.

Mr. Pompeo also managed to avoid what would have been an embarrassing rebuke on his way into the new post, as the Senate Foreign Relations Committee had seemed likely to not recommend his confirmation. But Mr. Paul, an outspoken foe of interventionist foreign policy, relented just before the committee’s vote on Monday.

As secretary of state, Mr. Pompeo will also have to navigate the rivalries within the Trump administration. At the White House, John R. Bolton, the administration’s third national security adviser in a little over a year, is presiding over another purge of top assistants. Mr. Pompeo must forge a working relationship with Mr. Bolton as he creates alliances with the White House chief of staff, John F. Kelly, Defense Secretary Jim Mattis, and the president’s son-in-law and top adviser Jared Kushner.

But handling Mr. Kushner will be a delicate matter. Mr. Kushner’s diplomatic portfolio includes forging a Middle East peace deal and safeguarding the relationship with Mexico even as Mr. Trump pursues his hard-line immigration policies and wall on the southern border.

Mr. Pompeo will also have to mend fences with the American ambassador to the United Nations, Nikki R. Haley, whose relationship with Mr. Tillerson was so strained that she ordered his portrait removed from her New York offices. She was absent from this week’s state dinner with French President Emmanuel Macron.

Pompeo will have to hit the ground running. In addition to an upcoming anticipated meeting between President Trump and the leader of North Korea, he’ll have some more immediate issues to see to over the coming days and weeks:

Within hours of his landing in Europe, he will preside over a breakfast meeting at NATO headquarters to discuss new measures to counter an increasingly aggressive Russian president, Vladimir V. Putin, who U.S. intelligence officials say has ordered the annexation of Crimea, intervention in Ukraine, the hacking of the American election in 2016 and murders or attempted murders of countless rivals, including a former Russian spy living in Britain. He has maintained his military and diplomatic support for Syrian President Bashar al-Assad despite the massacre of civilians and the use of chemical weapons.

The gathering will thrust Mr. Pompeo into the core contradiction of the Trump presidency, which is staffed with hawks pushing for an increasingly tough line against Moscow but is headed by a president who hopes for improving ties while facing an investigation by Robert S. Mueller III, the special counsel, into whether his campaign colluded with Russia during the 2016 election campaign.

In two weeks, Mr. Trump is also set to announce whether he will exit the Iran nuclear deal, struck by President Barack Obama and the leaders of Russia, Britain, France, Germany and China. Leaving the deal would further fray ties with Europe, but failing to scrap the deal would violate a core campaign pledge.

Mr. Pompeo was once a voluble member of the Republican chorus opposing the pact. But in his confirmation hearing, Mr. Pompeo promised to try to preserve the accord, one of several pledges he made that were at odds with his record as a four-term Tea Party congressman from Kansas. This week, Mr. Trump also signaled he may preserve the deal.

In addition, Mr. Pompeo will have to help forge a strategy to deal with a splintering Syria, something administration officials have openly acknowledged they lack, decide whether to launch a trade war with China, and choose whether to impose new sanctions against Venezuela following the expected re-election of President Nicolas Maduro on May 20 in a campaign widely seen as undemocratic.

I’ve made my objections to Pompeo quite well-known in the past. While he was a Congressman from Kansas he engaged in rhetoric that raises serious questions about the type of advice he will be giving to the President, as do the ties he forged with anti-Muslim organizations and persons such as Pamela Gellar, who has at the center of anti-Muslim hate speech for more than a decade now. Given those ties, it’s difficult to see how he can credibly maintain a good relationship with the Muslim world. Additionally, his position with respect to the nuclear deal with Iran, a view that reinforces that taken by Trump’s new National Security Adviser John Bolton that would seem to make it more likely that Trump would take the foolish step of pulling the United States out of that agreement and thus potentially precipitating a crisis in the Middle East. Ideally, the President would select a Secretary of State who can not only represent the United States abroad but also provide the President with advice that may often conflict with the President’s own positions, and to advise him against action that may be detrimental to American interests. Perhaps Pompeo will exceed my expectations, and I suppose the best we can hope for is that he does.