The selection of Mike Pompeo as the next Secretary of State makes it more likely that President Trump will take the foolish and dangerous step of withdrawing the United States from the nuclear deal with Iran. 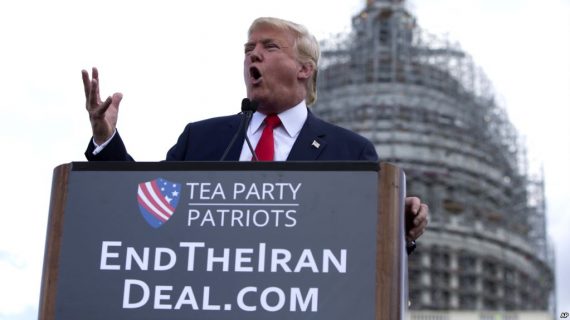 The announcement that former Congressman and current C.I.A. Director Mike Pompeo is President Trump’s choice to succeed Rex Tillerson appears to make it more likely that President Trump will go forward with pulling out of the nuclear deal with Iran:

WASHINGTON (AP) — The Iran nuclear deal was in near terminal condition and on life support even before President Donald Trump fired Secretary of State Rex Tillerson. Tillerson’s dismissal this week may hasten its demise.

As CIA chief and Iran hawk Mike Pompeo prepares to run the State Department, the Trump administration is weighing a speedier withdrawal from the agreement than even the president has threatened, according to two U.S. officials and two outside advisers briefed on the matter. They were not authorized to discuss the sensitive negotiations publicly and spoke on condition of anonymity.

While such a scenario is unlikely, the fact it is being floated as an option may give U.S. officials more leverage in negotiations with European signatories to salvage the accord by toughening it. Two such negotiating sessions have already been held and a third is set for Thursday in Berlin.

Trump, who calls the Obama administration’s signature foreign policy achievement the worst deal ever negotiated, has vowed to walk away from the 2015 agreement in mid-May unless Britain, Germany and France join the U.S. in addressing what the president says are its fatal flaws. These include no penalties for Iran’s missile work and support for militant groups in Lebanon, Syria, Yemen and elsewhere.

The deal that was negotiated by the Obama administration and six other countries limits Iran’s enrichment and stockpiling of material that could be applied to a nuclear weapons program. In exchange, Tehran was granted widespread relief from international trade, oil and banking sanctions. Trump’s next deadline to extend some of those concessions is May 12, and he has vowed not to do so again unless the Europeans meet his demands.

Any U.S. withdrawal would likely crater the agreement. If the U.S. begins threatening fines and other punishments for sanctions violations, countries around the world are likely to curtail commerce with Iran. That could prompt the Iranians to walk away as well, and perhaps even restart nuclear activities banned under the accord.

An indication of the Trump administration’s thinking could come Friday, when the U.S., Britain, China, France, Germany, Russia, the European Union and Iran meet for a periodic review at the International Atomic Energy Agency headquarters in Vienna.

State Department policy planning chief Brian Hook, who is running the negotiations with Europe, will lead the U.S. delegation to the larger meeting in Austria’s capital. Hook, who Tillerson leaned on heavily for policy advice and direction, could meet separately in Vienna with the Iranian delegation head, Deputy Foreign Minister Abbas Aragchi. For his part, Aragchi sees the writing on the wall. He told a parliamentary committee in Tehran on Wednesday that Tillerson’s ouster was proof that Trump would pull out and promised that Iran would withdraw if the U.S. does.

In the U.S., Iran deal supporters braced for what they see as the inevitable. Pompeo “is certain to advise the president to withdraw the United States from our obligations under the nuclear agreement,” said Diplomacy Works, a group of mainly former Obama administration officials that lobbies for staying in the deal.

Hook had been tasked by Tillerson with getting the Europeans to agree to as many of Trump’s demands as possible, with an eye toward selling the president on extending the sanctions waivers. Doing so would buy U.S. negotiators time to deal with elements of the agreement Trump has disparaged — such as its expiration dates on key nuclear constraints — and missile and terrorism concerns.

With Tillerson gone, the emphasis will likely change.

The ex-oilman had waged an often lonely battle within Trump’s Cabinet to save the deal. He succeeded for 13 months. But each time Trump faced another sanctions deadline, Tillerson met increased resistance to keeping the agreement alive.

In firing Tillerson on Tuesday, Trump in particular noted his disagreement over the Iran accord. Trump won’t have that problem with Pompeo, who has lambasted the deal on a level similar to Trump, making clear the two men are of the same opinion.

Trump said that he and Pompeo “have a very similar thought process” on the deal.

As a congressman, Pompeo vociferously denounced the accord when it was struck.

“The (deal) can perhaps delay Iran’s nuclear weapons program for a few years,” he wrote at the time. “Conversely, it has virtually guaranteed that Iran will have the freedom to build an arsenal of nuclear weapons at the end of the commitment.”

While it’s by no means certain that Trump will take the somewhat radical step of pulling the United States completely out of the Joint Comprehensive Plan of Action (JCPOA) as the deal is formally known, all of his previous rhetoric and actions are certainly pointing in that direction. During the campaign for the Republican nomination, for example, Trump repeatedly attacked the deal, often using false information to attack the merits of the deal and to claim that he could have negotiated a better deal. In September 2015, while Congress was considering the agreement, Trump co-hosted a rally with fellow Republican candidate for President Ted Cruz seeking to rally support against the agreement. In the end, of course, that effort failed and the deal went into effect, but that didn’t stop Trump from continuing to criticize the deal during the primary and the general election.

Once he became President, Trump’s disdain for the deal and his eagerness to follow through on his campaign promise to seek to either renegotiate the deal or pull out of it completely was rather obvious. Despite that rhetoric, Trump passed on his first opportunity to renege on the deal last May when his Administration ended up lifting another set of sanctions as called for under the agreement. It was clear at the time, though, that Trump was only doing this reluctantly and that the deal was in real danger of falling apart thanks to the unilateral action of the United States. The next step, of course, came in October when President Trump declined to certify to Congress that Iran was complying with the deal. While decertification didn’t formally withdraw the United States from the agreement or result in an effort by the Administration to reimpose sanctions against Iran, it was taken by many at the time that this further step could come at any time in the future. Moreover, the decertification decision came notwithstanding the fact that the most prominent members of Trump’s foreign policy team, including Secretary of Defense James Mattis and soon to be former Secretary of State Rex Tillerson, had stated on the record that Iran was complying in the agreement and that staying in the JCPOA was in the national interest of the United States. Additionally, the International Atomic Energy Agency (IAEA), the agency charged with running the inspections called for under the agreement said that Iran is complying with the agreement in its most recent report on the agreement. Notwithstanding this, Trump asserted without any real evidence that Iran was violating the “spirit” of the agreement without specifying how that was the case. In support of his claim, Trump cited matters that were not covered by the terms of the JCPOA  such as Iran’s missile program, the foreign policy positions it has taken that are often adverse to those of the United States, and actions that took place in the past such as terrorist attacks that took place as long as twenty years or more in the past. Earlier this month, leaders of the U.K., France, and Germany took the time to issue a statement of support for the JCPOA and made clear that they did not support the position taken by the Trump Administration and continued to rebuff American efforts to renegotiate the deal even while attempting to negotiate some sort of side agreement that would placate the United States while keeping the core of the JCPOA intact. Finally, the other two parties to the agreement, Russia and China have made it clear that they don’t support this unilateral action on the part of the United States.

The next deadline coming up with regard to the JCPOA appears to be in May when the President must decide on whether or not to lift another round of sanctions. There’s at least some anticipation that he may use this opportunity to pull out of the deal entirely, especially if the current efforts to negotiate some kind of “side deal” prove to be unsuccessful, which they most likely will. The selection of Pompeo, who was a vehement opponent of the deal while he was in Congress, seems to make this more likely especially since it means that there will be one less voice inside the Administration speaking sanity to a President who seems to be more interested in proceeding forward based on his own instincts, what he sees on Fox News Channel and the adulation he receives from the “yes men” that he likes to surround himself with.