Libby Copeland uses the occasion of Monica Lewinsky earning a master’s degree to reflect on the smart-but-dumb phenomenon.

There are moments that make you question your fundamental assumptions about the world. One of them took place a few days ago, when news emerged that Monica Lewinsky had just graduated from the London School of Economics.

Lewinsky, 33, is known more for her audacious coquetry than for her intellectual heft, and the notion of her earning a master of science degree in social psychology at the prestigious London university is jarring, akin to finding a rip in the time-space continuum, or discovering that Kim Jong Il is a natural blond.

Even more staggering, the same bubbly gal who once described the act of flashing her thong at the president as a “small, subtle, flirtatious gesture” has now written a lofty-sounding thesis. Its title, according to Reuters: “In Search of the Impartial Juror: An Exploration of the Third Person Effect and Pre-Trial Publicity.”

A revelation on this order suggests Lewinsky belongs to a fascinating subspecies, dumb-but-smart. Dumb-but-smart folks defy our low expectations. They appear dull or ditzy but possess unpredictable pockets of intelligence.

Jeralyn Merritt is proud: “You Go. Girl. More power to you. I spent years on tv night after night sticking up for you (and trashing Linda Tripp) and I’m glad it turned out so well for you.”

This is interesting on two levels. First, I’m not sure that there was any reason to think Lewinsky was dimwitted to begin with. She was educated at an expensive prep school and went on to a private liberal arts college. Even if one’s parents are wealthy, White House internships are difficult to secure. Second, I’m not sure that an MSc in a program designed “To qualify you for MPhil/PhD research in the social sciences” (i.e., essentially pre-Masters remedial work) is evidence that she’s on track for a Nobel Prize.

The jokes about Lewinsky centered on her chubbiness, her skankiness in keeping a semen stained dress around as a souvenir, her stupidity in thinking a president was going to leave his wife for that woman, and so forth — not a lack of intellect. 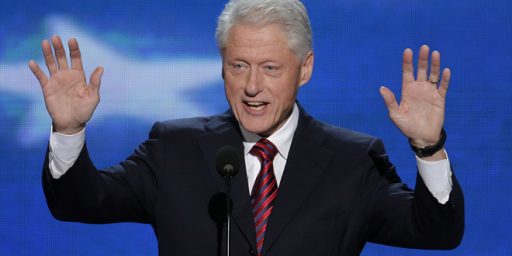