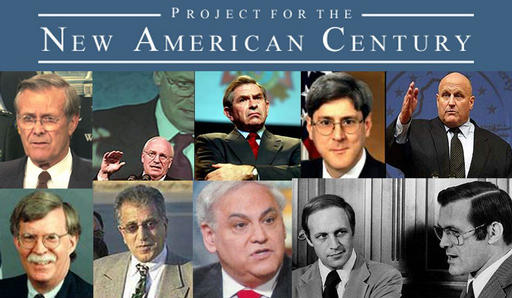 Allen McDuffee argues that think tanks have not only kept neoconservative ideas respectable but kept them influential in the Obama administration.

According to a May report (pdf) from the Brookings Institution, a Washington, DC think tank, neoconservatives associated with prominent figures like former Assistant Secretary of Defense Paul Wolfowitz, Weekly Standard Editor Bill Kristol and pundit Richard Perle are still broadly active, despite policy failures associated with the 2003 invasion of Iraq.

This is a bizarre charge.  All sorts of people and schools of thought associated with failed policies remain active and influential.  Jimmy Carter, for example.  Or Alan Greenspan.  Or Susan Estrich, who managed perhaps the worst presidential campaign in modern American history.

Stephen Walt, professor of international affairs at the Harvard Kennedy School and co-author of The Israel Lobby and U.S. Foreign Policy, says that the most obvious place the neocons are still influential is in U.S. policy toward Iran, where the Obama administration is “continuing the Bush administration’s basic approach, albeit with a ‘kinder, gentler’ face.”

He gives several paragraphs worth of examples.  Now, I oppose a militarist approach to Iran for a variety of reasons I’ve laid out in many posts over the last few years.   But supporting a “quite hawkish” approach including “the use of force against Iran if diplomacy doesn’t work” isn’t necessarily a neoconservative idea, even if the person espousing it is a neoconservative.

Neoconservative and hawk aren’t synonymous terms.    Properly understood in a foreign policy context, Neoconservativism advocates the use of force, yes, but with an eye to societal transformation rather than simply achieving military goals.   Arguing we should overthrow Iran’s government and then occupy  the country while trying to transform it into a model democracy is Neoconservative; arguing we should bomb the crap out of Iran’s nuclear facilities is possible within the framework of any number of schools of international relations policy.

Citing the American Enterprise Institute, the Hudson Institute, Project for a New American Century, Commentary, and The Weekly Standard, Vaisse writes “These younger neoconservatives have generally received their first internships and jobs, and published their first articles in the old network of friendly think tanks and publications built by the older generation of neoconservatives.”

One of the more recent and robust institutions, according to the report, is the Foreign Policy Initiative (FPI), created in the spring of 2009. Operating under the direction of Bill Kristol, Robert Kagan and Dan Senor, FPI is “animated by young operatives” and according to Vaisse “is already making its mark on the Afghanistan and human rights debates, notably by sending public letters signed by neocons and non-neocons alike,” a technique that is a hallmark of neocon action.

Financial support for these institutions, which comes from various conservative donors and foundations, such as the Scaife family, Bradley, Earhart, Castle Rock, and Smith Richardson foundations, “shows no sign of abating,” according to Vaisse.

Sustained financial, institutional and publication support has provided the platform necessary for neoconservatives to have influence long after they were broadly thought to have been run out of the White House.

It’s a story as old as think tanks themselves: take a simplistic idea, pay a few well-connected sociopaths to pimp the idea, give the sociopaths titles like “D. C. Searle Senior Fellow”, and voila—Kaplan opinion pieces, appearances on CNN, in short you have a ghastly mess.

I’m not sure I see the problem here.  There are all manner of liberal think tanks, policy institutes, foundations, and magazines funded by individuals and  groups who support liberal ideas.   So what?   While I suppose having some sort of institutional imprimatur is helpful — and, certainly, having a steady income is! — one still has to make persuasive arguments.

Perhaps more important than the institutions and financial support is the modus operandi of the neoconservatives, according to Janine Wedel, professor in the School of Public Policy at George Mason University and author of Shadow Elite. In particular, a small subset of neocons, a “neocon core,” has been working together for more than 30 years “to remake American foreign policy according to their own vision.”

It wouldn’t be much of a movement if its members weren’t sticking together and advancing their vision.  Again:  So what?

The neocons are able to achieve their goals, according to Wedel, “by undermining the rules and standard processes of the government they supposedly serve and supplanting them with their own, all the while making public decisions backed by the power and resources of the state.” Because their undermining of these processes often goes undetected, it is likely many remain in place under the Obama administration.

While the report points out that Obama’s foreign policy team is composed of liberals and realists “whose positions are far from the neocons,” Vaisse also recognizes that “opposition is not total.” On occasion, neoconservatives coordinate with liberal groups on human rights issues, or engage in conversations with senior administration officials, but they “lined up behind the administration” on the war effort in Afghanistan — this time against the liberal left and some realists in both parties, according to the report.

I don’t understand what the charge is here.  Neocons are pushing their own agenda against that of the more predominant liberals?  There’s a shocker!   But, hell, during the Evil Bush Administration — the heyday of neoconservative power and influence — liberals and Realists were pushing back, too.   And, indeed, they ultimately managed to push out the Rumsfelds, Wolfowitzes, and Feiths in favor of people more like themselves.

Vaisse also points out that just as important as the neocons’ persistence and coordination with non-neocons is the fact that American foreign policy is cyclical and that frustration with the Obama administration’s “realist and pragmatic” approach will “inevitably create a more congenial environment for the neocons.”

The nature of power in a democracy is that, eventually, the people will grow tired of the direction the leadership is taking the country and non-scary alternative visions will be given a chance.  But substantial deviation from the middle road tends to be corrected rather quickly.

Indeed, the reason the Obama foreign policy looks so much like the Bush foreign policy is that the latter had been radically transformed by 2006 into something resembling the Realist Consensus that has dominated American foreign policymaking for decades.   The brief interludes where hard core Idealists or Neoconservatives dominated are exceptional.

UPDATE: McDuffee writes to tell me that I “incorrectly took the article as an opinion piece rather than the reporting piece it is. I was reporting on a provocative report produced by Justin Vaisse at Brookings.”

The placement in the hard left Raw Story primed me to think it was an opinion piece and the fact that all the sources were from the same ideological perspective didn’t dissuade me from that view.  Regardless, my arguments are against the points being aggregated in McDuffee’s piece rather than against McDuffee’s personal views, to which I am not privy. 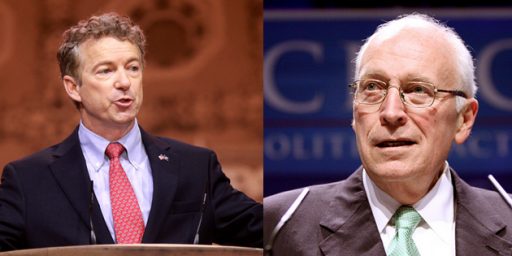