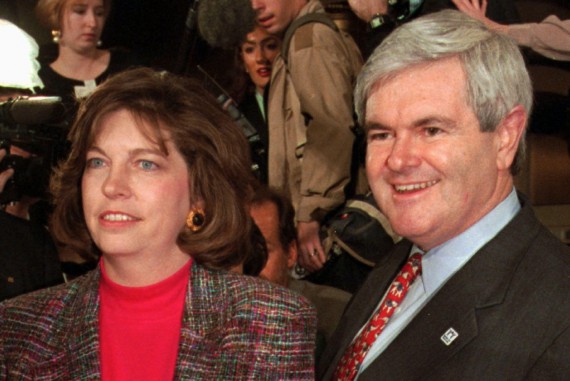 The political world was set abuzz last night when The Drudge Report dragged out the siren and the 20-point type hinting at a story about a “blockbuster” campaign interview that had set off a “civil war” inside ABC News over whether or not it should be aired prior to the South Carolina Primary. For many, it brought back memories of a night 14 years and one day previously when Matt Drudge broke the story about Newsweek sitting on a story about President Clinton and a White House Intern, and we know how that turned out. This time, it turned out to be news that Newt Gingrich’s second wife Marianne had sat down with ABC News for an interview:

Marianne Gingrich, second wife of Newt, once bragged she could end her husband’s career with a single interview.

Drudge Report is now reporting that ABC News has landed that “blockbuster” interview, but is having a ”civil war” over when to air it:

ABCNEWS suits determined it would be “unethical” to run the Marianne Gingrich interview so close to the South Carolina Primary, a curious decision, one insider argued, since the network has aggressively been reporting on other candidates.

A decision was tentatively made to air the interview next Monday, after all votes have been counted.

Gingrich canceled a press conference on Wednesday to deal with the matter.

“He believes that what he says in public and how he lives don’t have to be connected,” Marianne Gingrich, Newt’s wife of 18 years, explained to ESQUIRE last year.

A knowledgeable source at ABC News downplayed this angle, telling POLITICO that the interview would in all likelihood air tomorrow.

As it turns out, that is exactly what’s going to happen. The interview will air on tonight’s Nightline, with excerpts being released to the press beforehand, most likely before tonight’s CNN Debate which starts at 8pm Eastern. Additionally, we learned later in the evening that Marianne Gingrich doesn’t say anything in the ABC interview that she hasn’t said before, including in an Esquire interview that ran back in August of 2010. Nonetheless, there’s sometimes a difference between saying something in print and saying it in front of a camera, especially when you’re going to say stuff like this:

Marianne Gingrich, his closest advisor during his last fit of empire building, sits on the boardwalk chain-smoking her breakfast.

He thinks of himself as president, you tell her. He wants to run for president.

She gives a jaundiced look. “There’s no way,” she says. She thinks he made a choice long ago between doing the right thing and getting rich, and when you make those choices, you foreclose other ones. “He could have been president. But when you try and change your history too much, and try and recolor it because you don’t like the way it was or you want it to be different to prove something new … you lose touch with who you really are. You lose your way.”

She stops, ashes her cigarette, exhales, searching for the right way to express what she’s about to say.

“He believes that what he says in public and how he lives don’t have to be connected,” she says. “If you believe that, then yeah, you can run for president.”

Early in May, she went out to Ohio for her mother’s birthday. A day and a half went by and Newt didn’t return her calls, which was strange. They always talked every day, often ten times a day, so she was frantic by the time he called to say he needed to talk to her.”About what?”

He wanted to talk in person, he said.

“There’s somebody else, isn’t there?”

She kind of guessed it, of course. Women usually do. But did she know the woman was in her apartment, eating off her plates, sleeping in her bed?

She called a minister they both trusted. He came over to the house the next day and worked with them the whole weekend, but Gingrich just kept saying she was a Jaguar and all he wanted was a Chevrolet. ” ‘I can’t handle a Jaguar right now.’ He said that many times. ‘All I want is a Chevrolet.’ ”

He asked her to just tolerate the affair, an offer she refused.

He’d just returned from Erie, Pennsylvania, where he’d given a speech full of high sentiments about compassion and family values.

The next night, they sat talking out on their back patio in Georgia. She said, “How do you give that speech and do what you’re doing?”

I have no idea what kind of impact this will all have, especially this close to the primary in South Carolina. It could blunt Newt’s rise, it could case conservatives rally around him. At the very least, though, the Gingrich campaign is concerned because they already started releasing statements last night. At the very least, they’re worried.