Score one for Team Bush? 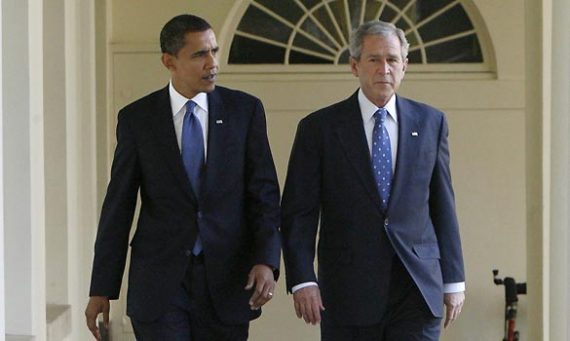 Rowan Scarborough thinks he has a gotcha:

The Obama national security team that wants to go to war with Syria and demonizes President Bashar Assad is the same group that, as senators, urged reaching out to the dictator. As a bloc on the Senate Committee on Foreign Relations, President Obama, Secretary of State John F. Kerry, Defense Secretary Chuck Hagel and Vice President Joseph R. Biden all opposed the George W. Bush administration’s playing tough with Mr. Assad.

As ledes go, this is pretty silly. It’s hardly a failing to hope that a transition in power will serve as an opportunity for improved relations, much less to change course once this hopes prove unfounded. As John Maynard Keynes is often quoted as saying, even if he never did, ”When the facts change, I change my mind. What do you do, sir?”

The back story, though, is interesting in that its a case where the previous administration’s instincts seem to have been better.

None grew closer to Mr. Assad and promoted him in Washington more than Mr. Kerry.

“President Assad has been very generous with me in terms of the discussions we have had,” Mr. Kerry, as a senator from Massachusetts, told an audience at the Carnegie Endowment for International Peace in March 2011. He predicted that Mr. Assad would change for the better.

But that same month, pro-democracy demonstrations erupted in Syria that would lead to a civil war, unmasking Mr. Assad’s brutal tactics, including the Aug. 21 unleashing of nerve gas that killed more than 1,400 civilians.

Today, Mr. Kerry is a leading advocate for attacking Mr. Assad’s regime. On Friday, he called the man he once befriended a “thug and murderer.”

Again, though, I’m not sure what this proves. I oppose Kerry’s policy aim—US military action in Syria—but concur wholeheartedly in his current assessment of Assad.

When Mr. Assad succeeded his late father, Hafez, as dictator in July 2000, there was hope in Washington that the young ophthalmologist who was trained in London would shift the country from its brutal ways in neighboring Lebanon and its deep association with Iran and terrorism.

But in the Bush administration’s view, Mr. Assad proved as devious as his father. He increased ties to Hezbollah and Hamas, two U.S.-designated terrorist groups backed by Iran, and grew even closer to Iran, which used Syria to pass rockets to terrorists. In 2005, the Assad regime rocked Lebanon by playing a role in Hezbollah’s assassination of former Lebanese Prime Minister Rafik Hariri, who had led an anti-Syrian bloc in Beruit. By that year, Mr. Assad had begun helping al Qaeda by opening his country to jihadists who passed through the Damascus airport on their way to safe houses and then across the border into Iraq, where they killed U.S. troops. The Bush administration made repeated demands in Damascus for Mr. Assad to stop the flow of al Qaeda killers but saw no progress. Noting that behavior, the Bush national security team refused to engage Mr. Assad in peace talks until he changed.

Secretary of State Condoleezza Rice explained the administration’s position on Mr. Assad to the Senate Committee on Foreign Relations in 2007. ”If there were any evidence, any hint, that Syria was changing its course — and it should just change its course — we don’t have an ideological problem with talking to Syria,” Ms. Rice testified. “We’ve talked with them under this administration. We could do it again. ”But the problem is, they are not engaging in constructive behavior. And we don’t see how that would change, currently, by talking to them.”

Mr. Biden, then the committee’s chairman, scolded her and reminded her of her duties. ”I do not agree with your statement, Madame Secretary, that negotiations with Iran and Syria would be extortion, nor did most of the witnesses we heard in this committee during the last month,” Mr. Biden said. “The proper term, I believe and they believe, is diplomacy, which is not about paying a price but finding a way to protect our interests without engaging in military conflict. It is, I might add, the fundamental responsibility of the Department of State, to engage in such diplomacy, as you well know.”

When it was his turn, committee member Mr. Hagel asked three times why Ms. Rice would not engage in direct talks with Mr. Assad. ”Have you included in those conversations, whether second- or third-party conversations, Iran and Syria?” Mr. Hagel said. “Because I don’t know how we could come up with any kind of a plan or focus, working with the United Nations or anyone else, if Iran and Syria are not included in that.”

One of Mr. Obama’s major foreign policy positions as a senator was unconditional direct talks with the leaders of Iran over its quest for nuclear weapons. He also favored talks with Mr. Assad. Once in office, Mr. Kerry became his main emissary to Damascus, engaging in talks there in 2009, a month after Mr. Obama took office, and 2010, marking his third and fourth visits as a senator.

Before the 2009 visit, the U.S. Embassy in Damascus sent a cable to Mr. Kerry and other senators on the trip. ”You should expect an enthusiastic reception by government officials of the Syrian Arab Republic (SARG) and from the media, who will interpret your presence as a signal that the [U.S. government] is ready for enhanced U.S.-Syrian relations,” said the cable, published by the anti-secrecy website WikiLeaks. “Your visits over the course of February 17-22 form a trifecta that Syrians will spin as evidence of the new Administration’s recognition of Syria’s regional importance.”

At the Carnegie Endowment for International Peace in 2011, Mr. Kerry was full of praise for Mr. Assad as the civil war in Syria erupted, and he predicted that the dictator would become a good actor. ”So my judgment is that Syria will move,” he said. “Syria will change as it embraces a legitimate relationship with the United States and the West and economic opportunity that comes with it and the participation that comes with it.”

That month, Secretary of State Hillary Rodham Clinton, another alumnus of the Senate Committee on Foreign Relations, told “Face the Nation” on CBS that lawmakers who had visited Mr. Assad considered him a “reformer.” The U.S., she said, did not need to contemplate military action against Syria. ”There’s a different leader in Syria now,” Mrs. Clinton said. “Many of the members of Congress of both parties who have gone to Syria in recent months have said they believe he’s a reformer.”

Did the Bush, Rice, and others in the administration correctly assess Assad while Biden, Hagel, and Clinton got it wrong? Maybe. But it’s not obvious from the exchanges above. Biden and Hagel, in particular, were simply urging diplomatic engagement with Assad; that’s a rather sensible position.