The Happy HoHoHolidays Edition OTB Caption ContestTM is now over.

The Happy HoHoHolidays Edition OTB Caption ContestTM is now over. 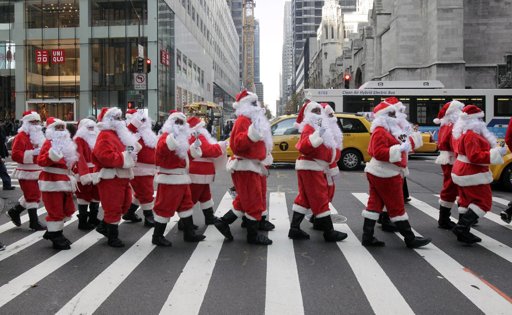 bk – One of the rejected cover ideas for “Abbey Road”

Anderson – Striking Santa’s Helpers are holding out for a 30% wage hike, but the North Pole has announced it will file for Chapter 11 and liquidate Christmas first, not to mention placing all 800 strikers on the “naughty” list.

PeterH – The 1st Santa battalion assembles for the War on Christmas…..as they jingle all the way…

John Burgess – “Shh… it’s a secret, but the one with the bare feet is dead!”

Gromitt Gunn – Santa’s “Helpers” (aka scabs) prepare to the cross the picket line during the Great Elf and Reindeer Strike of 2012.

I am the Walrus goo goo ga joob.

Imagine there’s no Santa, It’s easy if you try….

Occupy North Pole had certain side effects on the participants.

Obama’s special task force for the redistribution of economic resources.

In New York their life expectancy pretty much followed the Star Trek model.