The Semper Dry or Damper Fi Edition OTB Caption ContestTM is now over.

The Semper Dry or Damper Fi Edition OTB Caption ContestTM is now over. 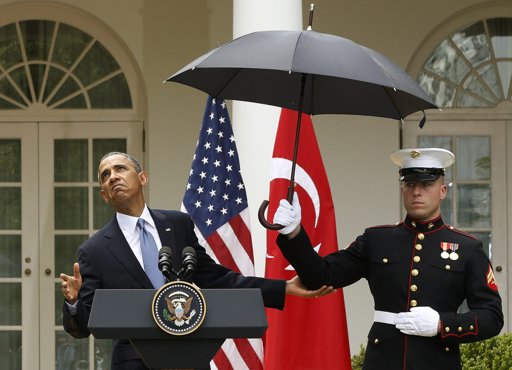 First: Steven L. Taylor – “Hmm. Cloudy with a chance of a ridiculous shitstorm.”

Second: Stormy Dragon – And with the Obama family happily reunited, it was time for Marine Poppins to leave, for there were other politician families who still needed his help.

Third: markm – Obama: “…rain?!?!?… I just learned about the forecast…at the same time you guys did”

Patrick McCain – “… and another one for my teleprompter, Corporal.”

Michael Hamm – Where is the Blue Angels flyover? Oops – I sequestered them.

Donald Sensing – “Hey! What happened to my sidearm?”

OzarkHillbilly – “I told you pigeons are all Republicans.”

“Hmmmm… Nothing like a little bad weather to take peoples minds off political scandals.”

Obama (to press): “Hey, I know Susan Rice told you there would be no rain today… but you know how she lies.”

Obama: “Where could you have been better placed to protect the Presidency?”
Marine: “Benghazi, Mr. President.”

The Thursday Contest already has the Metrosexual App.