The Senate yesterday confirmed a 37-year-old to a lifetime Court of Appeals seat.

So this happened yesterday:

The Senate voted Tuesday to confirm Allison Jones Rushing, 37, to the U.S. Court of Appeals for the 4th Circuit, making her the youngest federal judge in the country.

The Senate voted 53-44 to put Rushing into the lifetime court seat. Every Republican present voted for her. Every Democrat present opposed her.

Democrats raised a number of concerns with Rushing, who is a partner at the D.C.-based law firm Williams & Connolly. She worked for Alliance Defending Freedom, a conservative Christian organization that has been classified as a hate group by the Southern Poverty Law Center. She has argued that there were “moral and practical” reasons for banning same-sex marriage. And some lawmakers said she simply lacks the experience or legal ability to be a federal judge.

“She has practiced law for nine years. How many cases has she tried to verdict or judgment? Four. Has she been the lead attorney on any of those cases? No,” Sen. Dick Durbin (D-Ill.) said on the Senate floor. “That is the most scant, weakest legal resume imaginable for someone who’s seeking a lifetime appointment to the second-highest court of the land.”

Like most of President Donald Trump’s court picks, Rushing is also a member of the conservative Federalist Society, which has been driving Trump’s judicial selection process and funneling anti-abortion and anti-LGBTQ nominees to the White House.

“She is really considered one of the fast-rising stars in the legal profession,” he said. “She is clearly qualified to do this job.”

The Senate is voting on two more circuit court nominees this week, both of whom, like Rushing, are young, ideological and Federalist Society members.

On paper, at least, Rushing is poorly qualified for the Federal judiciary—let alone for an appellate judgeship. Still, as I noted on Twitter, such appointments are a “natural consequence of making the judiciary rather than the elected branches the place where our most important domestic policies are decided: we’re going to get ever younger, less-qualified, and more ideological judges.”

I received some pushback from NYkrinDC, who wondered, “Is that an actual trend for both parties, or something that Trump and the GOP are trying to do now. Obama nominated Merrick Garland to the Supreme Court, he was hardly an ideologue, in fact, many on the far left felt he was too centrist.”

But Garland was a decided outlier. Indeed, when Obama first announced the choice, I was struck by how old he was. At 63, he was considerably older than most recent Supreme Court nominees. Additionally, Garland was widely considered a “moderate”—one praised on the record by many Republican Senators—and had impeccable credentials as a prosecutor and judge.  But, as Doug Mataconis noted at the time, that was likely the point:

It’s arguably the case that the President has selected Judge Garland as part of an effort to back the GOP into a corner on its “No Hearings, No Votes” position and put the maximum amount of political pressure on them. In addition to the fact that several sitting Senators have said in the past that Garland would be a good Supreme Court nominee, the Administration can point to the fact that the Senate has previously considered Garland for a judicial position and that he was overwhelmingly approved by a Republican-controlled Senate. Indeed, one can make the case that if it were not for the fiscal issues that surrounded his appointment that had nothing to do with his qualifications he probably would have been confirmed unanimously.

Obviously, Obama underestimated the shamelessness of Mitch McConnell and company in playing hardball. They withstood the public pressure to give Garland a vote, Donald Trump surprised everyone by winning the election, and the seat vacated by Antonin Scalia’s death was instead filled by conservative Neil Gorsuch.

Still, there has been a trend in recent decades toward younger justices. As David Ingold wrote for Bloomberg when Gorsuch was appointed,

Since World War II, the average age when a judge leaves the court, either through retirement or death, has been increasing. With two current justices more than 80 years old and a third joining them next year, the projected age when a justice will leave the Supreme Court is now about 83—that’s a 10-year increase from the 1950s.

At the same time, modern justices are joining the court at a younger age than in decades past. In 1900, justices tended to be in their late 50s when they joined the court.Today, the average age is about five years younger, and President Donald Trump’s nomination of Gorsuch, currently 49 years old, only furthers that trend.

This is part of the calculation for modern presidents when choosing whom to nominate—a younger justice who can spend more time on the court maximizes a president’s impact. The justices appointed by Presidents Barack Obama and George W. Bush—Elena Kagan, Sonia Sotomayor, Samuel Alito and John Roberts—were all 55 or younger when they joined the court. And if they serve into their early 80s, Obama and Bush could see their influence on the court for the better part of 30 years.

The accompanying graphic is instructive: 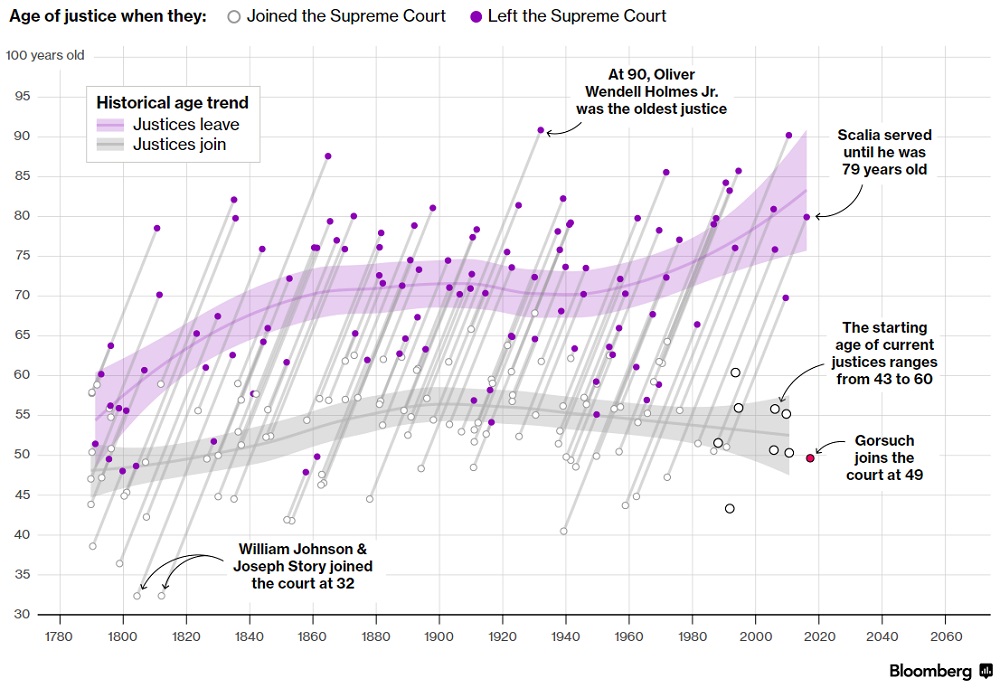 Eric Ostermeier, writing almost a decade ago, argued that this is something of a myth:

The conventional wisdom is that as the nomination and appointment process of Supreme Court justices has become more and more political (along with the decision-making of the Court itself), the more likely it is that Presidents will nominate men and women to the bench that are youthful. Younger, and thus, more likely than not, longer-serving justices, maximize the opportunities for the president to have a greater legacy in shaping the judicial (and political) philosophy of the Court.

But are Supreme Court Nominees getting younger?

A Smart Politics analysis of the 110 Supreme Court Justices (and 112 confirmations) in U.S. history finds Sotomayor to actually be slightly older (54.9 years) than the average age of all justices, past and present, at the time of their respective confirmation (52.8 years).

Moreover, the average age of successful nominees has actually been getting older in recent decades.

· In the 1980s, the average age for the three justices confirmed (Sandra Day O’Connor, Antonin Scalia, Anthony Kennedy) was 50.7 years.

· The average age at the time of confirmation for Justices John Roberts and Samuel Alito was 52.5 years. If Sotomayor, who turns 55 this month, is confirmed, that would raise the average age to confirmed nominees in the 2000s to 53.3 years.

Taking a longer view reveals justices confirmed today to be virtually the same age as those confirmed in the early and mid 1900s. The average age of the 45 Supreme Court justices who took the bench from Oliver Wendell Holmes, Jr. (in 1902) through John Stevens (in 1975) was 54.9 years old – the precise age of Sotomayor.

But, not only have subsequent appointees been younger, looking at the entire history of the Court skews the perception given how much longer people now live. Indeed, Ostermeier acknowledges as much:

And while the six decades with the lowest average age of Supreme Court justices at the onset of their service all took place between the 1780s and the 1860s, it is also true that the life expectancy was about half then as it is today – virtually necessitating the nomination of younger justices to the Court. (According to the Bureau of the Census, the average life expectancy at birth for a white male in 1850 was 38.3 years, compared to over 75 years today).

Still, NYkrinDC seems to have a point vis-a-vis Republicans being more likely to point younger justices than Democrats.  A February 2012 Alliance for Justice report on overall judicial appointments (that is, including the far more numerous seats on the District and Circuit courts, not just SCOTUS) found that:

If you examine the age distribution of Obama’s nominees, it is apparent that they skew marginally toward the upper 50s, raising his average above his predecessors.

That’s particularly interesting when one considers Obama enjoyed a majority in the Senate during the period in question. The 111th Congress (2009-2011) fluctuated between 58 and 56 Democratic Senators and the  112th (2011-2013) had 51 Democrats plus 2 nominal Independents who caucused with the Democrats. I don’t have data for appointees during Obama’s second term, the second half of which featured a Republican majority in the Senate.

Looking only at the current membership on the Supreme Court, Republican Presidents seem to have valued youth slightly more than Democrats. The age at the time of confirmation, from youngest to oldest:

The two youngest appointees were Republican and the two oldest were Democrats. Even more oddly, the two oldest were appointed by Bill Clinton early in his first term when he had a strong Democratic majority in the Senate and were both confirmed with overwhelming bipartisan votes. Had Merrick Garland been confirmed, the three oldest Justices at the time of confirmation would all have been Democrats—two of them over 60.

UPDATE: Here’s a kicker, from the HuffPo piece quoted at the beginning of the post:

Trump is dramatically reshaping the nation’s federal courts. With Rushing’s confirmation, he has now gotten 32 circuit judges, 53 district judges and two Supreme Court justices confirmed. That’s so many circuit judges ― more than any other president confirmed by this point in his first term ― that 1 in 6 seats on U.S. circuit courts is now filled by a judge nominated by Trump.