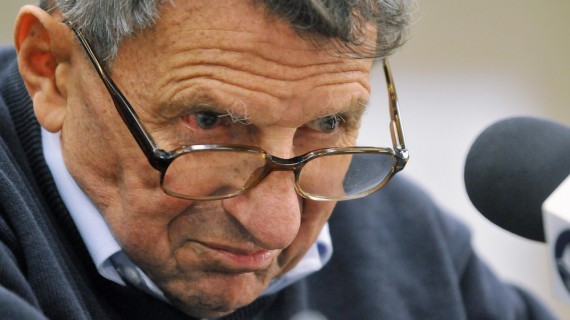 The Board Of Trustees of Pennsylvania State University announced late tonight that Joe Paterno and the President of the University have been fired in the wake of a widening child sex abuse scandal:

Penn State football coach Joe Paterno was fired late Wednesday night as the result of a growing child-sex scandal that has engulfed the program. The move is effective immediately meaning he will never coach for the school again. President Graham Spanier was also fired.

Earlier in the day, Paterno, the winningest coach in FBS history, had announced that he would retire at season’s end, allowing him to coach the Nittany Lions’ final home game this Saturday against Nebraska. After an afternoon of calls for the coach’s immediate removal, the board called the emergency meeting.

It caps a fifth day since the revelation of a grand jury investigation that led to 40 charges relating to alleged sexual abuse of children, some of it allegedly occurring within Penn State football facilities, by longtime and former Penn State assistant Jerry Sandusky.

According to the grand jury report, Paterno was first notified of the alleged abuse in 2002 by then-graduate assistant and current assistant coach Mike McQueary, who reported seeing Sandusky in the Penn State showers with a 10-year-old boy. Paterno notified the athletic director, Tim Curley, and a vice president, Gary Schultz. Both Curley and Schultz have been charged for their failures to report the information to authorities. Both men also stepped down from the school on Sunday.

It’s a sad end to an illustrious career. The coach holding the record for the most wins in the history of college football has been fired in disgrace because he looked the other way when informed of a horrible,  horrible crime. There really aren’t any winners here.