Inspired no doubt by President Obama’s visit to China, American editorial writers and columnists are seizing on the opportunity to pile on China. In his column today Paul Krugman takes China to task over its policy on its currency:

Despite huge trade surpluses and the desire of many investors to buy into this fast-growing economy — forces that should have strengthened the renminbi, China’s currency — Chinese authorities have kept that currency persistently weak. They’ve done this mainly by trading renminbi for dollars, which they have accumulated in vast quantities.

And in recent months China has carried out what amounts to a beggar-thy-neighbor devaluation, keeping the yuan-dollar exchange rate fixed even as the dollar has fallen sharply against other major currencies. This has given Chinese exporters a growing competitive advantage over their rivals, especially producers in other developing countries.

What makes China’s currency policy especially problematic is the depressed state of the world economy. Cheap money and fiscal stimulus seem to have averted a second Great Depression. But policy makers haven’t been able to generate enough spending, public or private, to make progress against mass unemployment. And China’s weak-currency policy exacerbates the problem, in effect siphoning much-needed demand away from the rest of the world into the pockets of artificially competitive Chinese exporters.

I think that Dr. Krugman is right about this and further believe that the asset inflation that has put us into the fix that we’re in right now can be traced to China’s decision to establish an effective peg of the yuan to the dollar by using the earnings it derived from its export to buy dollars and dollar-denominated securities. This decision followed a recession in China which underscored for them their problems in controlling their currency in the absence of such a peg.

That policy has been abetted by American politicians of both parties who’ve shrewdly observed that borrowing has been politically less painful than raising taxes or curtailing spending. That’s a process that may be grinding to a halt as observed by Niall Ferguson and Moritz Schularick:

Intervening in the currency market served two goals for China: by keeping the renminbi from rising against the dollar, it promoted the competitiveness of Chinese exports; second, it allowed China to build up foreign currency reserves (primarily in dollars) as a cushion against the risks associated with growing financial integration, painfully illustrated by the experience of other countries in the Asian crisis of the late 1990s. The result was that by 2000 China had currency reserves of $165 billion; they now stand at $2.3 trillion, of which at least 70 percent are dollar-denominated.

This intervention caused a growing distortion in the global cost of capital, significantly reducing long-term interest rates and helping to inflate the real estate bubble in the United States, with ultimately disastrous consequences. In essence, Chimerica constituted a credit line from the People’s Republic to the United States that allowed Americans to save nothing and bet the house on … well, the house.

Given the bursting of the debt and housing bubbles, Americans will have to kick their addiction to cheap money and easy credit. The Chinese authorities understand that heavily indebted American consumers cannot be relied on to return as buyers of Chinese goods on the scale of the period up to 2007. And they dislike their exposure to the American currency in the form of dollar-denominated reserve assets of close to $2 trillion. The Chinese authorities are “long” the dollar like no foreign power in history, and that makes them very nervous.

Writing in The Guardian Ambrose Evans-Pritchard draws what I think is the correct conclusion about China’s policy:

It is fashionable to talk of America as the supplicant. That misreads the strategic balance. Washington can bring China to its knees at any time by shutting markets. There is no symmetry here. Any move by Beijing to liquidate its holdings of US Treasuries could be neutralized — in extremis — by capital controls. Well-armed sovereign states can do whatever they want.

If provoked, the US has the economic depth to retreat into near autarky (with NAFTA) and retool its industries behind tariff walls — as Britain did in the 1930s under Imperial Preference. In such circumstances, China would collapse. Mao statues would be toppled by street riots.

The editors of the New York Times are also correct in reminding us that China’s trade policies aren’t the only issue we need to discuss with them:

Ever since Richard Nixon opened the door in 1972, all presidents have faced a balancing act with China. For President Obama, who arrived in China on Sunday, the challenge is even tougher and more urgent. He needs Beijing’s help on a host of hugely important and extremely difficult problems, including stabilizing the global financial system, curbing global warming, prying away North Korea’s nuclear weapons, and ensuring that Iran doesn’t get to build any.

To do that he needs to encourage China to play an even stronger international role — but also curb some of its darker instincts, including its mistreatment of its own citizens, its less than savory relationships with countries like Sudan and its tendency to bully its neighbors.

If you need an illustration of the urgency of encouraging China’s leaders to take environmental considerations more seriously, this photo essay on pollution in China should be enough a chamber of horrors to convince you. I don’t believe this is something we can be satisfied with leaving to China as a purely internal matter for several reasons. First, Americans and Europeans have been complicit in China’s environmental degradation by exporting our heavy industry to China; many of those polluting companies in China have American and European parents. Second, Chinese air pollution crosses the Pacific to pollute our air and our water, too. Further, as long as China maintains its present course there are no steps we can take which will reduce our carbon production enough to avoid serious effects. That is not to say we should not use resources more efficiently: we should. However, no plan which doesn’t include China is worth a damn. 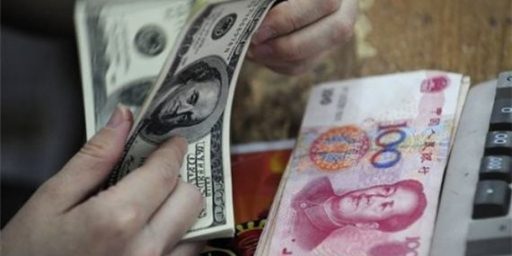 Why the Yuan Won’t Become a Reserve Currency 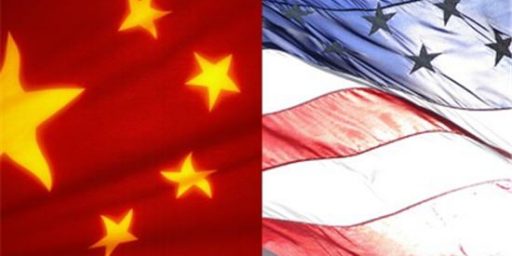