Political Conventions In The Era Of The National Security State

Security at the Republican Convention in Tampa looks more like a war zone than a political convention in a democratic republic. 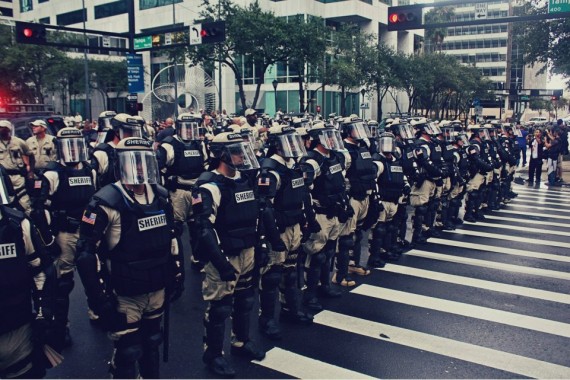 Conor Friedersdorf is down in Tampa for the Republican National Convention, and finds himself just a little bit alarmed at the massive security on display:

Deep inside the Tampa Bay Times Forum, the impenetrable fortress where this year’s Republican National Convention is being held, my colleagues and various GOP delegates assure me that the venue security I experienced is typical for events of this kind — that it’s been this way ever since 9/11. “This must be your first convention,” they say. It is. As a newbie, it feels like an Orwellian police state, albeit one where the men in military fatigues carrying assault weapons are exceptionally polite. Convention veterans are inured to the layers of security checkpoints, the metal detectors, the bomb sniffing dogs, the concrete barricades, the chain link fences, and the virtual absence of protesters. I’ll likely feel that way too after a few more days flashing my official credential, emblazoned with a holographic elephant raising its trunk in triumph. It’s the new normal.

For now, however, I still find it striking that a community organizer turned president and a Republican Party constantly talking up limited government have collaborated to police and host a civic event literally held beneath multiple hovering police helicopters. Delegates and journalists are welcome, but citizen protesters are so far removed in their permanent camp that they might as well be in another city, save brief forays that bring them momentarily to the far periphery of the secure zone. They have the right to peaceably assemble… over there.

In past years I’ve always watched the political conventions on television. The atmosphere on the convention floor invariably appears to be festive, with delegates resplendent in red, white, and blue, a series of speeches by familiar figures extolling American values, and broadcast media invested in the notion that their job is to humanize the nominee. Sunday night, I watched from my hotel room as CNN broadcast its deep dive on Mitt Romney. The piece had all the trappings of even-handedness. Neither compliments nor criticisms were broadcast without some balancing statement. The unstated bias was toward narrative biography, as if looking deep into the candidate’s past would reveal the true character of the man behind the HD image machine.

What feels different, experiencing the RNC here at the actual venue, is the inescapable, visceral awareness of the sprawling establishment that surrounds the nominee and his running-mate.

Conor goes on to describe the sometime byzantine security rules in place in the area immediately adjacent to the site of the convention, as well as the sometimes bizarre restrictions placed on anyone wanting to go inside the building (no umbrellas, despite yesterdays rain, and, for some reason, no bananas). In a subsequent posts, he points out that the security perimeter in place meant that, yesterday, people were forced to walk for long distances in the open despite the fact that there was a Tornado Warning in effect for the area for at least an hour yesterday. PJ Media’s Roger Kimball is also down in Tampa and is similarly frustrated with the situation:

What I am talking about is the preposterous level of security that greets the visitor to the convention, even the credentialed press visitor, whose grumbling ranks I am helping to swell. Many streets in downtown Tampa are closed. The event is taking place not in one but in two separate buildings, a convention center and the Forum. I’d guess they are about a quarter of a mile from each other. The entire area surrounding the buildings is cordoned off with a maze of high fences and security check points and patrolling guards from, I’m told, 60 separate law-enforcement agencies. I’ve seen scores of Secret Service agents, FBI agents, state troopers, military soldiers, local policemen, and TSA agents. They’re on foot, on bicycles, on horse back, aboard golf carts, in SUVs, and God-knows what else. It took my party about 40 minutes to get into the Forum for a media gathering last night, not because there were long lines — those will come later — but because we had to park about three quarters of a mile from the building and then walk through a warren of security checks. One friend told me he’d been through 5 separate checks before he was let in and handed a lukewarm Coors Light. “Never seen anything like it,” said this veteran of several national political conventions.

So the question is, Why? Why is the RNC doing this? Or, more to the point, is it the RNC that is doing this? There was a rumor abroad that the stepped-up security (it reminded one ex-military observer of Bagdhad) was not the RNC’s doing but the federal government’s. Anarchists, you see, had threatened to disrupt the proceedings, so someone declared the event a national security emergency and clamped down hard.

What sort of threat do the anarchists actually pose? you might ask. I asked, and haven’t gotten much of a reply. I’ve been looking around for anarchists but have so far failed to turn up even one. Maybe anarchists, like the wicked witch in The Wizard of Oz, are deathly allergic to water. Some paranoid, conspiracy-minded folk have put it about that the onerous, spirit-dampening security was foisted upon the event by scheming Obamanites deliberately to taint the party spirit. I do not necessarily endorse this low thinking, I merely acknowledge that the idea has been floated and talked about. And I note further that, as the poet Delmore Schwartz once observed, even paranoids have enemies.

The security arrangements at the convention are over the top, onerous, and almost comic in their look-at-me,-I’m-wearing-SWAT-gear swagger. But maybe the most disconcerting aspect of the affair is the two-tier, us-and-them, plebs-and-elites aroma that suffuses the event. Almost everyone is herded, cattle-like, through the security maze. Anyone who is let into the fenced-in enclosure has a bouquet of badges hung around his neck. But some few have badges that bear the legend “perimeter access,” and they get special treatment. A tiny elite is ostentatiously whisked through on golf carts or in limos, just as they are in various Latin American or Soviet-era despotisms. It’s the ostentation of the disparity that rankles.

And yesterday, New York Times columnist Ross Douthat made this observation on Twitter:

Not sure when a republic crosses line into empire, but the militarization of security at party conventions is probably a leading indicator.

None of this is new, of course. There has always been security of some kind at political conventions in the modern era, especially if it’s a convention that the President of the United States is attending. While that isn’t the case with the Republican Convention, it’s worth noting that both Mitt Romney and Paul Ryan are now Secret Service protectees and several of the people attending and speaking at the convention are Governors with their own security contingents. So, you’ve got security on top of security in many cases. Additionally, ever since the September 11th attacks, security at all major events, political or not, has been turned up several notches. This isn’t even the first time that people have complained about convention security. When the Republicans held their 2004 Convention in New York City, the NYPD clashed several times with anti-war protesters who bristled at the restrictions that were being placed upon their ability to demonstrate by establishing things such as the absurd “Free Speech Zones,” outside of which no, well, free speech was going to be allowed.

It’s all very distressing, but sadly it’s also entirely expected. This is the world we live in today. Indeed, I would imagine that security in Charlotte will be even heavier than what Tampa is doing if only because the President and Vice-President will be present there for at least part of next week, not to mention the presence of former President Clinton, several Members of Congress and the Senate, and several Governors. Add into that the fact that Charlotte has apparently still been the site of Occupy protests in recent months, and the fact that the final night of the convention will take place in an open air stadium, and one can easily see Charlotte being an armed camp next week.

Is all this really necessary? Probably not, much as much of the absurdity the TSA forces us to put up with probably isn’t necessary. Much of it is security theater, there as much for show as for any real need. At the same time, though, I don’t see security at these kinds of mass events being toned own anytime soon.