Not surprisingly, Time's editors chose Pope Francis as Person Of The Year. However, Edward Snowden arguably would have been the better choice. 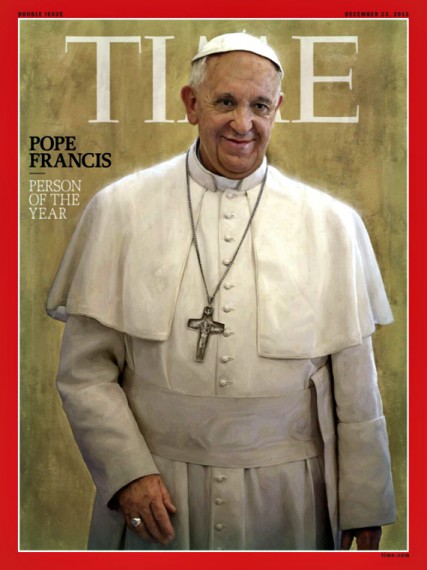 In an annual tradition that has become less and less relevant or interesting as the years go on Time Magazine named Pope Francis its Person Of The Year in a high profile announcement on NBC’s Today show:

The iconic red border of Time magazine will frame Pope Francis as its 2013 Person of the Year, the magazine announced Wednesday morning. By the judgment of Time’s editorial staff, the pope-elected earlier this year after a surprise resignation by predecessor Pope Benedict-was the most influential global newsmaker of the past 12 months. Earlier this week, Time narrowed the finalists down to 10, then five. Pope Francis ultimately won out over NSA leaker Edward Snowden, Syrian president Bashar Assad, Texas senator Ted Cruz and gay rights activist Edith Windsor.

“[W]hat makes this Pope so important is the speed with which he has captured the imaginations of millions who had given up on hoping for the church at all,” Howard Chua-Eoan and Elizabeth Dias write in the cover story. “In a matter of months, Francis has elevated the healing mission of the church.”

The magazine first released such a cover in 1927 under the name “Man of the Year,” and conferred the title on Charles Lindbergh for his solo trans-Atlantic flight. Since then, the annual covers have featured global peacemakers, U.S. presidents, tech billionaires, dictators and more amorphous concepts, like “the protestor” and “the endangered earth.” The editors’ intention is not to praise the figures selected, but to acknowledge their influence in shaping the news and history of the outgoing year. (Hence why Adolph Hitler made the cover in 1938.)

Pope Francis, of course, has made lots of news in 2013. After Pope Benedict announced his resignation in February-the first to do so in 600 years-the Catholic Church elected Cardinal Jorge Mario Bergoglio of Argentina, ending the long line of European popes. Since then, Pope Francis has shaped the global conversation on religion by showing an openness to homosexuality and women’s leadership within the church, as well as by placing an emphasis on reforming the Vatican’s finances while addressing inequality and poverty around the world.

Going into today’s announcement, it was clear that the Pope was in the running to be the person awarded the distinction, and one can certainly find good reason for his selection I suppose. For a man who was the relatively unknown Archbishop of Buenos Aires just a year ago, Jorge Mario Bergoglio has quickly made a name for himself worldwide for his simpler was in the nine months since he as selected as the leader of the world’s one billion Catholics, although it remains unclear just how big an impact he will have on the Church, and the world, going forward. At the very least, though, he has set a new tone for the Church and, in a relatively short period of time, helped to revive the public face of the Papacy in a far more positive direction than his predecessor, who had to deal with the perhaps insurmountable problem of having to fill the shoes of a man who has will soon be canonized a a Saint, managed to do in the eight years that he was the Pope.

Quite honestly, it’s been a long time since I’ve really given much weight to the whole Time “Person Of The Year” phenomenon. To a large degree, it has become little more than a way for the magazine to draw attention to itself in a media market where weekly news magazines have become increasingly irrelevant, and, quite often, its been the occasion for the editors to engage in what can only be described as stunts such as naming “You” for the distinction in 2006, or those occasions on which an inanimate object such as “the Computer” or “Earth” received the distinction. That, combined with the declining relevance of news weeklies generally made the annual hype over who would be the “Person Of The Year” seem less and less relevant as time went on.

Nonetheless, in the days approaching today’s announcement, I speculated that the distinction would go to former NSA contractor Edward Snowden. After all, if you go by what Time claims the criteria for “Person Of The Year actually are, then its hard to think of anyone else who the fits. As it has been described, the distinction is meant to profile a person, group, idea or object that “for better or for worse, …has done the most to influence the events of the year.” Who has done that more than Snowden? Domestically his actions have set of a debate on privacy, 4th Amendment rights, the limits that should be placed on government surveillance, and the policies that have been enacted as part of the War On Terror. They have also set off a debate on the proper role of journalists and, indeed, who is and isn’t a journalist. Internationally, it has had an undeniable impact on relationships between the United States and many nations around the world, including some of our closest allies. With all due respect to Pope Francis, it is still very early in his Papacy and it remains unclear what impact he will have on the world. Indeed, it’s worth noting that Pope John Paul II wasn’t named Person Of The Year until 1994, some 16 years after he had been elevated to the Papacy, and John XXIII was not put on Time’s cover as Person Of The Year until some four years after he became Pope. As it turned out, Snowden ended up coming in second place in the judgment of Time’s editors.

Indeed, Time’s decision not to select Snowden is already being criticized in some circles:

In the days leading up to Time’s unveiling of its decision, writers at rival publications began publicly lobbying for Snowden to be chosen. “No Contest: Edward Snowden Is Person Of The Year,” the New Yorker’s John Cassidy wrote:

In opening the eyes of people around the world to how easy it is for governments to monitor digital communications, and to how complicit major technology companies have been in these surveillance programs, he sparked a long-overdue debate about how to preserve privacy in the information age—and whether such a thing is even possible. If Snowden hadn’t come forward, the steady encroachment of the surveillance state would have continued, and most people would have been none the wiser. Now Big Brother and his enablers have been rattled, and have been forced to be a bit more open.

As noted, I tend to agree with this assessment. In the end, though, I’m not sure it matters. Time Magazine is hardly the bellwether publication it once was and, outside of the publicity this announcement gets each December, it hardly seems to be a big player in the media world anymore.