Did a deal between the U.S. and Pakistan during the infancy of the war against al Qaeda play a role in the raid against Osama bin Laden? 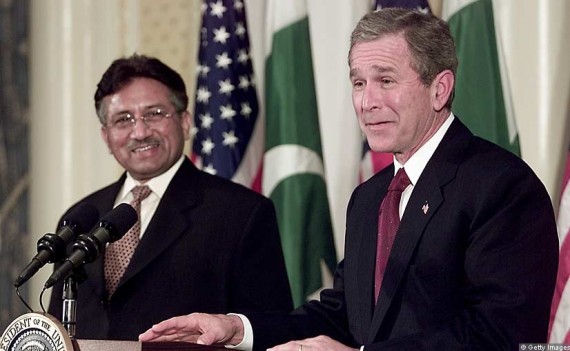 According to The Guardian, a secret agreement between the United States and Pakistan going back to the early days of the war in Afghanistan authorized the raid that took out Osama bin Laden:

The US and Pakistan struck a secret deal almost a decade ago permitting a US operation against Osama bin Laden on Pakistani soil similar to last week’s raid that killed the al-Qaida leader, the Guardian has learned.

The deal was struck between the military leader General Pervez Musharraf and President George Bush after Bin Laden escaped US forces in the mountains of Tora Bora in late 2001, according to serving and retired Pakistani and US officials.

Under its terms, Pakistan would allow US forces to conduct a unilateral raid inside Pakistan in search of Bin Laden, his deputy, Ayman al-Zawahiri, and the al-Qaida No3. Afterwards, both sides agreed, Pakistan would vociferously protest the incursion.

“There was an agreement between Bush and Musharraf that if we knew where Osama was, we were going to come and get him,” said a former senior US official with knowledge of counterterrorism operations. “The Pakistanis would put up a hue and cry, but they wouldn’t stop us.”

The deal puts a new complexion on the political storm triggered by Bin Laden’s death in Abbottabad, 35 miles north of Islamabad, where a team of US navy Seals assaulted his safe house in the early hours of 2 May.

Pakistani officials have insisted they knew nothing of the raid, with military and civilian leaders issuing a strong rebuke to the US. If the US conducts another such assault, Prime Minister Yousaf Raza Gilani warned parliament on Monday, “Pakistan reserves the right to retaliate with full force.”

Days earlier, Musharraf, now running an opposition party from exile in London, emerged as one of the most vocal critics of the raid, terming it a “violation of the sovereignty of Pakistan”.

But under the terms of the secret deal, while Pakistanis may not have been informed of the assault, they had agreed to it in principle.

I suppose it makes sense on some level. Ever since the escape from Tora Bora, it was widely believed that Bin Laden was hiding out somewhere in the mountainous region between Pakistan and Afghanistan. An agreement like this would allow the U.S., should it learn that Bin Laden was just a few miles across the border, to send in special forces to grab him without Pakistan having to accept the burden of responsibility for authorizing the action. Of course, as it turned out OBL wasn’t in a cave in Waziristan, but in a compound in Abbottabad only a mile or so away from one of Pakistan’s elite military academies. Not exactly the type raid either side anticipated in 2001, I’m sure

If this is true, of course, it puts an entirely new light on the rhetoric coming out of the Pakistani government, which I noted in an earlier post. Of course, it’s entirely possible that reports of this agreement are less than meets the eye. It seems unlikely that either side anticipated that we’d be flying into a city 30 minutes from Islamabad and snatching Bin Laden out of a compound in the middle of a residential area. So, either the current Pakistani response is a smokescreen for the agreement, or the agreement is a smokescreen designed to downplay the Pakistani reaction to the raid and questions regarding complicity in keeping bin Laden’s location secret. You pick which one it is, I guess.

Finally, as Allahpundit notes, there’s the question of what a “deal” with Pakistan really means:

The problem here, as always, is that the phrase “Pakistani government” is essentially meaningless. Almost no one, possibly including the White House, knows for sure how far up the state’s complicity with terrorist outfits like AQ and Lashkar e-Taiba goes. Presumably not all the way up — Pakistan has, in fact, lost thousands of troops to battles with jihadists, including in Waziristan — but it must go awfully high for Osama to spend five years living just a thousand yards from the national military academy with apparently little fear of being caught. Stephen Hayes and Tom Joscelyn speculate that the CIA might have been monitoring conversations between top Pakistani officials in real time while the Bin Laden raid played out to try to get a sense of who knew what. If they’re right, that might end up being the biggest intelligence windfall of the operation, notwithstanding that trove of computer data the SEALs grabbed from the compound.

To say the least. Whatever the truth of this story is, just file it for the moment as another data point in the puzzle inside an enigma inside a riddle that is Pakistan.