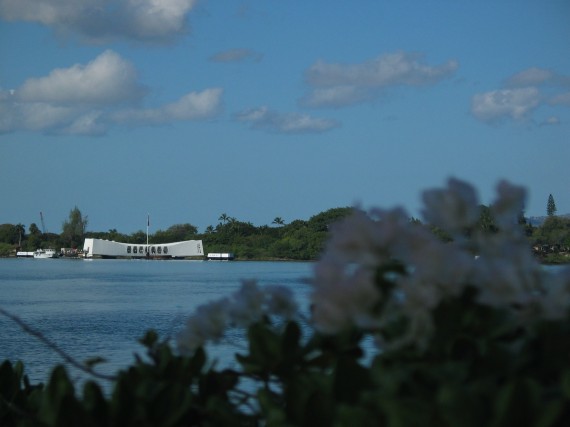 There’s an interesting story in today’s Washington Post from Elizabeth McIntosh, now an elderly woman but in 1941 a reporter for the Honolulu Star-Bulletin who wrote a story about the Pearl Harbor attack that her editors believed was too graphic to be published. That story is published in the the Post for the first time:

For seven ghastly, confused days, we have been at war. To the women of Hawaii, it has meant a total disruption of home life, a sudden acclimation to blackout nights, terrifying rumors, fear of the unknown as planes drone overhead and lorries shriek through the streets.

The seven days may stretch to seven years, and the women of Hawaii will have to accept a new routine of living. It is time, now, after the initial confusion and terror have subsided, to sum up the events of the past week, to make plans for the future.

It would be well, perhaps, to review the events of the past seven days and not minimize the horror, to better prepare for what may come again.

I have a story to tell, as a reporter, that I think the women of Hawaii should hear. I tell it because I think it may help other women in the struggle, so they will not take the past events lightly.

I reported for work immediately on Sunday morning when the first news — Oahu is being attacked — crackled over the radio, sandwiched in a church program.

Like the rest of Hawaii, I refused to believe it. All along the sunny road to town were people just coming out of church, dogs lazy in the driveways, mynas in noisy convention.

Then, from the neighborhood called Punchbowl, I saw a formation of black planes diving straight into the ocean off Pearl Harbor. The blue sky was punctured with anti-aircraft smoke puffs. Suddenly, there was a sharp whistling sound, almost over my shoulder, and below, down on School Street. I saw a rooftop fly into the air like a pasteboard movie set.

For the first time, I felt that numb terror that all of London has known for months. It is the terror of not being able to do anything but fall on your stomach and hope the bomb won’t land on you. It’s the helplessness and terror of sudden visions of a ripping sensation in your back, shrapnel coursing through your chest, total blackness, maybe death.

The vision of death became reality when I was assigned to cover the emergency room of the hospital.

The first victims of the Japanese-American war were brought there on that bright Sunday morning.

Bombs were still dropping over the city as ambulances screamed off into the heart of the destruction. The drivers were blood-sodden when they returned, with stories of streets ripped up, houses burned, twisted shrapnel and charred bodies of children.

In the morgue, the bodies were laid on slabs in the grotesque positions in which they had died. Fear contorted their faces. Their clothes were blue-black from incendiary bombs. One little girl in a red sweater, barefoot, still clutched a piece of jump-rope in her hand.

Firefighters from the Hickam Air Force Base carried the victims in. The men had a red T marked on their foreheads, mute testimony of the efficiency of first-aiders in giving tetanus shots to ward off lockjaw. The body of a man with a monogrammed shirt, H.A.D., was marked DOA (dead on arrival), trundled off to make room for victims who were still breathing.

There was blood and the fear of death — and death itself — in the emergency room as doctors calmly continued to treat the victims of this new war. Interns were taping up windows to prevent them from crashing into the emergency area as bombs fell and the dead and wounded continued to arrive. I had never known that blood could be so bright red.

There’s much more at the link, and also this video interview with McIntosh, who went on to become an officer in the Office of Strategic Services and, later, the Central Intelligence Agency.

It’s always interesting to find these little tidbits of history, and I’m glad to see that Betty McIntosh is still around to tell her story and get the story of the “Day Of Infamy” from her point of view published after seven decades. At the same time, I have to wonder, was it appropriate for McIntosh’s editors to spike her story 71 years ago? We live in a different world now, of course, but I have a hard time finding an acceptable way to say that it was.