NATO is alleging today that at least 1,000 Russian combat troops are now operating inside Ukrainian territory:

WASHINGTON — NATO released photographs on Thursday that it said shows Russian artillery units operating in Ukraine, and asserted that more than 1,000 Russian soldiers had now joined the separatists fighting there against the Ukrainian armed forces.

“Over the past two weeks we have noted a significant escalation in both the level and sophistication of Russia’s military interference in Ukraine,” said Brig. Gen. Nico Tak of the Netherlands, a senior officer in NATO’s military command.

General Tak told reporters that “well over” 1,000 Russian soldiers were now operating in Ukraine and that the Russian military was actively involved in the fighting

A Ukrainian separatist commander asserted on Thursday that Russian soldiers inside Ukraine were merely volunteers who had joined the rebels while on leave. NATO said the photographs show organized Russian military units, equipped with artillery and other heavy equipment.

The photos were taken by DigitalGlobe, a commercial firm, and have not been altered, NATO said in a statement. Two of the photos were described in an article Wednesday in The New York Times, before they were publicly released.

This is the first time that NATO has made public photographic evidence to corroborate its assertions that Russian military units have been firing artillery from inside Ukraine.

One photograph, dated Aug. 21, shows a Russian military convoy with self-propelled artillery moving in the Krasnodon area inside Ukraine.

“This configuration is exactly how trained military professions would arrange their assets on the ground, indicating that these are not unskilled amateurs, but Russian soldiers,” NATO said in a captioned description of the photograph. “Russian artillery systems like these have recently shelled Ukrainian positions outside the city of Luhansk in conjunction with a separatist counteroffensive to attempt to break the Ukrainian siege of the city.”

A third photo shows the Russian military buildup, including tanks and armored personnel carriers, near the Russian city of Rostov. NATO said there were multiple Russian military camps in the area and that some Russian forces were based within a few miles of Ukraine and could attack with little warning.

Russia is also supplying the separatists with arms from such locations, NATO said.

Here’s one  of the photographs, dated August 23rd with annotations by NATO analysts: 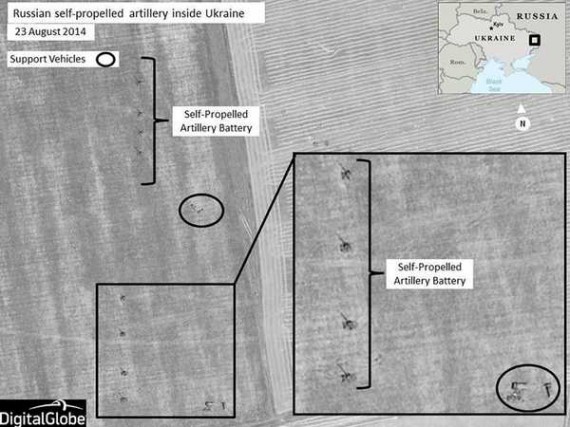 The Ukrainians themselves are saying that Russian tanks have also entered the country:

NOVOAZOVSK, Ukraine — Two columns of Russian tanks and military vehicles fired Grad missiles from Russia at a border post in southeastern Ukraine, then rolled into the country Thursday as its overmatched border guards fled, a top Ukrainian official said.

The comments by Col. Andriy Lysenko, a spokesman for Ukraine’s National Security Council, and other statements from NATO, the pro-Russian separatists in Ukraine and the United States left no doubt that the Russian military had invaded southeastern Ukraine.

A top NATO official said at least 1,000 Russian troops have poured into Ukraine with sophisticated equipment and have been in direct “contact” with Ukrainian soldiers, resulting in casualties.

President Petro Poroshenko summoned the council as the strategic southeastern town of Novoazovsk appeared firmly under the control of separatists and their Russian backers, a new front in the war in eastern Ukraine between the separatists and Poroshenko’s government in Kiev.

“Today the president’s place is in Kiev,” Poroshenko said.

Russian stock markets dived as fears grew that the country was escalating its role in the conflict, a move that could provoke the U.S. and European Union to impose further sanctions on Russian businesses and individuals. Russia’s MICEX index dropped nearly 2 percent on Thursday, and major Russian state banks VTB and Sberbank dropped more than 4 percent.

Brig. Gen. Nico Tak told reporters at NATO headquarters that the ultimate aim of Russia was to stave off defeat for the separatists and turn eastern Ukraine into a “frozen conflict” that would destabilize the country “indefinitely.”

NATO estimated that another 20,000 Russian troops were right over the Russian border.

Tak said the 1,000 Russian troops operating inside Ukraine was a conservative estimate and provided satellite imaginary showing an incursion of great sophistication. He refused to specify exactly what the “contact” with Ukrainian troops was.

Lysenko said the missiles from Russia were fired about 11 a.m. and about an hour and a half later, two columns, including tanks and other fighting vehicles began an attack. They entered Ukraine from Veselo-Voznesenka and Maximovo of the Rostov region in Russia.

The leader of the insurgency, Alexander Zakharchenko, said in an interview on Russian state television that 3,000 to 4,000 Russians have fought on the separatist side since the armed conflict began in April.

“These incursions indicate a Russian-directed counteroffensive is likely underway in Donetsk and Luhansk,” U.S. State Department spokeswoman Jen Psaki said Wednesday. She voiced concern about overnight deliveries of materiel in southeast Ukraine near Novoazovsk and said Russia was being dishonest about its actions, even to its own people.

The presence of Russian troops in Ukraine has, of course, been something of an open secret for some time now. There have been intelligence officers and special forces on the ground there at various points in time ever since the crisis in eastern Ukraine began. For the most part, though, they have lived in the shadows and seem to have been playing more an advisory and logistical role. There have also been reports about Russian units “mistakenly” crossing the border, a phenomenon which led to this amusing tweet from the Canada’s NATO Delegation. However, if these reports are true than it would appear that Russia has decided to significantly ramp up its involvement in the rebellion in eastern Ukraine and, essentially, become a combatant along side the pro-Russian separatists against the Ukrainian military. That, quite obviously, is a significant escalation and one that would seem guaranteed to thrust this story back on to the front pages of newspapers around the world.

Inevitably, of course, the question will become how the West will respond to this latest move. There is already talk of increased sanctions, but given the fact that we’ve already seen the Vladimir Putin doesn’t seem to be all that deterred by economic sanctions against his country, so it’s unclear exactly what we can do that would deter him from that course. In any event, expect to hear more about this in the days to come as the world’s attention once again shifts from the Middle East back to Eastern Europe.