The Ukraine crisis, which never really went away, is back,

NATO is reporting that Russian troops and armored columns have crossed back over the border into Ukraine in an apparent effort to aid pro-Russian separatists around Donetsk and other areas of eastern Ukraine:

KIEV, Ukraine — Tanks and other military vehicles towing heavy weapons pouring over the border from Russia into eastern Ukraine. Nightly artillery battles in the region’s biggest city, Donetsk, and reports of fighting around another regional capital.

And now, sightings of the “green men,” professional soldiers in green uniforms without insignia, the same type of forces that carried out the invasion of Crimea in the spring.

A senior NATO official confirmed on Wednesday what Ukrainian military officials and monitors from the Organization for Security and Cooperation in Europe have been saying for days now: Russian troops and military equipment are crossing the border into Ukraine, seemingly preparing for renewed military action, though what exactly remains unclear.

The assertion drew stern and dismissive denials from Moscow, which for months has denied any military intervention in eastern Ukraine, though it has acknowledged publicly that Russian “volunteers” have crossed into Ukraine to support the separatists.

n light of the recent developments, Western officials finally seemed ready to acknowledge that a cease-fire agreement signed in September had fallen apart, and that the threat to peace in Europe had returned in a possibly more virulent form.

The official, Gen. Philip Breedlove, the Supreme Allied Commander Europeof NATO said that it “is concerned about convoys of trucks taking artillery and supplies into east Ukraine from Russia.” He said there were increased numbers of Russian forces in east Ukraine, training militants including in the use of sophisticated weaponry.

“Across the last two days we have seen the same thing that O.S.C.E. is reporting,” General Breedlove said at a news conference in Sofia, Bulgaria. “We have seen columns of Russian equipment, primarily Russian tanks, Russian artillery, Russian air defense systems and Russian combat troops entering into Ukraine.”

The full scope of the Russian incursion was not clear, he said.

“We do not have a good picture at this time of how many,” he said. “We agree that there are multiple columns that we have seen; we agree with the OSCE reports. And as to their intent: I’m not sure.” He added, “It is our first guess that these forces will go in to make this a more contiguous, more whole and capable pocket of land in order to then hold onto it long-term.”

Russia forcefully denied that any of its troops or equipment had crossed into eastern Ukraine, and a government spokesman dismissed General Breedlove as unreliable and “alarmist.”

“We have stressed repeatedly that there have never been and there are no facts behind the regular blasts of hot air from Brussels regarding the supposed presence of Russian armed forces in Ukraine,” the spokesman, Maj. Gen. Igor Konashenkov told Russian news agencies on Wednesday. “We have stopped paying attention to NATO Supreme Allied Commander Europe Gen. Philip Breedlove’s unfounded statements alleging that he observed Russian military convoys invading Ukraine.”

Sporadic fighting has continued from virtually the moment that the truce agreement was signed on Sept. 5 in Belarus, Minsk by Ukraine and Russia, as well as by representatives of separatist groups in eastern Ukraine and the Organization for Security and Cooperation in Europe, which helped broker the deal. Ukrainian officials have complained all along that Russia was taking advantage of the so-called truce to reinforce the rebels in eastern Ukraine with more fighters and equipment.

For weeks, however, officials on all sides had insisted that the cease-fire was holding as if force of will alone could perhaps make it so.

The weeks of reluctance to acknowledge the fighting underscored the intractability of the conflict and the extraordinary difficulties that have been faced by policy makers looking for a way out of the conflict.

For the government of President Petro O. Poroshenko of Ukraine, acknowledging the failure of the cease-fire would have meant conceding his inability to exert control in the war zone. For Russia, it would have meant raising the likelihood of additional economic sanctions by Europe and the United States. And for Western officials it would have meant pressure to impose additional sanctions, which are highly unpopular among business interests in their own countries.

The cease-fire agreement signed in Minsk had called for monitoring the Russia-Ukraine border by the O.S.C.E. and and had specifically required the removal of “unlawful military formations, military hardware, as well as militants and mercenaries from the territory of Ukraine.”

Whether Kiev, the OSCE, or NATO wanted to recognize it, though, it seems apparent now that the cease fire that was negotiated two months ago was never quite secure to begin with, which perhaps wasn’t surprising considering that it was largely dependent upon the ability of Russia to control the separatists to begin with not to mention the willingness of Vladmir Putin to abide by its terms regardless of what might be in his interests. As to the first, there have always been hints that the separatists have never been completely under Russian control even though Russia obviously has a huge degree of influence over them. The downing of Malaysian Air Flight 17, for example, clearly seems from a distance to be an instance of the rebels using equipment that had been provided to them by the Russians, quite irresponsibly of course, which they then ended up using without really knowing what they were doing. Also, the general course of the war in the east has been conducted in a manner that indicates that the separatists would not be easy for Moscow to manage even if it desired to. And, of course, that begs the question of just how much Putin wanted to abide by the terms of the cease fire to begin with. To a large degree, even reaching the agreement was likely something he saw as mere window dressing that would allow him to proceed with whatever his plans for the eastern Ukraine actually are while keeping Kiev, and the West, off balance wondering exactly what it is that he’s thinking. Indeed, one can say that this has been the motivation behind everything that has been coming out of Russia since the Winter Olympics ended and the aggression against Ukraine began.

What’s interesting about all of this is the context that its occurring in. While Russian troops are on the move, Putin himself is in China for the APEC Summit where he and President Obama apparently did have some brief discussions about issues between their two countries, including Ukraine, and he will be at the G-20 Summit in Bristaine at the end of the week where, undoubtedly, this news, along with the entirety of the events of the past year will be a prominent issue. There’s no small degree of audacity at work there at the very least, and one wonders what President Obama, the leaders of the European Union and European Commission, Prime Minister David Cameron, will react to a new round of aggression from Russian forces and pro-Russian separatists. Suffice it to say, though, that it looks like Ukraine will be back in the headlines, which I guess is okay since the American media has gone back to ignoring issues like Ebola and the elections are over with. 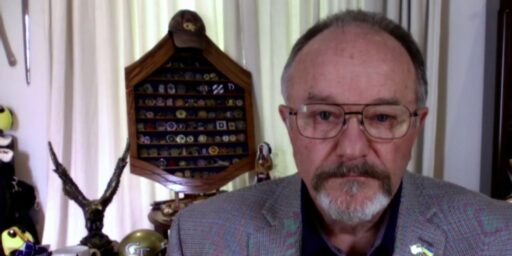