My evidence? Bill Kristol thinks he has a chance. 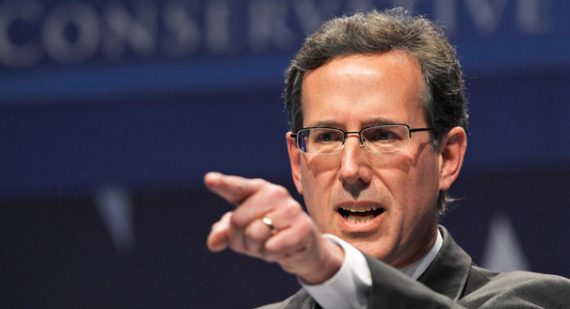 On the night of the Iowa caucuses, Bill Kristol made a comment during the FNC coverage that Santorum would be “difficult to take down” which led me to sarcastically tweet that this meant that Santorum was doomed.

Now Kristol has expanded this position to a Weekly Standard column in which he makes a claim and a request.  The claim is that non-establishment candidates have won before and the request is that the voters “give Rick a chance.”

First, I am honestly not sure when Bill Kristol was right about a major political trend or issue.  Quite some time ago I reached the point where I could not even take him seriously as an ideologically-driven pundit (i.e, someone who might be able to provide real analysis, but simply with a clear point-of-view) to nothing more than a hack who was sufficiently ensconced in his position that is going to be heard, but really has nothing to say.  Not only is he a legacy pundit (his dad was Irving Kristol) but at this point he has both his FNC gig and his magazine as a platform which he is unlikely to lose.*

Third, Kristol’s assertions about Santorum’s chances are built on wisps of nothing:

Actually, Santorum can hope to win. He has been running to win. And after what he pulled off in Iowa, it’s foolish to suggest he doesn’t have a chance to win. His Iowa performance, and his speech Tuesday night, were impressive enough to suggest to primary voters in subsequent states that they should make an effort to judge both his capacity to win and his capacity to govern.

I will concede that Santorum can “hope to win” and that he has “a chance” but I would also say that any candidate still in the race can hope and has a chance as long as they remain active candidates.  Of course, hope costs nothing and all competitors hope, else they would not bother competing.  The issue of chances is not whether a chance exists, but what the probabilities are.   There is a chance, for example, that Mitt Romney could be hit by a bus or that some heretofore unknown fact about his life will doom him.  Such occurrences would, without a doubt, boost Santorum’s chances.  The real question, however, is: what are Santorum’s chances as the race is currently constructed?  And, further, what evidence does one have that a real competition is possible?  Kristol provides none.  And really: what candidate isn’t “running to win”?

Indeed, the piece is utterly devoid of evidence or an actual argument.  Indeed, the whole thing can be boiled down to two sentences:  Sometimes the establishment candidate isn’t nominated.  Therefore, give Rick a chance.**   Of course, since I once asked if one his columns was the “Laziest Column in a Major Paper Ever?” I am not surprised by this attempt.

*Of course, over time he has lost gigs at ABC, Time, and the New York Times.  No doubt some will charge “liberal MSM bias” but the truth of the matter is, his work is unimpressive.  The NYT example in particular is telling, because they clearly wanted an additional conservative columnist.

**And yes, the whole column is an attempt to build off of the song lyric “All we are saying is give peace a chance.”  Of course, said Lennon tune failed to stop the Viet Nam war (unless one is giving it a serious time-lag discount) and it certainly didn’t result in global peace.  As such, perhaps Kristol’s deployment is apt as Santorum is not getting the nomination.