He hasn't declared yet, but Scott Walker is running for President, and he's pandering to the most extreme wing of the Republican Party. 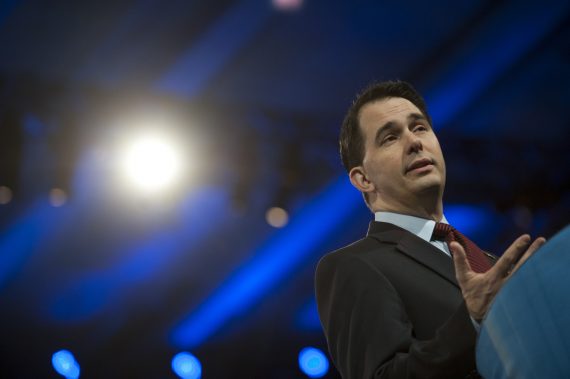 In an appearance on ABC News’s This Week, Wisconsin Governor Scott Walker, who is likely to enter the race for the Republican Presidential nomination within the next month, endorsed a Constitutional Amendment that would ban same-sex marriage nationwide:

The Supreme Court is expected to issue a decision this month that could grant, for once and for all, same-sex couples the right to wed across the country.

“I personally believe that marriage is between one man and one woman,” said Walker, a prospective GOP presidential candidate, on ABC’s “This Week.” “If the court decides that, the only next approach is for those who are supporters of marriage being defined as between one man and one woman is ultimately to consider pursuing a constitutional amendment.”

He added that “the decision on defining marriage should be left up to the states.”

Same-sex marriage is legal in Wisconsin. Walker has said that he voted for the state’s constitutional ban on marriage equality in 2006, which was overturned eight years later by the courts.

KARL: If the Supreme Court establishes that same sex marriage is a constitutional right, does that effectively end this as a political issue in this campaign?

KARL: So you would favor a constitutional amendment that would say that states are allowed to ban same sex marriage.

WALKER: I believe that the decision on defining marriage should be left up to the states, yeah.

To be completely fair to Walker, it’s unclear from the transcript if he’s talking about a Constitutional Amendment that would ban same-sex marriage nationwide or one that would give states the right to make that decision on their own. Ultimately, though, there really isn’t a functional difference between the two and voters on both sides of the political aisle are going to interpret Walker’s remarks as meaning that he supports a nationwide ban on same-sex marriage regardless of what the Supreme Court might have to say later this month. In reality, of course, a President has no say whatsoever in the ratification of an amendment to the Constitution, the most Walker could do if her were elected would be to publicly endorse an amendment proposed by a Congressman or Senator. Additionally, the likelihood that any such amendment would get the 2/3 vote in the House and Senate, never mind the support of 38 out of the 50 states, is somewhere between slim and none. So basically what Walker is saying here is that he supports something that he has no control over and which has absolutely no chance of ever passing, but the fact that he’s doing it is perhaps the clearest indication yet that he is indeed running for President.

Governor Walker didn’t have to answer the question this way, of course. He could have said that he won’t comment until the Court has ruled. He could have said that, as President, it’s a subject that would be outside of his purview. He could have responded the way he did when the Supreme Court denied Wisconsin’s appeal of the ruling by the Seventh Circuit Court of Appeals when he said that the battle over same-sex marriage was “over in Wisconsin.”  Instead he took a position that is designed to appeal to an increasingly small minority of Americans, and the reason for it is obvious. Walker is running for President and Iowa is pretty much a must-win state for him. In order to win in Iowa in a Republican caucus, you need to appeal to the social conservatives that are most likely to show up at night in the winter for a caucus. Once the Supreme Court does rule, you can expect Walker to react the same way that he did here, as will many of his fellow Republicans, notwithstanding the fact that most Americans say that they would be fine with a Court ruling that struck down same-sex marriage bans nationwide. That will probably help him in the race for the Republican nomination, but if he does win the nomination he’s going to have the same problem with the vast number of voters who don’t consider them social conservatives that Republicans have had in the last two Presidential election cycles.