The court wisely deferred to Congress in setting its own rules.

The U.S. Supreme Court on Monday declined to hear a challenge by Republican lawmakers to pandemic-related proxy voting rules set by Speaker Nancy Pelosi in the Democratic-led House of Representatives that were tailored to limit exposure to COVID-19.

The voting rules, implemented in May 2020, allow members of the 435-seat House to serve as proxies for colleagues in quarantine or otherwise unable to cast floor votes in the chamber. House Republican leader Kevin McCarthy and other lawmakers had asked the Supreme Court to reverse a lower court decision that allowed the remote voting rules to remain in effect.

The resolution passed by the House enabled lawmakers to act as a proxy for up to 10 colleagues at any one time, requiring that they disclose which members they intended to represent. The proxy voting system was embraced early in the pandemic and was intended to be temporary, but has been extended several times. The most recent extension is in effect until Feb. 13.

Republican lawmakers have called the measure a violation of the U.S. Constitution, arguing that only lawmakers actually present within the halls of Congress can cast votes. Republicans also called the resolution a way for Democrats to maintain their slim majority in the House regardless of whether all their members are present on Capitol Hill.

There’s no explanation given in the denial order and reporting elsewhere on this is light to nonexistent. Yet it’s almost certainly the right ruling.

It’s true that the proxy here has been abused. Intended to allow the House to keep running during the scariest part of the COVID pandemic and allow members who were quarantined to continue to be able to vote, it has now become common practice for all manner of occasions.

Last May, seven House Democrats cast votes by proxy when they joined President Joe Biden on a visit to a Ford Motor Co plant in Michigan. The following month, nine House Republicans voted by proxy while visiting the U.S.-Mexican border with former President Donald Trump.

Frankly, I don’t love that.

But the Constitution really says very little about the operation of Congress, clearly granting the House and Senate broad latitude over its own affairs.

Article I, Section 4 specifies that “The Congress shall assemble at least once in every Year, and such Meeting shall be on the first Monday in December, unless they shall by Law appoint a different Day.”

Section 6 is the most detailed:

Each House shall be the Judge of the Elections, Returns and Qualifications of its own Members, and a Majority of each shall constitute a Quorum to do Business; but a smaller Number may adjourn from day to day, and may be authorized to compel the Attendance of absent Members, in such Manner, and under such Penalties as each House may provide.

Each House may determine the Rules of its Proceedings, punish its Members for disorderly Behaviour, and, with the Concurrence of two thirds, expel a Member.

Each House shall keep a Journal of its Proceedings, and from time to time publish the same, excepting such Parts as may in their Judgment require Secrecy; and the Yeas and Nays of the Members of either House on any question shall, at the Desire of one fifth of those Present, be entered on the Journal.

Neither House, during the Session of Congress, shall, without the Consent of the other, adjourn for more than three days, nor to any other Place than that in which the two Houses shall be sitting.

While the Framers likely didn’t intend proxy voting, they certainly didn’t prohibit it. And the courts have, rightly, been loathe to tread on the way either of the other branches of government runs their internal affairs.

FILED UNDER: Congress, Law and the Courts, Supreme Court, U.S. Constitution, US Politics 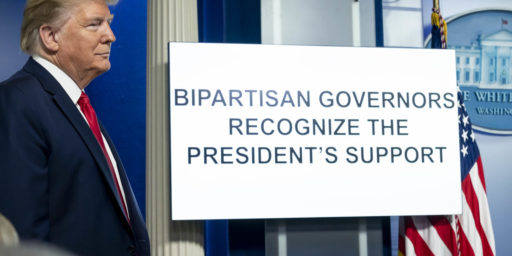 Trump Threatens to Adjourn Congress to Get Appointees In