The Senate has passed an amendment to a military spending bill that would require women to register for the draft. 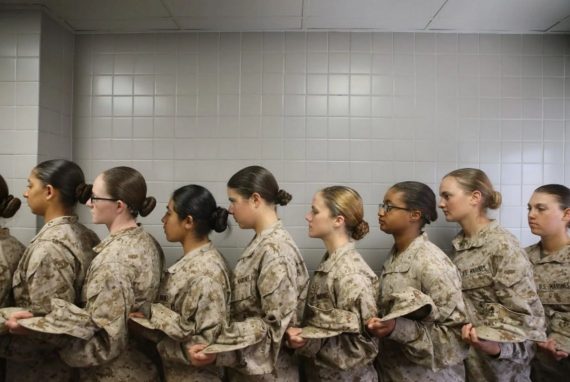 Setting up a potential battle with the House, the Senate has passed a defense appropriations bill that includes a provision requiring women to register with Selective Service just has men have been required to do since the 1980s:

WASHINGTON — In the latest and perhaps decisive battle over the role of women in the military, Congress is embroiled in an increasingly intense debate over whether they should have to register for the draft when they turn 18.

On Tuesday, the Senate approved an expansive military policy bill that would for the first time require young women to register for the draft. The shift, while fiercely opposed by some conservative lawmakers and interest groups, had surprisingly broad support among Republican leaders and women in both parties.

The United States has not used the draft since 1973 during the Vietnam War. But the impact of such a shift, reflecting the evolving role of women in the armed services, would likely be profound.

Under the Senate bill passed on Tuesday, women turning 18 on or after Jan. 1, 2018, would be forced to register for Selective Service, as men must do now. Failure to register could result in the loss of various forms of federal aid, including Pell grants, a penalty that men already face. Because the policy would not apply to women who turned 18 before 2018, it would not affect current aid arrangements.

“The fact is,” said Senator John McCain, Republican of Arizona and the chairman of the Armed Services Committee, “every single leader in this country, both men and women, members of the military leadership, believe that it’s fair since we opened up all aspects of the military to women that they would also be registering for Selective Services.”

The Supreme Court ruled in 1981 that women did not have to register for the draft, noting that they should not face the same requirements as men because they did not participate on the front lines of combat. But since Defense Secretary Ashton B. Carter said in December that the Pentagon would open all combat jobs to women, military officials have told Congress that women should also sign up for the draft.

“It’s my personal view,” Gen. Robert B. Neller, the commandant of the Marine Corps, told the Senate Armed Services Committee in February, that with the complete lifting of the ban on women in combat roles, “every American who’s physically qualified should register for the draft.”

While most Republican senators — including Mitch McConnell of Kentucky, the majority leader, and the women on the Armed Services Committee — agree with the move, it has come under fierce attack from some of Congress’s most conservative members.

“The idea that we should forcibly conscript young girls in combat to my mind makes little sense at all,” Senator Ted Cruz, Republican of Texas and the father of two young daughters, said on the Senate floor last week.

After voting against the bill on Tuesday, Mr. Cruz said in a prepared statement: “I could not in good conscience vote to draft our daughters into the military, sending them off to war and forcing them into combat.”

The debate will now pit the Senate against the House, where the policy change has support but was not included in that chamber’s version of the bill.

In April, Representative Duncan Hunter, Republican of California, offered a provision related to women and the draft for the House version of the defense policy bill to highlight the issue, even though he opposes the idea — then voted against his own amendment. It passed with bipartisan support but was stripped from the final bill in a procedural move.

Conservative groups, which threatened to target senators who voted for the policy bill, reacted with anger on Tuesday to the bill’s passage. “Allowing our daughters to be forced into combat if there is a draft is a clear example of Washington placing more value on liberal social engineering than military objectives and preparedness,” one such group, Heritage Action for America, said in a news release.

But supporters of the policy change say opponents are oversimplifying the issue. “What people don’t seem to understand is just because there is conscription, that does not mean that all women would serve in the infantry,” Senator Deb Fischer, Republican of Nebraska, said. “There are many ways to serve our country in the event of a national emergency.”

As I said when this issue was first being debated in February, the ideal answer to this question is that nobody should be required to register for the draft and that nobody should ever be drafted again based both on the fact that it is an inefficient way to staff the modern military and, in the end, inherently immoral in a free society.

On the first point, it has always been unclear to me why registration of any kind was required to begin with. On the major occasions in the past when the draft was implemented, such as during the Civil War, World War One, World War Two, the Korean War, and Vietnam, there was no registration of any kind until a period just before the draft itself was imposed. In each of those cases, the draft seemed to function relatively fine and the fact that there had not been a registration requirement in place for an extended period of time did not seem to unduly hamper the military. The registration requirement that is in place today, by contrast, has been law since 1980, when it was put in place by Jimmy Carter in response to the Soviet invasion of Afghanistan. At the time, it was seen as a largely symbolic move since there was little chance that the United States was going to get involved in the Afghan War directly, and even less of a chance that what was happening in that country would expand into, say,  war in Europe between NATO and the Warsaw Pact. Thirty-six years later, the U.S. military has engaged in major military conflicts involving large numbers of ground forces in the Arabian Peninsula, Iraq, and Afghanistan, not to mention smaller conflicts in the Balkans, Grenada, Panama, and other locations, all with an all-volunteer military, supplemented as needed by Reserve forces and/or National Guard units. Given that, and the fact that it’s unlikely that we’ll see the kind of conflict for which a draft even needs to be contemplated at any point in the near future, what Congress really ought to be considering is legislation to end the registration requirement rather than expand it. Kentucky Senator Rand Paul has proposed legislation to do just that, but it’s unlikely to go anywhere.

On the second point, the biggest problem with a military draft has always been the fact that it is, in the end, inherently immoral. If a free society stands for anything, it stands for the proposition that individuals are free to choose their own path in life and that, absent conviction for a crime, the state has no right to compel people to provide a service to the state. The great libertarian economist Milton Friedman, who became one of the chief advocates on the right for eliminating the draft in the 1970s, put it perfectly when he said that the draft was inconsistent with a free society.” At it’s base, the draft stands for the proposition that a person’s life belongs not to them but to the state, and that the state is free to send them into the line of fire for whatever reason it chooses whenever it chooses. That’s incompatible with pretty much everything the United States has ever stood for ever since the Declaration of Independence was sent out into the world. It’s been more than forty years since we drafted anyone in this country was drafted and we seem to have done just fine. Indeed, our contemporary military is arguably even more highly trained and equipped than it was at any point when the draft was in effect. It’s time we put an end to a practice that seems all too much like slavery once and for all.

All of that being said, if we aren’t going to eliminate the draft or draft registration then I see no reason why it shouldn’t be expanded to include women. Unlike the last time the draft was in effect, women now perform at nearly all levels in the military from support roles all the way up to flying combat and combat support operations. They can be found in the ranks of the enlisted, and in command roles. And, now, they are starting to prove that they can qualify for combat roles. Given all of that, there’s no rational reason why women should not be required to register for the draft just as men have been since 1980. Even if they don’t end up in combat roles in the event a draft is ever implemented, there are a whole host of other roles they could fulfill and excluding them from what advocates for a draft continually claim to be a civic obligation doesn’t make any sense whatsoever.

Women Likely to be Included in Draft