Senate Democrats are divided on how to approach the nomination of Judge Neil Gorsuch to the Supreme Court, making it likely that he'll be confirmed. 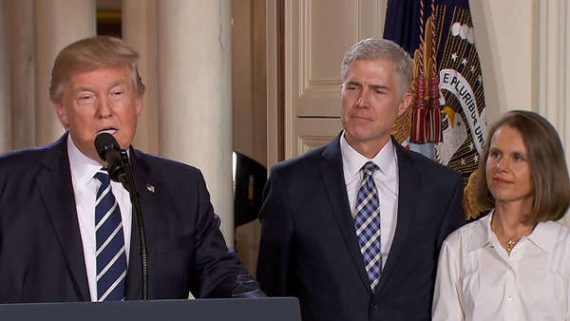 With the confirmation hearings for Judge Neil Gorsuch set to begin in less than a week, Senate Democrats appear divided over how they should approach the nomination, making it highly unlikely that any effort to block his nomination will succeed:

Democrats can’t seem to land a punch on Neil Gorsuch — and it’s not even clear they want to.

President Donald Trump’s Supreme Court nominee has breezed through more than 70 meetings with senators. Opponents who’ve scoured his record have found little to latch onto. And some Democrats are privately beginning to believe that Gorsuch — barring a blunder at his Senate confirmation hearings next week — will clinch the 60 votes he needs to be approved without a filibuster.

Senate Minority Leader Chuck Schumer of New York has been taking the temperature of the Senate Democratic Caucus but hasn’t begun whipping hard against Gorsuch, sources familiar with the matter said.

Indeed, despite anger from the Democratic base that senators have cowered from a fight against Trump’s high court pick, the sole strategic decision the Democratic Caucus has made about Gorsuch ahead of his confirmation hearings is to make no decision at all.

“The only thing we’ve decided as a caucus is to ask members not to make any public commitments until the hearing phase is finished,” Senate Minority Whip Dick Durbin (D-Ill.) said.

Some embrace the tactics advocated by Sen. Jeff Merkley (D-Ore.) to wage a filibuster and bait Senate Majority Leader Mitch McConnell into trying to change Senate rules. The gamble would be that the Kentucky Republican doesn’t have the votes — or, if he does, that Democrats will win the next presidential election in 2020 and ultimately benefit from the new rules.

Or Democrats could wave Gorsuch through, reasoning that confirming him won’t change the balance of the court — but the next vacancy would, and they’d be left without a 60-vote threshold as a weapon.

“When is it that [Democrats] fall on the sword?” said New Jersey Sen. Robert Menendez, summing up his party’s quandary. “Is it on this one or the next one?”

Exacerbating the indecision is the fact that a handful of Democrats facing tough reelection bids next year may face political retribution from the right or left, no matter how they vote on Gorsuch. The competing impulses have produced a public posture of apparent ambivalence and, according to one Democratic senator, a feeling that “there is no caucus strategy.”

It was really only last week — when a trio of liberal senators held a news conference to denounce what they called Gorsuch’s “anti-worker, pro-corporate” record — that some Senate Democrats began criticizing the judge’s credentials.

“There’s a fierce urgency at the grass roots that is not being echoed by the Senate Democrats,” said Ben Wikler, the Washington director for MoveOn, which joined 10 other groups in a letter urging Senate Democrats to, essentially, step it up. “The notion that Democrats should wait until after the hearings to speak their mind is a strategy to win a race by running hard in the last 30 seconds.”

Senate Democrats acknowledge the pressure from their base. But key influential players in the Gorsuch fight say it’s not their role to automatically reject the nominee.

“Our job is to put together the hearing,” said California Sen. Dianne Feinstein, the top Democrat on the Judiciary Committee. “Why have a hearing if everybody is going to take a position? … So to be talking about whether I’m for or against at this stage makes no sense at all to me because it’s uninformed.”

North Dakota Sen. Heidi Heitkamp, a red-state Democrat up for reelection who’s under heavy pressure from conservatives and liberals on the Supreme Court decision, stressed that “we should be open to supporting any nominee.” As for liberals calling on her to oppose Gorsuch, she said: “I get pressure from the left all the time. I wasn’t sent here to respond to pressure.”

Sen. Joe Manchin of West Virginia, who’s in the same political predicament as Heitkamp, added that he is “truly and totally concerned” that a Democratic filibuster would prompt Republicans to do away with the 60-vote threshold for Supreme Court nominees. He is the only remaining Democrat to vote against the party’s rules change in 2013.

“You need nine members. It doesn’t work with eight,” Manchin said of the Supreme Court and Democrats who would deny Gorsuch a seat. “I understand the Democrats being so upset. I understand it. … That doesn’t make it right to go along with eight. If you think [Republicans] are going to give you a center-left [judge], they’re not! Come to grips with it.”

As things stand, one suspects that Gorsuch will basically sail through the Senate and be easily confirmed within the next month or so. For one thing, in the time that has passed since President Trump named Gorsuch as his selection to replace the late Justice Antonin Scalia there haven’t been any reports about anything in Gorsuch’s record, whether it’s his opinions as a Circuit Court Judge or anything he’s written or said outside that context, that would seem to be the most likely outcome of this process. In fact, one could make a fairly good case that Democrats would be wiser to hold their fire on this nomination rather than going full bore in a way that ultimately backfires on them. As noted, and as I argued when Gorsuch was first named as Trump’s nominee, putting him on the Court will merely return the Court to the same balance that existed when Justice Scalia was alive, four conservatives appointed by Republican Presidents, four liberals appointed by Democratic Presidents, with Justice Kennedy in the middle playing the balancing act that he has played for almost his entire time on the bench and to an even greater degree since Justice O’Connor retired in 2005. Confirming Gorsuch will do little to change the long-term direction the Court takes. That won’t be true about the next Court pick which, based on statistics and the age of the Justices is most likely going to happen because either Justice Kennedy or Justices Ginsburg or Breyer decide that it’s time to retire. In that case, who the President picks will have a significant impact on the Court because it will reduce the influence of the liberal wing of the Court to the point where it won’t matter what a “swing” Justice like Kennedy does on a particular case because there would be an entrenched conservative majority that would likely stay in place for a decade or more depending on how long Justice Thomas decides to stay on the Court. At that point, it would make sense for Democrats to put up a real fight and dare Republicans to use the nuclear option to get a nominee through. Putting up that fight now risks the chance that the Republicans decide to do just that so when it comes time to replace a Kennedy, Ginsburg, or Breyer they are essentially powerless to do anything.

All of this depends on how Gorsuch’s confirmation hearings go, of course. If it turns out that there’s something controversial in his record, it’s possible that Democrats could use that as a rallying point to try to block his nomination. Absent that, though, and speaking purely from a tactical and long-term strategic point of view, going all-in on an effort to block Gorsuch, perhaps as revenge for what happened to Merrick Garland as some have suggested, would seem to be a bad idea. As it stands, all the Republicans need is for eight Democrats to join them in a cloture vote to move the nomination forward, and it seems likely that they’ll be able to find those votes. The most likely candidates for that support, of course, will come from the Senators who are up for re-election in 2018 in Republican states and/or states that Trump won in 2016 such as Wisconsin, Michigan, and Pennsylvania. Even if they ultimately vote against his nomination, few if any of these Senators are likely want to be labeled as having voted to block the President’s Supreme Court nominee. For that reason, as well as other, I suspect that Gorsuch will sail through the Senate rather easily. 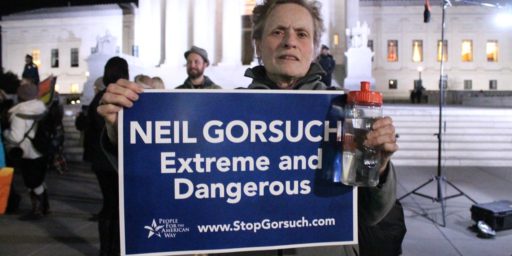