A powerful Democratic Senator looks like he's about to be in a whole lot of trouble. 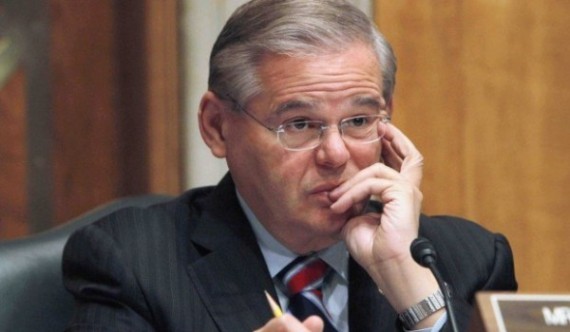 CNN is reporting that the Department of Justice is preparing to file criminal charges against New Jersey Senator Bob Menendez, who until the Democrats lost control of the Senate was the head of the powerful Senate Foreign Affairs Committee:

The Justice Department is preparing to bring criminal corruption charges against New Jersey Sen. Robert Menendez, alleging he used his Senate office to push the business interests of a Democratic donor and friend in exchange for gifts.

People briefed on the case say Attorney General Eric Holder has signed off on prosecutors’ request to proceed with charges, CNN has learned exclusively. An announcement could come within weeks. Prosecutors are under pressure in part because of the statute of limitation on some of the allegations.

The case could pose a high-profile test of the Justice Department’s ability to prosecute sitting lawmakers, having already spawned a legal battle over whether key evidence the government has gathered is protected by the Constitution’s Speech and Debate clause.

The FBI and prosecutors from the Justice Department’s public integrity section, have pursued a variety of allegations against Menendez, who has called the probe part of “smear campaign” against him.

The government’s case centers on Menendez’s relationship with Salomon Melgen, a Florida ophthalmologist who the senator has called a friend and political supporter. Melgen and his family have been generous donors to the senator and various committees the senator is associated with.

Investigators have focused in part on plane trips Menendez took in 2010 to the Dominican Republic as a guest of Melgen. In 2013, after word of the federal investigation became public, Menendez paid back Melgen $58,000 for the 2010 plane trips calling his failure to properly disclose the flights an “oversight.”

Menendez has denied any wrongdoing in his ties to Melgen. His spokeswoman did not immediately comment on CNN’s report that the Department of Justice is preparing charges against him.

One of the highest ranking Hispanic members of Congress, Menendez is a former chairman of the Senate Foreign Relations Committee. He has become one of the Obama administration’s most vocal Democratic opponents on two key foreign policy matters — President Obama’s decision to ease the trade embargo against Cuba and also his effort to engage direct negotiations with Iran over that country’s nuclear program.

Menendez advocated on Melgen’s behalf with federal Medicare administrators who accused Melgen of overbilling the government’s healthcare program, according to court documents and people briefed on the probe. Melgen was among the top recipients of Medicare reimbursements in recent years, during a time when he was also a major Democratic donor. Melgen’s attorneys have denied any wrongdoing.

Prosecutors also are focusing on whether Menendez broke the law in advocating for Melgen’s business interest in a Dominican Republic government contract for a port screening equipment. The U.S. Customs and Border Protection agency, at the time, considered donating port screening equipment to the Dominican Republic, which would have hurt the contract of Melgen-controlled company.

During a Senate subcommittee hearing in 2012, Menendez didn’t mention ICSSI, Melgen’s company, by name, but he did press Deputy Assistant Secretary of State Matthew Rooney about an unnamed company who had a contract to X-ray cargo that went through all Dominican ports — a contract that, he said, Dominican authorities “don’t want to live by.”

“If those countries can get away with that, they will,” the senator said. “And that puts American companies at a tremendous disadvantage.”

Menendez’s office said at the time the senator’s interest was based on his efforts to combat narcotrafficking in the region.

The connections between Menendez and Melgin have been the subject of news stories and allegations of corruption and influence peddling for quite some time now. Just when he took over the Chairmanship of the Foreign Relations Committee two years ago, for example, it was being reported that a Federal Grand Jury in Miami was investigation Menendez and his ties to Melgin. Around that same time, allegations began to surface that Menendez allegedly had sexual relations with one or more underage prostitutes while on a trip to the Dominican Republic that was paid for by Melgin. However, the women who made that claim quickly recanted their story and, shortly thereafter it was reported that these women were paid to fabricate the prostitution story and that there may have been some connection between those payments and The Daily Caller, which originally pushed the prostitution story. While those charges were quickly dismissed and forgotten, though, the investigation into Menendez and his relationship with Melgin has quite obviously continued, and now that Eric Holder is preparing to leave office it seems apparent that the Justice Department is ready to proceed forward with what will no doubt by a high-profile criminal case against one of the most powerful Democrats in the Senate.

While this is the first that the ongoing investigation of Menendez has made the news in some years, there was a technical glitch at the Third Circuit Court of Appeals earlier this week that made clear that there’s been a battle going on behind the scenes between Menendez and his lawyers and the United States Attorney for some time:

The FBI probe has already spawned a legal battle between the government, Menendez and his former aides. Last week, the Third Circuit Court of Appeals briefly posted, apparently by accident, documents detailing legal efforts to block certain evidence and testimony the government wants to use.

The documents were quickly put back under seal, but not before a reporter with the New Jersey Law Journal secured a copy and later published a story.

The fight centers in part on the Justice Department’s attempt to compel testimony from Menendez’s aides, some of whom have refused to answer questions to a grand jury.

According to the documents, the government wants to question aides about a series of 2012 calls and meetings on Melgen’s fight with the Center for Medicare and Medicaid Services, a federal agency. Among these is a meeting among Mendedez, Sen. Harry Reid and then Health and Human Services Secretary Kathleen Sebelius. The government is also pushing to use emails between Menendez’s office and a CBP official about the Dominican ports issue.

A federal district court ruled in favor of the government to compel testimony from Menendez’s aides, but the appeals court reversed the ruling and ordered a hearing.

“The parties primarily dispute the legislative character of Senator Menendez’s two conversations with [then acting CMS administrator Marilyn] Tavenner and his meeting with Secretary Sebelius,” the appeals court said. “These communications are not manifestly legislative acts because they are informal communications with executive branch officials, one of whom was at the time a presidential nominee whose nomination was pending before the United States senate.”\

The Speech and Debate Clause of the Constitution is set forth in Article I, Section 6, Clause 1 and states members of Congress:

shall in all Cases, except Treason, Felony and Breach of the Peace, be privileged from Arrest during their attendance at the Session of their Respective Houses, and in going to and from the same; and for any Speech or Debate in either House, they shall not be questioned in any other Place.

The clause has generally been construed somewhat broadly to include not just immunity from arrest while Congress is in session, but also criminal immunity for performing what are essentially the official duties of their respective offices, although what exactly that constitutes is somewhat unclear. In a rather famous case involved former Senator Mike Gravel, the Supreme Court ruled that the privilege created by the clause extends to Congressional aides when they are performing duties that would be considered immune if they were being performed by the legislator themselves. Based on these pretrial rulings, which you can read about in more detail at the New Jersey Law Journal, it seems apparent that the Speech and Debate Clause will be part of the Menendez’s overall defense in the case to come and in his attorney’s efforts to preclude certain evidence from being presented at trial. At the very least, that will give the Federal Courts the opportunity to further clarify this rather obscure part of the Constitution.

Obviously, Menendez is entitled to the same presumption of innocence as any other criminal Defendant, especially given the fact that charges have not even been filed at this point. However, since the filing of an indictment does seem to be imminent it is inevitable that questions about his political future will start to be raised. His current term doesn’t end until after the 2018 elections and, given the fact that he has been fighting the Justice Department behind the scenes over this investigation, it’s apparent that he isn’t going to give up easily. However, with Republicans in charge of the Senate an Ethics Committee investigation now seems far more likely and that, combined with a criminal trial will no doubt take their toll on the Senator as time goes on. Whether that leads to a resignation or not remains to be seen, but it’s certainly not beyond the realm of possibility.