Congressman Seth Moulton of Massachusetts is the latest Democrat to enter an already crowded field.

Congressman Seth Moulton of Massachusetts, who has been hinting for months now that he may enter the race for the Democratic Presidential nomination, made that announcement formal this morning thus joining an already crowded field of potential Democratic contenders:

Representative Seth Moulton of Massachusetts, a third-term congressman who has pushed for a “new generation of leadership” in Washington, declared his candidacy for president on Monday, becoming the 19th candidate to enter the Democratic primary field.

“I’m running because I’m a patriot, because I believe in this country and because I’ve never wanted to sit on the sidelines when it comes to serving it,” Mr. Moulton said Monday on ABC’s “Good Morning America.”

Mr. Moulton, 40, garnered attention in November when he helped lead a group of rebellious Democrats who had sought to deny Speaker Nancy Pelosi the gavel in the new Congress. The effort was unsuccessful, and Mr. Moulton ultimately voted for Ms. Pelosi. His online biography paints him as something of a disrupter, noting that he was “the only Democrat to unseat an incumbent in a primary” in the House of Representatives when he was first elected in 2014.


“We need to restore our moral authority in everything we do. Whether it’s appointing a Cabinet member, negotiating a treaty or signing an executive order, I will always uphold America’s values,” he said in a video announcing his campaign.

During his time in Congress, Mr. Moulton, who represents a district in northeastern Massachusetts, has passed bills aimed at improving the way health care is delivered to veterans and making government travel more efficient. Given his background as a veteran, his campaign is likely to concentrate on national security and foreign affairs — areas that have received relatively scant attention from other candidates, who have focused more heavily on domestic issues such as health care and the economy.

By focusing on his military service and his relative youth, Mr. Moulton will seek to draw a contrast to President Trump, who is 72 and received several draft deferments during Vietnam.

“I’m going to talk about patriotism, about security, about service,” he said Monday. “These are issues that for too long Democrats have ceded to Republicans, and we’ve got to stop that. Because this is actually where Donald Trump is weakest. We’ve got to take him on on these issues.”

As noted, Moulton has served as the Congressman from Massachusetts’s 6th Congressional District since first being elected to that seat in 2014. He has since been re-elected twice, in 2016 and 2018, with high margins of victory over what has amounted to token opposition. Prior to that time, Moulton had graduated from Harvard University with a B.A. in Fine Arts and joined the Marine Corps, serving four tours of duty in Iraq during which he earned two Bronze Stars and attained the rank of Captain before leaving in the service in 2008. Moulton’s unit was among the first American units to enter Baghdad during the war, receiving his commendations during two battles in 2003 and 2004 after the fall of Baghdad. After the Marines, Moulton returned to Harvard where he took part in a dual-degree program at Harvard Business School and Harvard’s Kennedy School of Government, earning a Masters of Business Administration after which he entered the private sector before entering politics. In 2014, Moulton made some national headlines by challenging incumbent Democrat John Tierney for the Democratic nomination in the 6th District, making some waves by stating publicly that he opposed the Iraq War in which he had served. Moulton ended up beating Tierney by a narrow margin in a closely fought race.

As noted, Moulton has most notably distinguished himself as one of the Members of Congress who attempted to take on Nancy Pelosi and the rest of the House Democratic Leadership both after the 2016 election and in the wake of the Democratic Party’s successful effort to retake control of the House of Representatives in 2018. While those bids were unsuccessful. they did earn Moulton no small degree of public notoriety as something of a rebel inside his own party, Moulton has also highlighted issues such as election reform, including proposals to make Election Day a national holiday. He has also argued in favor of abolishing the filibuster and the Electoral College. although as a member of the House he obviously has no say on the issue of the filibuster and would have no say on the issue as President.

Given the size of the Democratic field, it’s hard to see how Moulton is going to distinguish himself sufficiently from a bunch of other candidates who are also young, mostly progressive-leaning, and somewhat out of step with the older members of their party. Nathaniel Rakich at FiveThirtyEight offers up some possible paths to victory for Moulton, but they seem to be pretty far-fetched at the present time. As noted, Moulton is one of several members of the House of Representatives in the Democratic field. and it certainly isn’t among the best-known among them. Add into this the fact that we have not elected a President directly from the House of Representatives in some 139 years it seems unlikely that candidates like Moulton will be able to distinguish themselves in an already crowded field. 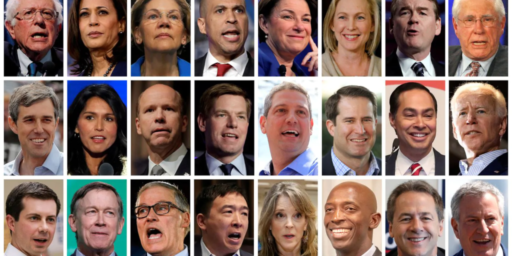