At Congressional town halls across the country, there are signs of what could turn into a movement that would cause real headaches for the GOP in future elections. 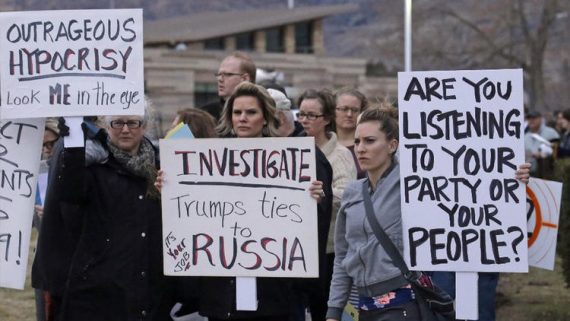 The original Tea Party movement emerged in the wake of the election of Barack Obama and went on to lead the Republican Party to victories in the 2010 and 2014 mid-terms that essentially reversed the elections in 2006 and 2008 that had reduced GOP power in Washington to a bare minimum. While there were several issues that motivated the people who made up the movement including the spending package that then President Obama proposed as part of his plan to spur a recovery from the Great Recession, the main motivation for the protests quickly focused on the Affordable Care Act, which was making its way through Congress and which protesters started derisively calling “Obamacare.” One of the places where the early signs of this movement could be seen were at the town halls that members of the House of Representatives and Senate held across the country in 2009 and 2010, where crowds of anti-Obama citizens, many of them quite angry, would show up and demand answers from their representatives. Now, just three weeks into the Trump Administration, there are at least some signs that something similar may be happening in response to the election of Donald Trump and what appears to be the imminent fulfillment of the Republican promise to repeal the Affordable Care Act

More than seven years after angry anti-Obamacare town halls erupted across the country, raw emotions are boiling over again — this time, as the Republican Party under President Donald Trump gears up to dismantle Barack Obama’s legacy.

And the fury is flaring up in some of most conservative corners of the country.

On Thursday night, two Republican members of Congress — Reps. Jason Chaffetz of Utah and Diane Black of Tennessee — were each confronted with impassioned constituents during simultaneous events. The shouted questions, emotional pleas and raucous protesters of the evening crystalized the GOP’s tough political road ahead as it forges ahead with rolling back Obama’s accomplishments, including the Affordable Care Act.

In suburban Salt Lake City, local police estimated that some 1,000 people packed into a high school auditorium to see Chaffetz as hundreds more waited outside. For 75 minutes, the congressman confronted a crowd that fumed with resentment of Trump and accused Chaffetz of coddling the President.

And some 1,700 miles away in the town of Murfreesboro, Tennessee, Black was met with roughly 100 protesters at a “Ask Your Reps” event hosted by the Middle Tennessee State University’s College Republicans.

Mike Carlson, a 32-year-old student from Antioch, Tennessee, said that as an overweight man, he depended on Obamacare to stay alive.

Jessi Bohon, a 35-year-old high school teacher who lives in Cookeville, Tennessee, was visibly emotional as she stood up and posed her question.

“As a Christian, my whole philosophy in life is pull up the unfortunate,” Bohon said, a comment that drew verbal affirmation from others in the room. “The individual mandate: that’s what it does. The healthy people pull up the sick.”

Bohon went on to ask how Congress could be OK with “punishing our sickest people” rather than trying to “fix what’s wrong with Obamacare,” the sweeping healthcare law that covers 20 million Americans.

Black responded that Obamacare’s individual mandate — which requires everyone to have health insurance or pay a penalty — still allowed millions, including many young and healthy people, to be without coverage.

“About 20 million people did actually come into the program who were uninsured,” Black said. “You don’t want to hurt one group of people to help the another. We can help both groups at the same time.”

Bohon shot back: “How many of those people were in states where they played a political game with people’s lives?”

Black appeared flustered, and declined to continue. “I’m going to pass this one,” she said.

Bohon told CNN afterward that as a state employee, she receives health insurance through the state. Her question to Black, she said, was motivated in part by her Christian beliefs, as well as her upbringing in the coal-mining town of Grundy, Virginia.

“Growing up in the community that I grew up, in Appalachia, because we were so poor there that we had to take care of each other,” Bohon said.

The crowd erupted in chants of “Do your job!” when Chaffetz, the chairman of the House Oversight Committee, was pressed on why his panel spent months investigating Clinton’s emails but has not yet launched inquiries into Trump’s taxes (Trump has declined to release his tax returns).

“You’re really not going to like this part: The President, under the law, is exempt from the conflict of interest laws,” he said.

But for the most part, he confronted an angry Democratic base even in deep-red Utah and in a district where he was just re-elected with a margin of victory of 47 percentage points.

At one point, he cast new Education Secretary Betsy DeVos — confirmed this week on a 51-50 vote — as a common enemy, touting a bill to abolish the Department of Education and hand all control over schools and their funding to states.

“I want to get rid of Betsy DeVos!” Chaffetz said.

A man in the crowd shot back: “We want to get rid of you!”

Obviously, it is far too early in the Trump Administration, and the campaigns of 2018 and 2020 are too far away, to say if what we’ve seen at a handful of Congressional town halls is indicative of anything other than leftover anger from the 2016 election that will eventually peter out. Additionally, it’s hard to tell if what we’re seeing is spontaneous or something that is being organized by groups close to the Democratic Party base such as Organizing for America and the groups that coalesced around Bernie Sanders during the race for the Democratic Party’s Presidential nomination last year. It’s also hard to tell if what we’re seeing now will have the kind of staying power that the Tea Party movement did that made it possible for it to have such a significant impact on American politics for the past seven years. At the very least, though, it does appear from these reports that, just as conservatives used the idea of a liberal named Saul Alinsky to help organize the original Tea Party movement, the left has learned from the success of the Tea Party movement. As Amber Phillips at The Washington Post notes, this is a phenomenon that Republicans should be careful about going forward:

Republicans are fully in control of Washington for the first time in a decade, and they haven’t forgotten the motivating issue for their base in 2009. Repealing Obamacare — and replacing it with something else — is their top priority. Republicans took procedural steps on their first week back in Congress this January to make that happen.

But in the absence of an agreed-upon plan to replace it — and the very real threat of millions of people losing their health-care coverage in the process — Republicans’ confident, steady march toward health-care reform has stalled. Lawmakers themselves are anxious about how to smoothly pull out health care from millions of people and quickly slip something better in its place.

Enter a united, fired-up left, which has taken to streets across the nation not once but twice in President Trump’s first few weeks in office. These protesters didn’t just come out in Washington and Los Angeles, but in Wichita, rural Virginia and Anchorage. It has all the appearance, as my colleague James Hohmann wrote recently, of the liberal answer to the tea party movement.

The question Republicans in Congress must ask themselves is where the parallels between 2009 and 2017 end. Are Thursday’s town halls early warning signs of a historically major loss to come for Republicans in the 2018 midterms? (Not likely in the Senate, given the map is so favorable for Republicans.) Is this a movement that will give rise to new liberal leaders in a party that many believe desperately needs them? Or will moments like Thursday’s events pull the Democratic Party further to the left in a way that hurts its electoral chances? Will these people even vote in 2018, given they expressed their frustration after the election?

At the very least, Thursday’s town halls are broadcasting to Republicans in Congress what most of them already know: If you’re going to repeal Obamacare, you better make sure you replace it with a plan that truly is, in Trump’s words, “something terrific.” Because health care has proven to be an issue that gets people into town halls and out to voting booths.

The possibility that disdain for Donald Trump, whose job approval and personal favorability numbers remain historically bad for an incoming President, could combine with concern over health care to lead to a mass protest movement is clearly something that Republicans on Capitol Hill will need to pay attention to going forward, especially as they proceed with their plans to repeal the Affordable Care Act now that they actually have the political power necessary to do so. That’s one reason why a debate has erupted inside the Republican Party about how to proceed on this front, with many Republicans in the House and Senate beginning to take the position that the party needs to have a replacement for the ACA in place and also needs to account for the impact that repealing the ACA will have on people who have obtained coverage because of it, such as people with pre-existing condition, those who are getting their premiums subsidized by the government thanks to the program, and people who have received coverage due to the expansion of Medicaid in states that have signed on for that part of the law. Failure to do so could result in the same type of political firestorm that propelled the GOP to control of Congress.

In addition to the ACA, these protests also appear to be motivated for disdain for President Trump. While it’s likely that much of this consists of people disappointed by the results of the election, this anti-Trump factor is also going to be something that Republicans will need to be careful about going forward. For better or worse, the Washington “establishment” Republican Party made its peace with Trump either before the election or very quickly after he won. In reality, of course, they didn’t really have a choice. As President, he has the potential to wield a vast amount of power as well as the ability to either help them in enacting their own agenda or to block them with little hope that they’d be able to do anything about it since they obviously can’t count on Democratic votes to override any vetoes that may occur over the next four to eight years. This is why you saw people from Paul Ryan and Reince Priebus to Mitch McConnell and Ted Cruz set many of their differences with Trump aside and largely supporting the Administration. The problem with that strategy is that it could easily backfire if opposition to Trump spreads like wildfire in response to one thing or the other that he does or says, something that becomes inevitable any time he picks up his phone to Tweet. At that point, what is now just protests at a handful of town halls could become a nationwide movement that could pose real problems for the Republican Party in future elections.