In a healthy democracy we need not agree, nor must we finally even respect one another's objects of devotion.  But we should exercise a salutary measure of mutual forbearance and be willing to acknowledge that no side has a monopoly on either truth or justice. 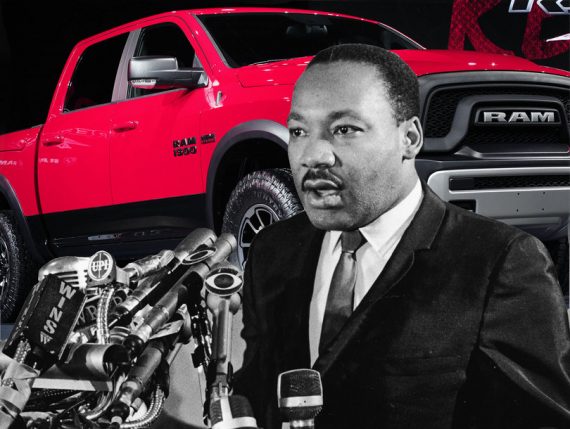 I proudly stand for the national anthem, but I don’t get worked up about folks who don’t.  Last I checked we live in a free country and it’s (still) within our rights to protest.  Nor I do feel any compulsion to scrutinize these protesters’ reasons or to question their patriotism.  Stand. Sit.  What difference does it make?  How does it affect my self-interest?  So frankly I do not understand people who do get worked up about the NFL protests.  Or, that is, I didn’t understand these folks until I took note during the Super Bowl of my own self-righteous feelings that something sacred had been desecrated—or at least disrespected—by the use of Dr. Martin Luther King Junior’s recorded voice to sell Ram trucks! How DARE they! How shameful! My own Super Bowl crew was divided on the commercial, but I took a firm stand—the righteous stand. The commercial was flat-out wrong.

Self-righteous anger at those who kneel for the national anthem. Self-righteous anger at corporations that use MLK’s voice to hawk trucks (presumably with the permission of representatives of the King estate).  In at least one decisive sense it’s the same thing. All of us are wired to set aside select persons, places, artifacts, and principles as sacred and worthy of our highest respect and devotion. What those objects of respect are, of course, vary between people and also within our own lives over the course of our lives.  All of these objects of veneration are, from an outside perspective, curious or puzzling or even silly. But none of us should fool ourselves that we alone are driven by reasoned principle or are free of “irrational” devotion to the sacred.  As psychologist Jonathan Haidt reminds us, we’re all self-righteous, or can be on occasion.   And depending upon the issue, we’re all “snowflakes,” too.  We’d be inhuman monsters if our feelings were unaffected by the judgments of others.

I, no less than many, am forever tempted to remove the speck from others’ eyes without feeling the slightest need to remove the log from my own eye.  For me this is perhaps most true in the political arena in large measure because (as everyone rightly points out) our politics have become so severely tribalized.  Not just our principles but our biases and prejudices and mistaken judgments are reinforced and even commended by those on our team. We owe it to ourselves as well as to one another to subject our own thoughts to scrutiny. We owe it to ourselves and others to appropriate a measure of intellectual modesty.  So long as people are free to think, people will disagree.  It would not only be polyanna-ish but downright despotic to expect agreement or consensus.  My cherished objects of devotion will not be yours.  In a healthy democracy we need not agree, nor must we finally even respect one another’s objects of devotion.  But we should exercise a salutary measure of mutual forbearance and be willing to acknowledge that no side has a monopoly on either truth or justice.