Support For Same-Sex Marriage Continues To Rise, Hits A Record 61%

Nearly one year after the Supreme Court's historic decision, public support for same-sex marriage continues to rise even among groups that were previously strongly opposed to it.

With the one-year anniversary of the Supreme Court’s decision in Obergefell v. Hodges approaching next month, a new Gallup poll finds that support for same-sex marriage continues to rise, and that Republicans seem to be the last demographic group where disapproval is a major issue:

Sixty-one percent of Americans say that marriages between same-sex couples should be recognized by the law as valid, consistent with the 58% and 60% recorded in 2015. Last year’s Supreme Court decision made same-sex marriage legal nationwide — but the issue remains contentious at state and local levels, among religious groups and within the Republican Party.

Public support for same-sex marriage has more than doubled over the past two decades. When Gallup first polled on the issue in 1996, about a quarter of Americans (27%) said such marriages should be recognized by law. Majority support was recorded for the first time in 2011, and the percentage has since grown.

The latest 61%, from the annual Values and Beliefs poll conducted May 4-8, is the highest in Gallup’s trend so far by one percentage point.

As the chart below shows, it’s been roughly five years since public opinion first shifted into positive territory, and support for marriage equality has been growing ever since: 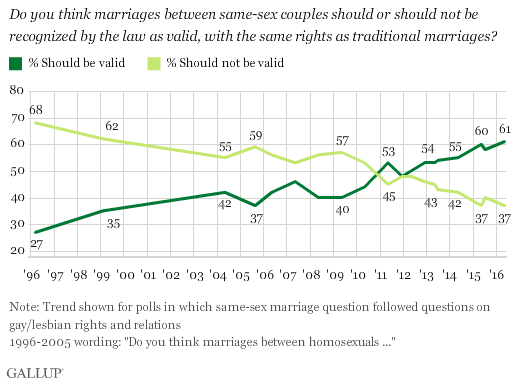 In the past, we’ve seen that support for marriage equality is much higher among some demographic groups than it is among others. That remains the case, but the significant thing about this poll appears to be that most of the major demographic groups now have a majority that supports same-sex marriage, something which indicates that public acceptance is likely to increase rapidly in the coming years. For example, it has generally always been the case that self-identified Democrats have supported marriage equality far more than any other political group, and that Republicans have supported it the least. As this chart shows, though, the gap between the various political groups is slowly shrinking and the point at which even a majority of Republicans support, or at least accept, same-sex marriage isn’t that far away: 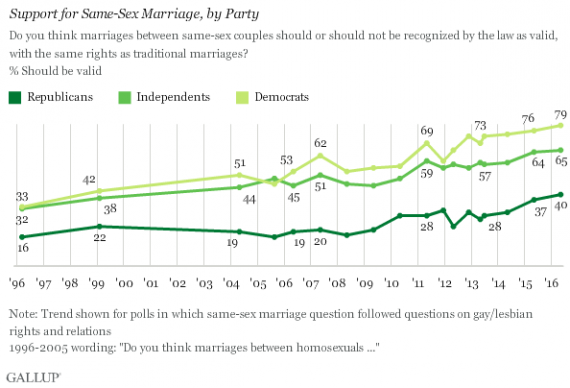 Ten years ago, barely ten percent of Republicans supported same-sex marriage. Today, that number is up to  40%, and it’s likely that even many of those who say they oppose it aren’t really all that interested in revisiting the issue. Perhaps the best sign of that can be seen in the recently concluded race for the GOP Presidential nomination where the candidates who were the most outspoken against Obergefell, such as Mike Huckabee, Rick Santorum, and Bobby Jindal, ended up seeing their messages fall flat and fellow opponent Senator Ted Cruz tended to downplay the entire issue of battle against marriage equality and was even quoted as telling a group of openly gay supporters in New York City that, if he became President, overturning Obergefell would not be among his priorities. The candidate who ended up winning the nomination, by contrast, barely discussed social issues at all during his campaign and whose stance on the entire issue of same-sex marriage has been rather vague from the start. Additionally, some Republicans have been openly debating whether the party should continue to push for a platform plank opposed to same-sex marriage and supporting a Constitutional Amendment seeking to overturn Obergefell. Given the trend in the polls among Republicans, one could easily see this being the last Presidential election cycle in which the GOP even takes a position on the issue.

In addition to political party, the other major demographic group breakdown where previous polling showed contrasts in public opinion was age, where older Americans were the one age group to oppose marriage equality. This poll seems to suggest that this has changed: 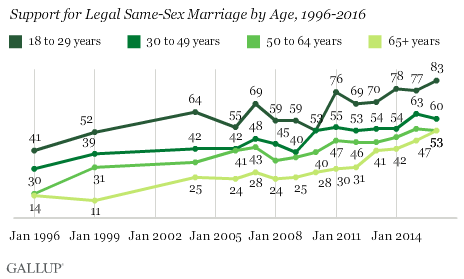 What’s significant here, of course, is that polling is showing that acceptance of same-sex marriage is now universal among nearly all segments of American society. The only group where supporters are in the minority appears to be among Republicans, and one presumes that the highest level of opposition among that group can be found among self-identified conservatives and those who are most religious. Those last two groups are likely to resist accepting marriage equality for some time to come, but the trends seem to make clear that the story for the rest of American society will be one of increased acceptance as time goes on. While this polling doesn’t necessarily mean much of anything politically given that the Supreme Court has spoken definitively on the issue and is unlikely to revisit it any time in the near future, it is an a rather interesting sociological phenomenon. Just twenty years ago, the majority of all Americans opposed same-sex marriage and the idea that it would be a reality in the near future seemed like an illusion. Today, nearly two-thirds of Americans support marriage equality and even those who oppose it seem eager to move on to some other issue. That’s a tremendous change in public opinion in a very short period of time, and one worth taking note of.