From Loving, To Windsor, To Obergefell, Liberty And Equality Prevail At The Supreme Court

The Supreme Court has issued a ruling whose roots can be found in case law going back half a century. 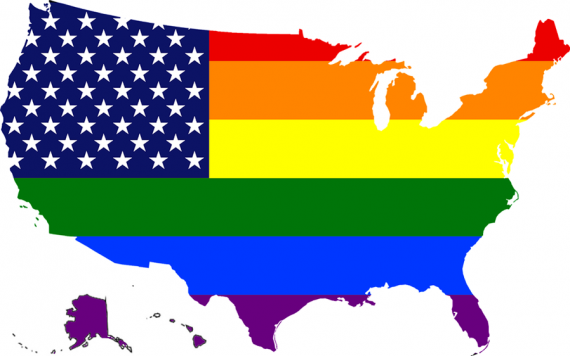 As James Joyner has already noted, today the Supreme Court held, relying on both the string of gay rights cases that began in 1996 with Roemer v. Evans and the Court’s landmark decision striking down laws barring interracial marriage in Loving v. Virginia, that states must recognize and license marriages between same-sex couples, bringing to an end a two decade long social, legal, and political debate:

WASHINGTON — In a long-sought victory for the gay rights movement, the Supreme Court ruled on Friday that the Constitution guarantees a right to same-sex marriage.

Justice Anthony M. Kennedy wrote the majority opinion in the 5 to 4 decision. He was joined by the court’s four more liberal justices.

The decision, the culmination of decades of litigation and activism, came against the backdrop of fast-moving changes in public opinion, with polls indicating that most Americans now approve of same-sex marriage.

Justice Kennedy said gay and lesbian couples had a fundamental right to marry.

“No union is more profound than marriage, for it embodies the highest ideals of love, fidelity, devotion, sacrifice, and family,” he wrote. “In forming a marital union, two people become something greater than once they were.”

“It would misunderstand these men and women to say they disrespect the idea of marriage,” Justice Kennedy said of the couples challenging state bans on same-sex marriage. “Their plea is that they do respect it, respect it so deeply that they seek to find its fulfillment for themselves. Their hope is not to be condemned to live in loneliness, excluded from one of civilization’s oldest institutions. They ask for equal dignity in the eyes of the law. The Constitution grants them that right.”

Chief Justice John G. Roberts Jr., in a dissent joined by Justice Antonin Scalia and Clarence Thomas, said the Constitution had nothing to say on the subject.

“If you are among the many Americans — of whatever sexual orientation — who favor expanding same-sex marriage, by all means celebrate today’s decision,” Chief Justice Roberts wrote. “Celebrate the achievement of a desired goal. Celebrate the opportunity for a new expression of commitment to a partner. Celebrate the availability of new benefits. But do not celebrate the Constitution. It had nothing to do with it.”

“The opinion is couched in a style that is as pretentious as its content is egotistic,” Justice Scalia wrote of his colleague’s work. “Of course the opinion’s showy profundities are often profoundly incoherent.”

In many respects, of course, this outcome is entirely unsurprising. For twenty-one years now, the Supreme Court has expanded the legal protections that are granted to gay and lesbian Americans. In Roemer v. Evans in 1996, the Court struck down a Colorado law that barred individual cities and localities from passing laws extending civil rights protections to their gay and lesbian citizens. Seven years later, the Court reversed its own 1986 decision in Bowers v. Hardwick and ruled that laws making sodomy a criminal act were unconstitutional as well. While this was going on, there were other political and legal battles going on at the state level. When the Hawaii Supreme Court threatened to issue a ruling that found a right to same-sex marriage, the legislature there responded by changing the law to define marriage as being between a man and a woman. Nationally, the action in Hawaii led to the passage of the Defense of Marriage Act, which defined marriage for Federal purposes as being between a man and woman and gave states the right to refuse to recognize same-sex marriages in in other states. Other states followed Hawaii’s, and by 2004 the political momentum was strongly on the side of the “traditional marriage” movement that it played a major role in the 2004 Presidential Election. Slowly but surely, though, the tide began to turn at the state level as courts in states such as Massachusetts and Iowa found that their state Constitutions required the recognition of same-sex marriages. Additionally, there was progress at the legislative as states, mostly in New England, legalized same-sex marriage through legislative means. Meanwhile, polling slowly began to show social acceptance of homosexuality in general, and same-sex marriage specifically.

The turning point, one could argue came roughly in 2012 as President Obama began his quest for re-election. Prompted in part by comments made by the Vice-President on Meet The Press, President Obama came out publicly in support of same-sex marriage just as North Carolina voters had approved what came to be the final law banning it passed in the United States. At the same time, the Defense of Marriage Act was being challenged in Federal Courts around the country. A year before, the Justice Department had announced that it could not in good faith defend the Constitutionality of the Defense of Marriage Act in court. That decision proved to be both controversial and prophetic, because it was two years ago today that the Supreme Court held that the provisions of the Defense of Marriage Act defining marriage were unconstitutional. On the same day, the Court had passed on ruling on the merits of state laws dealing with marriage, but the ruling in the DOMA case set off a judicial firestorm across the nation that brought us today as Court after Court found that state laws against same-sex marriage were unconstitutional. At the same time, public acceptance of marriage rights had become so widespread that legislative progress was possible as well and state after state joined in on changing their marriage laws to allow same-sex marriage.  Back in October, a group of cases in which state law bans against gay marriage had been struck down made their way to the Court, but the Court refused to accept those cases, which meant that eventually more than twenty-five states found themselves required to recognize same-sex marriage. The momentum continued after that, but it seemed at that point in early October that today’s outcome was inevitable. So, when the Sixth Circuit became the first Federal Circuit Court of Appeals to uphold laws barring same-sex marriage, we knew that the Court would be required to accept the appeals and this day would come.

Unlike James, I tend to think that the Court’s decision here was far less activist than the conservatives who are already decrying it will make it out be. Justice Kennedy’s majority opinion borrows heavily from Loving v. Virginia and its holding that marriage is a fundamental right protected by the Constitution and that the 14th Amendment bars states from passing laws that bar certain types of marriage for irrational reasons. Additionally, for twenty years now, the law has recognized that the rights protected by the Fourteenth Amendment mean that governments cannot discriminate against people merely because they are gay or lesbian. Considering the fact that this process started just ten years after the Court had ruled that it was acceptable for a gay man to be prosecuted for having consensual sex in his own home, the change was important but it was also correct. In each of these gay rights decisions, all of which were written by Justice Kennedy, the Court recognized that denying equal treatment under the law to gays and lesbians deprived them of the equal dignity that the Amendment was intended to create. Indeed, in these two paragraphs from his opinion today, Justice Kennedy seems to tie together Loving’s holding that marriage is a fundamental right and the string of opinion that begin in 1996 with Roemer

The Constitution promises liberty to all within its reach, a liberty that includes certain specific rights that allow persons, within a lawful realm, to define and express their identity. The petitioners in these cases seek to find that liberty by marrying someone of the same sex and having their marriages deemed lawful on the same terms and conditions as marriages between persons of the opposite sex.

No union is more profound than marriage, for it embodies the highest ideals of love, fidelity, devotion, sacrifice, and family. In forming a marital union, two people become something greater than once they were. As some of the petitioners in these cases demonstrate, marriage embodies a love that may endure even past death. It would misunderstand these men and women to say they disrespect the idea of marriage. Their plea is that they do respect it, respect it so deeply that they seek to find its fulfillment for themselves. Their hope is not to be condemned to live in loneliness, excluded from one of civilization’s oldest institutions. They ask for equal dignity in the eyes of the law. The Constitution grants them that right.

Contrary to the views of the Court’s conservatives, the protections of the Fourteenth Amendment were obviously never meant to be set in stone as what they were when the Amendment was ratified. If that were what the drafters of the Amendment intended, then they would have drafted a far more restrictive document that restricted its application to African-Americans. They did not do so, though, they wrote an Amendment that provides that all Americans are entitled to the same protections of life, liberty, and property and entitled to same equal protection of the laws. Specifically, the decisions that have followed in the wake of the 14th Amendment’s ratification have slowly but surely made clear that if government could not support their laws discriminating against gays and lesbians with a rational justification, then the law could not withstand scrutiny. That language has been found to apply to laws that discriminate based on race, ethnicity, gender, and a number of other bases and, starting in 1996, it was extended for the first time to sexual orientation. That’s what led the Court to its decision in Roemer and its decision in Lawrence saying that people could not be treated like criminals for engaging in a consensual relationship. Although the 14th Amendment doesn’t apply to the Federal Government, identical case law under the Equal Protection Clause of the Fifth Amendment was the basis for the ruling in Windsor and the striking down of a law that never should have been passed. After Windsor, Court after Court has found that there is simply no rational basis for barring persons of the same gender from being legally married. The fact that Judges from across the legal and political spectrum, judges appointed by every President from Ronald Reagan to Barack Obama, have ruled in favor of marriage equality seems to demonstrate to me that this is not a radical holding from the Court, indeed Kennedy’s opinion is careful to limit itself to the issue at hand, but is instead the logical conclusion of a Supreme Court holdings going back as far as 1967 if not further.

There are legal, social, and political issues here that will still need to be debated and resolved in the appropriate forums. This ruling itself will no doubt be the subject of controversy going forward, but on the whole this is a very good day for individual liberty, equality under the law, and the Fourteenth Amendment. It will go down in history as a decision as significant as Loving, and I suspect that in a very short period of time the vast majority of Americans are going to wonder what the heck ever took so long to get to this day.