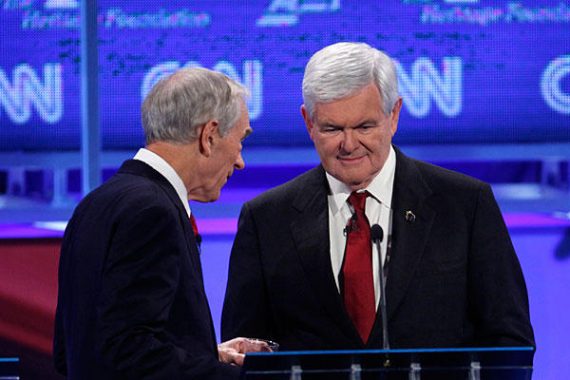 The new Des Moines Register Poll was released last night just hours after Herman Cain had announced he was suspending his campaign, and, as expected, it showed Newt Gingrich surging into the lead, but it was who’s in second place that may seem surprising:

With the dizzying fall of Herman Cain, Newt Gingrich has stepped into the breach and now stands alone as the most popular GOP presidential candidate in The Des Moines Register’s new Iowa Poll.

Cain, who suspended his campaign Saturday, had plunged from 23 percent to 8 percent in just over a month, tied with Michele Bachmann.

In a race that’s still far from settled, previous candidate surges have had a half life. But Gingrich’s comes at a critical time — with just a month until the first votes are cast in the nation’s GOP nominating contest. The key question is whether his support represents momentum or a peak.

Rounding out the field: The two Ricks, Perry and Santorum, are locked in a tie at 6 percent. At the bottom is Jon Huntsman at 2 percent.

Selzer & Co. of Des Moines conducted the poll of 401 likely Republican caucusgoers Nov. 27-30. The poll has a margin of error of plus or minus 4.9 percentage points.

The race remains elastic. Eleven percent of likely caucusgoers are uncommitted to a first choice, and 60percent are still willing to change their mind. A single day’s news can seesaw opinions.

The departure of Herman Cain obviously changes the race in Iowa, and elsewhere, to some degree, and the Register poll provides some clues as to where Cain’s remaining supporters might go, and it’s good news for Newt Gingrich:

If Herman Cain supporters in The Des Moines Register’s new Iowa Poll are redistributed to their second-choice candidates, the results show what could happen without him in the race.

Mitt Romney, Rick Perry, Ron Paul and Michele Bachmann each go up one point, as does the undecided number.

Three additional percentage points for Gingrich, who leads the new poll with 25 percent support, further separates him from the rest of the field

So, that puts the field at Gingirch 28%, Paul 19%, Romney 17%, Bachman 9%, Perry 7%, Santorum 6%, and Huntsman 2%. Gingrich’s lead increases to +9 over Paul and +11 over Romney.  Of course, it’s possible that some of Cain’s supporters actually would slip into the undecided category instead, so we’ll have to wait for a new poll without Cain to see the real impact, if any of his withdrawal.

The race looks pretty much the same in the NBC News/Marist poll of Iowa:

In Iowa, which holds its caucuses on Jan. 3, Gingrich gets the support of 26 percent of likely caucus-goers (including those leaning towards a candidate) — a 21-point jump since October.

He’s followed by Romney at 18 percent (an eight-point decline), Texas Rep. Ron Paul at 17 percent (a five-point increase), Herman Cain at 9 percent (an 11-point drop) and Texas Gov. Rick Perry at 9 percent (a two-point dip). No other Republican presidential candidate gets more than 5 percent support among likely caucus-goers.

With Cain’s decision to suspend his campaign — which he announced on Saturday — a reallocation of his supporters’ second-choice picks puts Gingrich ahead of the Iowa horse race with 28 percent; Paul and Romney are tied at 19 percent; and Perry lands at 10 percent.

Overall among all Republican respondents in Iowa, the breakdown is Gingrich with 25 percent, Romney at 18 percent and Paul at 16 percent.

And, finally, the newest Insider Advantage Poll [PDF] actually shows Gingrich with a larger lead, 28% to 13% for Romney and 12% for Paul. That poll includes Herman Cain, and while there’s no detail given about second choices for Cain supporters, one can assume it’s roughly similar to the Register and Marist polls.

So, we’re looking at a situation on the ground in Iowa where Gingrich is soaring, Romney seems to be slipping, and Ron Paul of all people is rising in the polls to the point where he could potentially in second place by himself. All of this leads Andrew Malcom to ask a question:

It starts at 7 p.m. and depends on a candidate’s determined supporters being prepared to go out on a cold night and hang in all evening, schmoozing, campaigning, bargaining and voting ballot after ballot after ballot until maybe midnight on a school-work night.

Romney has not been working to win in Iowa, having been spanked into second place there four years ago by Mike Huckabee. Gingrich didn’t open his first Hawkeye state campaign office until this week.

However, Paul’s people are not just supporters; they are disciples, some even willing to doff their clothes for him, as we wrote here. They will also stand (clothed) for windy hours with signs on Interstate overpasses for their guy.

And all fall while other candidates rocketed up and flamed out, the Paul campaign, his third for the presidency (1988 and 2008), has been seeking volunteers from across the country to travel to Iowa for pre-caucus campaigning.

More over, the Paul campaign, even in its 2008 vintage has proven to be surpisingly skilled at organizing those supporters and getting them to straw polls, conventions, rallies, and other events. That’s the kind of ground operation that could prove very helpful on a cold night in January just a few days into the New Year, and it’s something that Newt Gingrich seems to be lacking in the Hawkeye State. Of course, this may not be as big a problem for Gingrich as most pundits and bloggers, including yours truly, have believed. Matthew Dowd argues today in National Journal, for example that the nature of the Republican caucuses does not require the type of organization that the Democratic caucuses do:

One reason this myth gets repeated is that there is confusion over the Democratic process in the Iowa caucus and the Republican process. The Democratic caucus is much more complicated. It involves meeting certain mandated thresholds, convening in groups at each caucus, reconvening, and using various mathematical equations that are instrumental to choosing a winner. In that process, an organization is a huge advantage, helping lead each individual precinct caucus and having many folks that understand the byzantine Democratic rules.

For Republicans, this isn’t true. The Republican caucus is very simple and is much like the Ames Straw vote held last summer. Folks show up at a meeting place, you count their votes, and you know who won or lost by adding the votes up from around the state. An organization is not a necessity if you have enthusiastic supporters.

This leads us to a point I have made numerous times. What is needed in the Iowa Republican Caucus is energized voters and momentum going into that day. If you have those things, an organization is not a real necessity.

That would seem to bode well for Gingrich, but also for Paul. Not only is he seemingly surging at what appears to be just the right time — it was right around this time that Mike Huckabee starting moving up in the polls four years ago, for example — and he also has a dedicated group of supporters willing to go out on a cold January night to support their man. As unlikely as it seems, a Ron Paul second place finish in Iowa, or even a narrow win, isn’t at all beyond the realm of possibility.

Of course, it’s worth noting that the Iowa Caucuses don’t necessarily tell us much about the future. Of the six contested Iowa caucuses since 1976, the winner of the caucus has gone on to become the Republican nominee only three times (Ford in 1976, Dole in 1996, and Bush 43 in 2000) and only one of of those candidates has gone on to win the General Election. What Iowa has done for the GOP, though, is narrow the field. After Iowa and then New Hampshire in 1980, the Republican race was essentially a race between Ronald Reagan and George H.W. Bush. In 1988 it became a race between George H.W. Bush and Bob Dole. And, in 2000 it became a race between George W. Bush and John McCain, who had finished 5th. We could see a similar winnowing next year in that I think its likely that at least two candidates — Bachmann and Santorum — are likely to be close to dropping out of the race after what are likely to be disappointing performances in states that are make-or-break for both of them.

So where does that leave Paul? In about the position you’d expect, really. The most that a good performance on his part would do is embarrass Romney and give Gingrich momentum going in to New Hampshire where, according to a new Marist poll, Gingrich seems to be cutting in to Romney’s previously impenetrable lead. Paul is at a pretty respectable 16% in this poll, and there are some signs that his message is gaining traction in the Granite State, but harder for Paul to translate his base support enthusiasm in to votes in a state like New Hampshire where, despite its libertarian bent at times, independents are allowed to vote in primaries. After New Hampshire, the race moves on the South Carolina and Florida where Ron Paul is a non-entity in the polls so far and seems unlikely to benefit from the Cain departure.

So, yea, Ron Paul could do well in Iowa, and I expect you’ll be hearing a lot of chatter from the pundits about that over the next week or two. In the end, though, it strikes me that it would be his high watermark, much like Pat Robertson’s surprise second place showing in 1988 was his high watermark.