Tennessee revenuers are waiting at the borders to arrest people with cigarettes.

Starting [Thursday], state Department of Revenue agents will begin stopping Tennessee motorists spotted buying large quantities of cigarettes in border states, then charging them with a crime and, in some cases, seizing their cars.

The idea is for the monitoring agent to spot a person buying cigarettes in volume at an out-of-state market, then departing in a vehicle with Tennessee license tags. Starting today, monitoring agents spotting such a suspect will call an arresting agent who will stop the car when it enters Tennessee, he said.

Tennessee’s cigarette tax went from 20 cents per pack to 62 cents per pack effective July 1. All eight states that border Tennessee have lower tax rates, meaning smokers can save up to 45 cents per pack — $4.50 for a 10-pack carton — by purchasing out of state. The border states with the lowest cigarette taxes are Missouri with 17 cents and Mississippi at 18 cents. The highest is Arkansas with 59 cents. Kentucky and Virginia both tax cigarettes at 30 cents a pack, North Carolina at 35 cents, Georgia at 37 cents and Alabama at 42.5 cents.

Under state law, bringing more than two cartons of cigarettes into the state without paying Tennessee taxes is a “Class B” misdemeanor, carrying punishment of up to six months in jail and/or a $500 fine. Bringing 25 or more cartons is a “Class E” felony, with minimum penalty of one year in prison and a maximum of six years plus a fine of up to $3,000. In addition, the specific state statute dealing with untaxed cigarettes provides that vehicles used to transport more than two cartons “are considered contraband and are subject to seizure,” says a Department of Revenue statement.

Farr said that agents have been instructed to seize any vehicle carrying more than 25 cartons of cigarettes without Tennessee tax stamps. In cases where three to 24 cartons are involved, he said vehicle seizure is “at the officer’s discretion.”

How this can possibly be constitutional is beyond me. First, what gives Tennessee police officers the authority to operate across state lines? Second, surely seizing a vehicle potentially worth upwards of $40,000 for the “crime” of possessing more than two cartons of cigarettes amounts to excessive punishment under the 8th and 14th Amendments? [To say nothing, as Tennessean Don Sensing notes, of the Commerce Clause.]

When I lived in Chattanooga, I made it a point to fill up my tank in Georgia whenever I was there because that state’s much lower gasoline taxes saved me a substantial sum. Could Tennessee outlaw that? For that matter, when I lived in high sales tax states, I frequently bought expensive commodity items in neighboring municipalities that had lower local taxes. Could that be outlawed? (Technically, many states require people to pay them sales taxes for out-of-state purchases, whether online or in real space; they seldom try to enforce those laws, though.)

Ed Morrissey believes, “The notion that an American cannot cross a state border without risking arrest for purchasing a completely legal product for his own use should be anathema to everyone across the political spectrum.” Bruce McQuain, “Can’t wait for the court challenge on this one.”

John Cole doesn’t see what they’re so upset about, seeing as how both have supported the Bush administration’s use of Constitutionally dubious domestic surveillance methods to protect us from terrorists. Then again, there is a question of proportionality. One can support the death penalty for premeditated murder but not for failure to file one’s income taxes.

Creating an absurdly high set of penalties for non-criminal action and then assigning near-absolute discretion to agents on the enforcement side is a recipe for corruption. Like our speed limit laws, it turns honorable citizens into enemies of the police. Given that the state actually has legitimate laws that it can’t effectively enforce, and needs the cooperation of the citizenry to do so, it’s just incredibly dangerous. 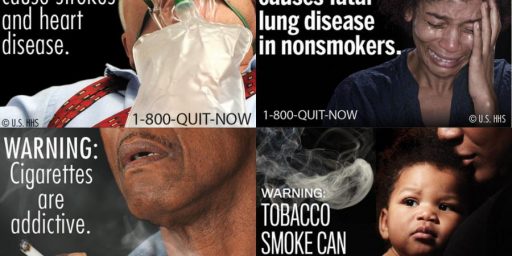