The Great Rubio Hope? Maybe, But He’ll Need To Show He Can Win First

Many analysts are making the argument that Marco Rubio is the GOP's best hope to win the General Election in 2016. That may be true, but before he can get there he needs to find a way to win the GOP nomination. 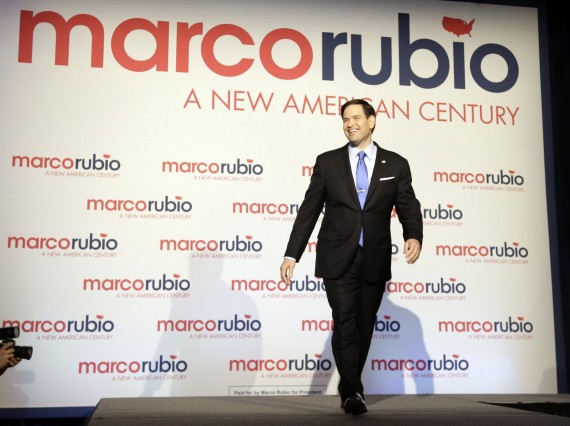 David Wasserman at FiveThirtyEight makes the case that Marco Rubio is the GOP’s best hope for winning the General Election in November:

If they nominate Ted Cruz, Clinton would probably win, the GOP Senate majority would also be in peril and GOP House losses could climb well into the double digits. A Donald Trump nomination would not only make Clinton’s election very likely and raise the odds of a Democratic Senate; it could force down-ballot Republicans to repudiate Trump to survive, increase pressure on a center-right candidate to mount an independent bid and split the GOP asunder.

In other words, if you’re a member of the Republican Party who wants to win in November, it’s basically Rubio or bust. The “Rubio or bust” theory relies on a process of elimination rather than an assessment of his biography, skills or ground game.

If anything, Rubio has plenty of general election upside.

It’s hard to imagine Clinton matching the share of Latino voters that Obama won in 2012, 71 percent, against a Spanish-speaking son of immigrants who supported a bipartisan immigration reform bill. It’s also hard to imagine Clinton matching Obama’s 60 percent among 18-to-29-year-olds against a candidate two decades younger than she is. Finally, unlike in 2012, Democrats wouldn’t have the luxury of portraying the GOP nominee as a corporate robber baron who has never walked in voters’ shoes.

The stark differences between the leading GOP contenders’ appeal in a general election mean that Republican chances in 2016 may not depend so much on Clinton’s popularity. It may be time for Republicans to be more concerned with their own candidates’ electability than Clinton’s favorability, which has slid markedly over the past year.

There’s more to Wassterman’s analysis in support of his conclusions about Rubio than can be fairly excerpted here, but to a large degree he makes a convincing argument. To be sure there are candidates with more executive experience than Rubio on the Republican ballot, such as Jeb Bush, John Kasich, and Chris Christie, but 2016 seems to be a year in which Republicans, like Democrats in 2008, aren’t necessarily very concerned with the level of political experience that their favored candidate has. If it were otherwise, then we wouldn’t be seeing candidates like Ted Cruz, who has been in the Senate for less time than Rubio and lacks his legislative experience, and Donald Trump, who has never held an elected or appointed government office in his lifetime, leading in the polls. Nor would we see Republicans flirting with a candidate such as Ben Carson or Carly Fiorina as they have at various points during this election cycle.

There is indeed a fairly good argument to be made that Bush, Kasich, or Christie would be a better General Election candidate for Republicans most concerned about winning an election against Hillary Clinton, but the poll numbers nationally, and in the early primary states like Iowa, New Hampshire, and South Carolina seem to tell us that none of these candidates would be likely to be able to attract enough support from the conservative wing of the Republican Party to not only win the nomination but also hold onto heading into the General Election even has they shift to the center to try to beat Clinton in purple states such as Ohio, Virginia, and Florida. Rubio, on the other hand, seems to be a candidate who can appeal to both the GOP’s conservative an establishment wings while at the same time having the potential to reach out to independent and Latino voters in sufficient numbers to be competitive enough to possibly win in the states that the GOP will need to capture in order to get to 270 Electoral Votes on Election Night.

There’s only one problem for the GOP, Marco Rubio doesn’t seem to be well=positioned at all to win the Republican nomination, or even be competitive past February barring breakthrough performances in one or all of the early states of which there’s at best only scant evidence at this point.

Rubio has a long history as a rising Republican star, of course. His unlikely challenge to then Florida Governor Charle Crist for the Republican nomination for an open Senate seat was opposed by many establishment Republicans but, thanks largely to his popularity with the growing Tea Party movement, Rubio was able to force Crist out of the race for the nomination to make an attempt to run as an independent. That run failed, of course, and Rubio walked into the Senate as one of the stars of the incoming class from the 2010 election and quickly became a media star. While the Senator lost much of his star power when he became part of the group that drafted the ill-fated Senate immigration reform plan in 2013, he fought hard to earn it back by becoming one of the party’s leading voices on foreign policy. His entry into the Presidential race, while unexpected given the fact that his mentor and close friend Jeb Bush was also running for the Republican nomination, seemed like the logical next step for a politician who had risen very quickly to the heights of political notoriety.

Unfortunately for Rubio, while his initial entry into the race did give him a bump in the polls, that bump faded quickly as time went on and faded even more once Donald Trump got into the race and the focus of the race on immigration policy reminded many Republicans that he had been on the “wrong” side of the debate just two years earlier. Starting in October, though, it began to appear that the junior Senator from Florida may be getting his much anticipated chance to rise in the ranks of Republican candidates. Thanks largely to a series of debate performances in which he was among the better spoken, better prepared candidates relatively speaking, Rubio slowly began to rise in the polls and to attract the attention of top Republican fundraisers while also earning the endorsement of many of his Senate colleagues. As I noted at the time, it seemed as though Rubio’s breakthrough moment had arrived.

That was three months ago, though, and Rubio doesn’t seem to have done much to exploit the chance he was given.

Last month, for example, it started to become apparent that Rubio’s campaign had decided to adopt a strategy that largely involved seemingly ignoring the early states in the race for the nomination in the apparent belief that they could still pull together a winning campaign elsewhere in the country regardless of how well they did in February. Not surprisingly, many Republican outsiders were skeptical of this strategy and seemed to hold off efforts to help Rubio’s campaign financially until it was clear that they were committed to putting together a strategy that would make Rubio a credible contender alongside Donald Trump and Ted Cruz. Now, the campaign says that it has a strategy that involves finishing third in Iowa, second in New Hampshire, and first in South Carolina, thus vaulting Rubio into contender status by the end of next month. While this isn’t an entirely absurd idea, as I noted earlier this month it’s hard to see exactly where the campaign is seeing the evidence that the momentum necessary for such a 3-2-1 strategy would materialize in the relatively short amount of time between Iowa and South Carolina. This was especially true given the fact that the polling at the time, and now, showed Rubio in a fairly distant third place behind Donald Trump and Ted Cruz nationally, as well as in Iowa, New Hampshire, and South Carolina. Perhaps most concerning, Rubio is not even able to average 15% support in his home state of Florida, where he also currently sits at third place behind the two Republican front runners.

This isn’t to say that everything looks glum for Rubio, of course. He did get the endorsement of the Des Moines Register over the weekend, and there have been at least some signs in recent polling that he is moving up in the polls, albeit very, very slowly. That’s why tonight’s debate may well be crucial for Rubio going forward. If he can make a case to voters, including those who are saying they support candidates like Cruz and those who say they’re backing the other “establishment” candidates such as Bush, Christie, and Kasich, then he may have a chance to pull off surprises in Iowa and/or New Hampshire that will give his candidacy credibility going forward. If he can’t do that, though, then his campaign could quickly fade as money dries up, the front runners move forward, and Republicans either look elsewhere for a champion.

Marco Rubio, then, may be the GOP’s best hope in 2016, but before he gets there he needs to overcome a lot of doubts.