The Party of Reagan on Immigration

A 1980 debate between Ronald Reagan and George H.W. Bush shows a different GOP. 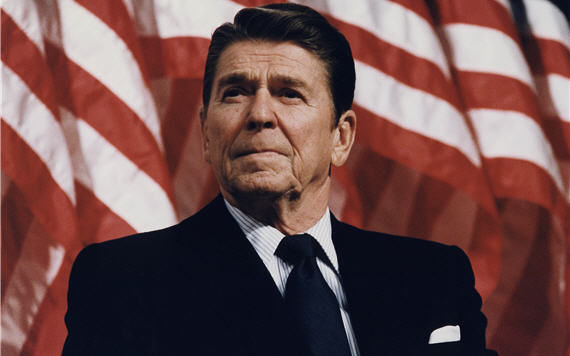 In a Daily Beast essay on why Hillary Clinton’s strategy of laying low while her opponents take shots at her is “actually brilliant” (he’s right), Nick Gillespie points a posting by his Reason colleague Jesse Walker on how much the Republican Party has changed on immigration policy since the days of Ronald Reagan.

Three and a half decades ago, Republican rhetoric about the border sounded rather different than it does today. From April 23, 1980, here’s Ronald Reagan and George H.W. Bush discussing illegal immigration at a debate before the Texas presidential primary:

AUDIENCE QUESTION: Do you think the children of illegal aliens should be allowed to attend Texas public schools free, or do you think that their parents should pay for their education?

BUSH: Look, I’d like to see something done about the illegal alien problem that would be so sensitive and so understanding about labor needs and human needs that that problem wouldn’t come up. But today, if those people are here, I would reluctantly say I think they would get whatever it is [that] society is giving to their neighbors. But it has— the problem has to be solved. The problem has to be solved. Because as we have kind of made illegal some kinds of labor that I’d like to see legal, we’re doing two things, we’re creating a whole society of really honorable, decent, family-loving people that are in violation of the law, and secondly we’re exacerbating relations with Mexico.

The answer to your question is much more fundamental than whether they attend Houston schools, it seems to me. If they’re living here, I don’t want to see…six- and eight-year-old kids being made, one, totally uneducated, and made to feel like they’re living outside the law. Let’s address ourselves ot the fundamentals. These are good people, strong people. Part of my family is Mexican.

REAGAN: Could I add to that? I think the time has come that the United States, and our neighbors, particularly our neighbor to the south, should have a better understanding and a better relationship than we’ve ever had. And I think that we haven’t been sensitive enough to our size and our power. They have a problem of 40 to 50 percent unemployment. Now this cannot continue without the possibility arising—with regard to that other country that we talked about, of Cuba and what it is stirring up—of the possibility of trouble below the border. And we could have a very hostile and strange neighbor on our border.

Rather than talking about putting up a fence, why don’t we work out some recognition of our mutual problems? Make it possible for them to come here legally with a work permit, and then, while they’re working and earning here, they’d pay taxes here. And when they want to go back, they can go back. They can cross. Open the borders both ways.

The Supreme Court would render the question moot in 1982, ruling that the Equal Protection Clause of the 14th Amendment required exactly what Reagan and Bush said that decency required. Reagan would go on to sign the Simpson-Mazzoli Act in 1986, legalizing seasonal farm workers and granting amnesty and a path to citizenship to some four million immigrants who were in the country before 1982.

What’s notable here is that both men not only instinctively understood the politics of insulting millions of people who had come to improve the lives of their family (or were simply dragged along by parents trying to improve their lives) but also the human decency of taking care of children, regardless of their legal status. Moreover, they understood that the real problem to be addressed wasn’t people crossing the border illegally but the prospect of a failed state below that vast border.

In an insightful essay in the June 1998 issue of The Atlantic Monthly, Christopher Caldwell argued that “The Southern Captivity of the GOP” was rendering the party “obsolescent.”

The party faces a crisis of confidence that has many symptoms — repudiation in the most sophisticated parts of the country, widespread distrust of the Republican leadership, an inability to speak coherently on issues. All of them grow out of the same root cause: a vain search to rediscover the formula that made that unformulaic President, Ronald Reagan, so broadly appealing — even beloved. Congressional Republicans triumphed decisively in 1994 on such Reaganite issues as free trade, welfare reform, and shrinking the government. But thanks to a deficit-dissolving economy and a dwindling memory of the Cold War, those issues were of declining importance even then, and they have given way to a bipartisan consensus. “Consensus,” of course, is only another way of describing the issues that have been taken off the table. What remains for the party to talk about? On first thought, not much. The Republican strategist Ed Gillespie says, “We’re like the dog that caught the bus.”

Now that there is no longer any force on the political landscape to challenge their general principles, the Republicans are clinging to power, even as they grow confused about what exactly they are supposed to do with it.

What especially struck me at the time was this analysis:

[In the 1996 presidential election] the Republicans lost heavily among Hispanics, America’s fastest-growing voting bloc, who added 1.5 million voters from 1992 to 1996, and will probably add as many again by the next presidential election. This alarming result confounded an earlier Republican optimism. Democrats who had arrogantly assumed that standard-issue minority politics would easily pull Hispanics into the party fold were proved wrong throughout the 1980s. Hispanic voters turned out to be disproportionately entrepreneurial and disproportionately receptive to Republican family-values rhetoric, and gave the party roughly a third of their votes in the three presidential elections from 1980 to 1988. Leaving aside Puerto Ricans and Dominicans in New York, who do fit the Democrats’ minority paradigm, the Republicans were doing better with the Hispanic vote than might be expected.

But the Republicans in the 104th Congress tried to shore up their Texas and California right wings with hostile rhetoric on immigration. They passed legislation that sought to deprive not just illegal but also legal immigrants of federal benefits. (Newt Gingrich and other Republicans backpedaled in 1997, reversing some of the measures, but the damage was done.) And California’s Proposition 187, supported by Republican Governor Pete Wilson and aimed at denying benefits to illegal immigrants, brought angry Hispanics to the polls in unprecedented numbers. Clinton took 72 percent of the Hispanic vote nationwide, including 81 percent in Arizona and 75 percent in California; he took 78 percent of Hispanics under thirty. He nearly split the Hispanic vote even in Florida, where 97 percent of the Cuban population voted for Reagan in 1984.

The hardening loyalty of Hispanics is a catastrophe for the Republicans’ presidential prospects. According to census projections, by 2025 the country’s two most populous states, California and Texas, will be 43 and 38 percent Hispanic respectively. And earlier in the decade California was hemorrhaging Republicans anyway, owing to what could be called the Fuhrman effect: a large secondary migration of older, middle-class whites who appear to have lost patience with the multiracial, multicultural society already in evidence in the state, and have moved to Idaho, Nevada, Arizona, and other more solidly Republican states of the intermountain West.

Younger readers may not recall that California had been a solid Republican state at the presidential level. With the exception of the Goldwater debacle in 1964, the GOP carried the state in every election from 1952 to 1988. Nixon carried it three times and Reagan won it twice. Bush the Elder won it in 1988. Bill Clinton reversed the tide in 1992 and the Democrats have held it, usually by wide margins, ever since.  So long as the GOP doubles down on the Prop 187 message, it’ll never be competitive there.

There is a big problem with having a southern, as opposed to a midwestern or a California, base. Southern interests diverge from those of the rest of the country, and the southern presence in the Republican Party has passed a “tipping point,” at which it began to alienate voters from other regions.

As southern control over the Republican agenda grows, the party alienates even conservative voters in other regions. The prevalence of right-to-work laws in southern states may be depriving Republicans of the socially conservative midwestern trade unionists whom they managed to split in the Reagan years, and sending Reagan Democrats back to their ancestral party in the process. Anti-government sentiment makes little sense in New England, where government, as even those who hate it will concede, is neither remote nor unresponsive.

The most profound clash between the South and everyone else, of course, is a cultural one. It arises from the southern tradition of putting values — particularly Christian values — at the center of politics. This is not the same as saying that the Republican Party is “too far right”; Americans consistently tell pollsters that they are conservative on values issues. It is, rather, that the Republicans have narrowly defined “values” as the folkways of one regional subculture, and have urged their imposition on the rest of the country. Again, the nonsoutherners who object to this style of politics may be just as conservative as those who practice it. But they are put off to see that “traditional” values are now defined by the majority party as the values of the U-Haul-renting denizens of two-year-old churches and three-year-old shopping malls.

If anything, the problem has grown worse in the subsequent seventeen years. For one thing, Hispanics now make up a whopping 17 percent of the population. For another, the country has grown far more liberal on key social issues, with the South fighting tooth and nail. And because the combination of concentration of voters, perfection of partisan gerrymandering, and greater propensity to vote among its demographic groups allows the GOP to hit above its weight in Congressional and midterm elections, the party’s leadership can deny that they have a problem.

The cultural wars will likely never end but the key battles of the 1970s, 1980s, and 1990s have mostly been lost by the South. School prayer and flag burning have long been off the radar screen. Women are commanding battleships and piloting fighter jets; a handful have now moved on to the Mountain Phase of Ranger School. Not only are gays openly serving in the military but they’re marrying other gay soldiers and getting full benefits. And, seemingly out of nowhere, the Confederate battle flag is being stripped not only from capital flagpoles but Walmarts and the tops of Dodge Chargers.

Even more than 1998, then, the Republican Party needs a new message. Reagan’s platform on tax cuts and military spending was so popular that the Democrats co-opted it; we’re now just haggling at the margins. Reagan’s rhetoric on abortion and other social issues—which was mostly that, with little policy energy behind it—is now decades out of phase with reality. And, as demonstrated, Reagan’s message on immigration and border policy would be most welcome in 2015.

As Gillespie details in his piece, Hillary Clinton is shrewdly letting Bernie Sanders and others pander to the Democratic base while keeping her eyes on the real fight with the Republican Party. We’ll see if Jeb Bush, John Kasich, and others from the more moderate wing of the GOP can demonstrate similar discipline and still win the nomination. A candidate who appeals only to elderly white Southerners has no chance of beating Clinton.