Forget about Congress, the real story going forward is likely to be Republican dominance of state legislatures nationwide. 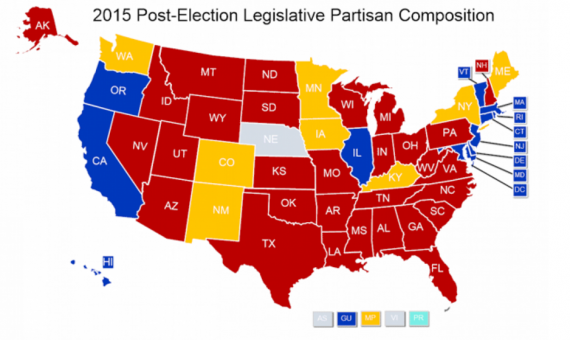 Chris Cillizza notes that Tuesday’s election results have helped add to the Republican Party’s extraordinary control over state legislatures across the United States:

The 2015 election is over. (You may not have known it was even happening.)  And it proved one thing: Republicans have an absolute stranglehold on governorships and state legislatures all across the country.

* With Matt Bevin’s win in Kentucky on Tuesday night, Republicans now hold 32 of the nation’s governorships — 64 percent of all the governors mansions in the country. (One race, in Louisiana, won’t be decided until next month. Democrats believe they have a good chance of winning that race against now-Sen. David Vitter.)

* Democrats’ failure to take over the Virginia state Senate means that Republicans still hold total control of 30 of the country’s 50 state legislatures (60 percent) and have total or split control of 38 of the 50 (76 percent.)

That dominance — and what it means to the policy and political calculations and prospects for both parties at the national level — is the single most overlooked and underappreciated story line of President Obama’s time in office. Since 2009, Republicans have made massive and unprecedented gains at the state level, gains that played a central role in, among other things, handing control of the U.S. House back to the GOP in the 2010 election.

The dominance that Cillizza speak of can be seen in the map that accompanies his post, which is at the top of this post. All of the states colored in red are, of course, states where the GOP controls both houses of the state legislature, while the states in blue are the ones where Democrats dominate. The states in yellow are those in which control of the legislature is split between the parties with one controlling each chamber. Nebraska, of course, is gray because its unicameral legislature is formally nonpartisan although the actual membership is dominated by members affiliated with the Republican Party. In four states where Democrats have control of both houses of the state legislature, consistent of Illinois, Maryland, Massachusetts, New Jersey, there is a Republican Governor, while the remaining states that have full Democratic control also have a Republican Governor. There are Democratic Governors, meanwhile, in six states (Missouri, Montana, New Hampshire, Pennsylvania, Virginia, and West Virginia) there is a Democratic Governor with a fully Republican legislature while the remaining states with fully Republican control have a Republican Governor, with the exception of Alaska. which has an Independent Governor. Among the eight split states, five states have Democratic Governors and split control of the legislature and the remaining three have a Republican control. Matt Bevin’s election in Kentucky will change the balance in this category to four for each party. Additionally, while Louisiana’s will remain in Republican control, that state’s Governor’s race won’t be decided until later this month in the runoff between Republican David Vitter and Democratic Candidate John Bel Edwards, so that states status could ch (Source)

The significance of this much Republican dominance at the state level cannot really be understated. It gives Republicans the ability to push through legislation that obviously otherwise would not get through Congress on a whole host of hot button issues ranging from abortion rights to election law changes such as Voter Identification laws and other provisions that have been the subject of litigation for several years now, and is likely to do so for years to come. Depending on how the states handle the judiciary, it potentially gives the party significant control over shaping the judiciary at the state level for years to come. When the 2020 Census is completed, this dominance, which seems likely to continue for the most part for several more years, could give Republicans significant control over redistricting just as it did in the wake of the 2010 elections, something that will have a significant impact on the composition of the House of Representatives starting in 2022 and beyond. Perhaps even more important than that, though, this kind of control gives the party a potentially deep bench from which to recruit candidates for Congress not only to challenge vulnerable Democrats but also to succeed Republicans who may end up retiring. In short, the fact that the Republican Party has such extensive control of state legislatures at this point is just as important as their control of both Houses of Congress, if not more important given the wide-ranging implications that control is likely to have going forward.

If nothing else, information like this emphasizes the fact that the focus that political pundits and the political media place on national politics to the often complete exclusion of state-level politics is often a case of seeing the forest, but missing the trees. Certainly, what happens at the national level both in Congress and with respect to the Presidency and the Federal Judiciary is profoundly important because of the extent that it impacts all of us regardless of where we live. It’s worth keeping in mind, though, that state-level politics is important as well even though it typically only gets national attention when something extraordinary happens. Keeping up with what’s going on at the state level is thus a bit hard than it is for national news, but there are some resources worth taking a look at if you’re interested in what’s going on in your state or others. The Washington Post’s The Fix blog has occasionally compiled a list of the best state-level political bloggers, although the current list appears to be about two years old. Nonetheless, while I can’t speak for the lists from other states, the list for Virginia is a fair representation of the best political bloggers in the state from both sides of the aisle. Earlier this early this year, they also compiled a list of the Twitter feeds of the top political reporters in all fifty states. (If anyone is aware of a more up-to-date list of state-level political bloggers, feel free to share it in the list.) It also points out the importance of voters at least making an effort to pay attention to the issues impacting elections at the state level as much as they do for Federal elections, if not more so. Given the way that state legislatures help set the national agenda and frames the term of national debate, and the fact that they often serve as a feeder or “minor league” system for Congress, this is probably something we should be paying more attention to.