John Sides argues that, contrary to popular conception, undecided voters are neither morons nor non-partisan.

John Sides argues that, contrary to popular conception, undecided voters are neither morons nor non-partisan.

Several of the questions from last night’s debate led commentators to joke about whether the participants were truly “undecided voters,” as they were billed.  Jonathan Chait, for one, says that “Obama enjoyed friendly questions from an audience that obviously leaned left.”

It’s important to remember that undecided voters—at least as best we can identify them—are mostly composed of partisans.

One of the stupider things that people say about undecided voters is that they’re stupid.  But although they may follow politics less closely than other voters, they’re not somehow devoid of values, beliefs, and attitudes that bear directly on politics.  So we shouldn’t be surprised that last night’s questions were something more than anodyne, and may have reflected honest and meaningful opinions.

Sides points us to a piece by political scientists Larry Bartels and Lynn Vareck in the NYT:

These 592 undecided voters differ from those who have made up their minds (or are at least leaning one way or the other) in some unsurprising ways. For example, they are rather less knowledgeable about politics, and much more likely to say they follow news and public affairs “only now and then” or “hardly at all.” (Almost 40 percent are unsure which party currently has more members in the House of Representatives, and another 20 percent wrongly answered that it was the Democrats.) They are also considerably less likely to identify themselves as Republican or Democratic partisans, and less likely to call themselves liberals or conservatives (69 percent  say they are moderates or not sure).

These differences may seem to confirm the common stereotype of undecided voters as “a group of people that have virtually no partisan or ideological attachments, pay very little attention to politics, and often create the crazy swings we see in the horse race polls,” as Jay Cost of The Weekly Standard put it recently. But that stereotype turns out to be quite wrong in some important ways.

For example, despite the marked overrepresentation of independents among undecided voters, most undecided voters are not independents. The accompanying figure shows the distribution of party identification among our 592 undecided voters, as recorded in a C.C.A.P. baseline survey conducted with the same people in late 2011. Only three in ten were “pure” independents (those who denied leaning toward either party), while another 7 percent said they were not sure about their party identification. Four in ten were Democratic identifiers or leaners, while the remaining 23 percent  were Republican identifiers or leaners. 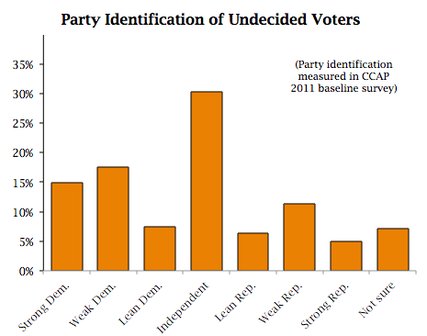 There’s a lot more to the piece but, essentially, most undecided Democrats are people who have serious misgivings about President Obama whereas most undecided Republicans are those, like myself, who have strong reservations about the party’s social agenda.

I’m not sure that people who are unenthusiastic about the political party that they nonetheless always vote for are best described as “undecided.” And, certainly,  the debate commission certainly didn’t set up a format in which undecided voters asked questions of the candidates with the intention of packing the room with disaffected Democrats that wish Obama were more liberal or would fight Republicans more vigorously.

Perhaps we should distinguish between political independents—those who genuinely have no partisan preference—and undecided voters. But the people Bartels and Vareck describe are mostly what we have typically called “leaners” in past cycles: people who almost always vote for the candidates of one party but are, for whatever reason, reluctant to identify themselves as members of that party.

As to Sides’ contention that saying undecided voters are stupid is stupid, well, I’ll need more evidence. Certainly, the questions that we get from their representatives at these town hall debates every four years weighs in our favor. 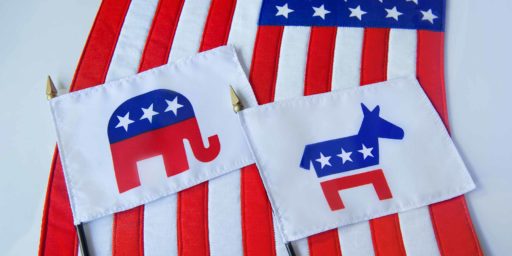 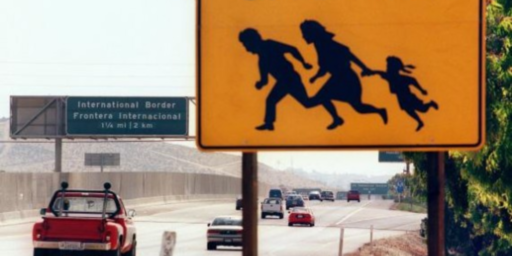