Following yesterday's move by Dick's Sporting Goods, Walmart has raised the age for all gun sales to 21. 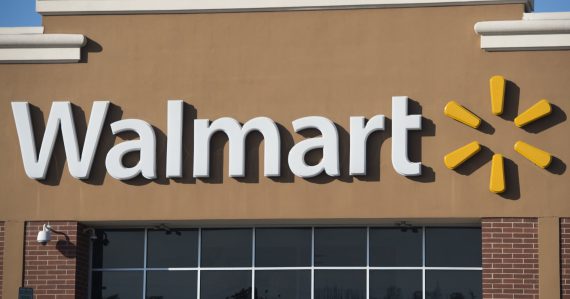 One day after Dick’s Sporting Goods announced that it would remove “assault weapons” from its stores and raise the age on all gun sales to 21 regardless of the applicable law in a given state, Walmart announced that it too would be raising the minimum age for gun purchases:

The world’s largest retailer, Walmart, announced a change to its policies Wednesday, saying it would raise the minimum age required to buy a firearm and ammunition and remove any items that resemble assault rifles from its shelves.

In a statement, the company said it would raise its age requirement to 21 from 18, a decision it made ”in light of recent events” — most notable the national discussion about gun control since the Feb. 14 shooting at a high school in Florida that left 17 people dead.

“We take seriously our obligation to be a responsible seller of firearms and go beyond Federal law by requiring customers to pass a background check before purchasing any firearm,” the company said.

The move is the latest by a private company to address increasingly loud grievances about the availability of guns in the absence of meaningful legislative action. Earlier in the day, Dick’s Sporting Goods, announced that it would stop selling assault rifles and high-capacity magazines and raise the minimum age it requires to buy a gun to 21.

The suspect in the Parkland, Fla., shooting purchased a gun legally at Dick’s in November, officials said. But the AR-15 used in the shooting had been purchased at another store, raising questions about the efficacy of policy changes at individual stores and chains.

Though Walmart had stopped selling assault rifles in 2015, it said it would now also remove guns that resemble such weapons from its website, such as airsoft guns and toys.

Gun control has been a topic of public discourse after every mass shooting. But the bloodshed at Marjory Stoneman Douglas High School in Parkland and the persistent and organized rallies by student survivors have reinvigorated the debate over whether guns should be more thoroughly regulated nationwide.

Public backlash against the NRA has been building as well. More than a dozen companies, including United Airlines, Delta, Best Western and MetLife, have cut corporate discounts and other perks for NRA members since the shooting.

As Derek Hawkins at The Washington Post notes, this move by America’s largest bricks and mortar retailer has come after years on which it has wobbled to some extent on the issue of gun sales:

Sam Walton, the founder of Walmart, was big on guns. An avid hunter, he opened his flagship store in Bentonville, Ark., specifically so he could be close to his in-laws’ quail hunting ranch. Remington shotguns were his favorite, as Field and Stream once noted. He was such a devout fan that the gun maker issued a commerative model in his name after he died.

Firearms, in turn, have long made up a key part of Walmart’s business. In addition to being the world’s largest retailer, Walmart is often referred to as the world’s largest gun retailer. But its relationship with firearm sales has been fickle in the 25 years since it made the landmark decision to stop carrying handguns. As economic and political winds have shifted, so have Walmart’s gun policies, though the general trend has been toward more restrictions.

On Wednesday, Walmart said it would raise the minimum age to buy a firearm or ammunition from 18 to 21 and remove products resembling assault-style rifles, like airsoft guns and toys, from its inventory, as The Washington Post reported. The company said in a statement that it made the decision “in light of recent events” — an inescapable reference to the recent mass shooting at a Parkland, Fla., high school that left 17 people dead.

It was an unusual acknowledgment from Walmart, which has often attributed its changing positions on gun sales to market factors, even when other issues are present.

Walmart was late to the game in 1993 when it decided to stop selling handguns. Other major retailers such as Sears and J.C. Penny had pulled firearms from their shelves years earlier, as the New York Times reported at the time.

Though the stores continued to carry shotguns and rifles, some worried that the move would erode the legacy of Walton, who died the previous year. “It was something Sam liked, a reflection of him, and they will look at it as taking something away from the tradition of Walmart,” Walter F. Loeb, president of Loeb Associates Inc., a retail consulting firm, told the Times.

Another major move came in 2006, when Walmart announced it would stop selling firearms entirely at all but a third of its American stores, which then numbered around 3,000. Again, the company said the decision was market-driven, citing “diminished customer relevancy” in the suburban and urban areas where Walmart was expanding. And again, hunting and firearms enthusiasts voiced concerns that the company was drifting away from its outdoorsy roots, as the Associated Press noted.

Just two years later, Walmart made it harder to buy firearms at the stores that were still selling them. The company signed on to a plan led by then-New York Mayor Michael Bloomberg that created a computerized log of purchases, introduced stringent inventory controls and set up systems to film every firearm sale. The Bloomberg-backed news website the Trace, which covers guns in America, says the move made Walmart’s policies tougher than the federal government’s background checks.

But when the economic recession took hold in 2009, Walmart’s sales slumped. And after a five-year hiatus at most of its locations, the company started quietly filling up shelves with shotguns, rifles and ammunition, as the Wall Street Journal reported in 2011.

It was part of a larger push to bring back “heritage categories” like sewing and outdoors equipment after Walmart’s attempts to carry more “upscale” products backfired, according to the Journal. Gun sales were also on the rise at that time, driven in part by fears of regulation by a Democratic administration. Half of Walmart’s nearly 4,000 stores, including some in urban areas, started selling firearms again.

In 2012, after the mass shooting in Newtown, Conn., Walmart resisted calls to stop selling assault-style rifles such as the Bushmaster AR-15, which gunman Adam Lanza used to massacre children and teachers at Sandy Hook Elementary School. But the company did remove a listing on its website for the weapon out of sensitivity for the victims, a spokesman told CNN at the time. Meanwhile, in the weeks after the attack, semiautomatic rifles sold out at Walmart locations around the country. The company even had to ration ammunition sales after President Barack Obama’s reelection.

Eventually, Walmart did stop selling the Bushmaster and other “assault weapons” in its store, an announcement it made seemingly out of the blue in 2015 that didn’t appear to coincide with any individual mass shooting event or a public relations campaign by gun control advocates. It did, however, come after the incident outside Roanoke, Virginia that month that resulted in the on-air death of a reporter and her cameraman, though the weapon used in that case was a handgun rather than an “assault rifle.” That means that, at this point, the only weapons that are generally available for sale at Walmart appear to be shotguns, standard hunting rifles, which are also “semi-automatic” like a so-called “assault weapon” but lack the cosmetic and other features that distinguish a gun like an AR-15 from such weapons, and some kinds of handguns. As with the policy change announced by Dick’s, Walmart’s change also applies to the sale of ammunition for any kind of gun.

As I noted yesterday, the Walmart announcement comes just over two weeks after the shooting at Marjory Stoneman Douglas High School in Parkland, Florida that left seventeen students dead. It also comes amid a public relations campaign that has mostly been aimed at companies that have affiliations with the National Rifle Association. As a result of that campaign, dozens of companies have ended referral programs or discount offers that were available to NRA members, this has primarily included airlines and hotel chains that offered discounts to NRA members either at any time of year or as part of a flight to wherever the annual NRA convention happens to be in a given year. Additionally, several insurance companies that either offer discounts to NRA members or, in some cases, underwrote the policies that the NRA offered to individual gun owners and school districts to cover allowing teachers and other civilians to carry weapons on campus has announced that they would no longer offer the policies. While some of these companies have faced blowback from conservatives and gun rights supporters for their decision, it does not appear to be a very large backlash at this point and it seems clear that these companies believe that these companies believe that, in the long run, responding positively to pressure on issues that polling currently shows most Americans agree is not going to cost them many customers and may actually gain them more foot traffic and sales then they’d otherwise get.

Update: Kroger has joined Dick’s and Walmart to announce that it will no longer sell guns to anyone under 21 at it’s “Fred Meyer,” stores. These stores are located in Washington, Oregon, Idaho, and Alaska. The chain had previously stopped selling “assault style” weapons in Washington, Oregon, and Idaho and also announced today that it would stop accepting special orders for these types of weapons to its locations in Alaska.

Update #2: L.L. Bean has also raised the minimum age to purchase a gun to 21.

FILED UNDER: Economics and Business, Guns and Gun Control, US Politics