Why Islam is Disrespected

Jeff Jacoby offers a harsh dose of reality in explaining why Islam is held in lower regard than the other major religions by Westerners.

Why Islam is disrespected (Boston Globe)

It was front-page news this week when Newsweek retracted a report claiming that a US interrogator in Guantanamo had flushed a copy of the Koran down a toilet. Everywhere it was noted that Newsweek’s story had sparked widespread Muslim rioting, in which at least 17 people were killed. But there was no mention of deadly protests triggered in recent years by comparable acts of desecration against other religions.

No one recalled, for example, that American Catholics lashed out in violent rampages in 1989, after photographer Andres Serrano’s ”Piss Christ” — a photograph of a crucifix submerged in urine — was included in an exhibition subsidized by the National Endowment for the Arts. Or that they rioted in 1992 when singer Sinead O’Connor, appearing on ”Saturday Night Live,” ripped up a photograph of Pope John Paul II.

There was no reminder that Jewish communities erupted in lethal violence in 2000, after Arabs demolished Joseph’s Tomb, torching the ancient shrine and murdering a young rabbi who tried to save a Torah. And nobody noted that Buddhists went on a killing spree in 2001 in response to the destruction of two priceless, 1,500-year-old statues of Buddha by the Taliban government in Afghanistan.

Of course, there was a good reason all these bloody protests went unremembered in the coverage of the Newsweek affair: They never occurred.

Christians, Jews, and Buddhists don’t lash out in homicidal rage when their religion is insulted. They don’t call for holy war and riot in the streets. It would be unthinkable for a mainstream priest, rabbi, or lama to demand that a blasphemer be slain. But when Reuters reported what Mohammad Hanif, the imam of a Muslim seminary in Pakistan, said about the alleged Koran-flushers — ”They should be hung. They should be killed in public so that no one can dare to insult Islam and its sacred symbols” — was any reader surprised?

Sadly, no. Now, granted, Christians and Jews have certainly committed plenty of violence in the name of their religions. But modernity hit the West centuries ago. We’re still waiting for it to hit the Dar al Islam. 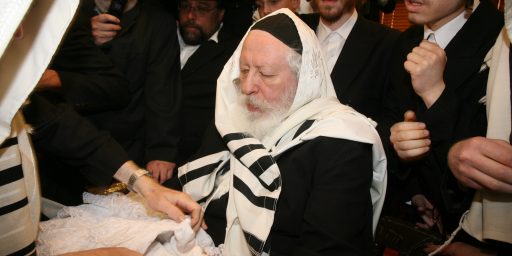