Bill Clark, who served as National Security Advisor and Interior Secretary under Ronald Reagan, has died at 81. 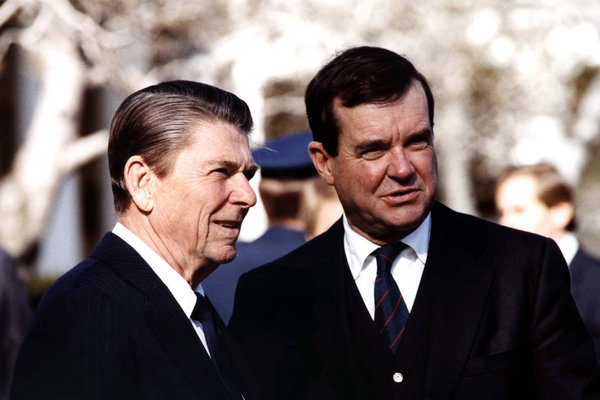 Bill Clark, who served as National Security Advisor and Interior Secretary under Ronald Reagan, has died at 81.

William P. Clark, who as one of President Ronald Reagan’s most trusted advisers successfully nudged him toward more hard-line positions on military spending, arms control and involvement in Central America, died on Saturday at his ranch near Shandon, Calif. He was 81.

The cause was complications of Parkinson’s disease, his son Paul said.

During Reagan’s first term, Mr. Clark — who served as deputy secretary of state, national security adviser and secretary of the interior — was understood to be pre-eminent among presidential aides. Time magazine called him the second most powerful man in the White House.

Some of his influence came from his deep knowledge of Reagan over the years. He realized that the president responded to visual aids, particularly films, more than written reports. So he showed him Defense Department films about the Soviet threat, the Middle East and other international issues in the White House theater, Lou Cannon reported in “President Reagan: The Role of a Lifetime” (1991).

As national security adviser from January 1982 to October 1983, Mr. Clark was among the administration’s most forceful advocates for accelerating United States military involvement in Central America, warning that countries in that region could fall to communism like dominoes without American assistance. He urged the administration to make no concessions to Moscow on arms control, and later attributed the fall of European communism to this tough stance. His belief in “peace through strength” prompted him to advocate higher military spending.

In 1982, in a speech at Georgetown University, Mr. Clark said the United States “must be prepared to respond vigorously to opportunities as they arise and to create opportunities where none existed before.” Tass, the Soviet news service, denounced the speech as warmongering.

Mr. Clark moved from the No. 2 job in the State Department to the national security post after his predecessor, Richard Allen, resigned in January 1982. When Reagan announced his appointment, he promised the job would be upgraded with a “direct reporting relationship to the president.” The Times said Mr. Clark used this access to become the administration’s “most influential foreign policy official.”

Newsweek said he had returned the role of security adviser to the “lofty status” it had under Henry A. Kissinger in the Nixon administration.

After Interior Secretary James G. Watt was forced to resign after a joke that simultaneously managed to offend blacks, women and the disabled, Mr. Clark volunteered to take the job. Starting in November 1983, he was credited with polishing the agency’s tattered image. He stayed in the post for the rest of Reagan’s first term.

William Clark, who attended Roman Catholic schools, went to Stanford, but left to study for the priesthood at the Augustine Novitiate in New Hamburg, N.Y. Only two hours of speech were permitted each day. After a year, he briefly returned to Stanford, then moved on to the University of Santa Clara, but did not graduate.

He then attended Loyola Law School in Los Angeles, but was drafted into the Army in 1953 and spent two years as a counterintelligence agent in Germany. He returned to law school as a night student while working as an insurance adjuster. He did not finish but, studying on his own, passed the California bar exam in 1958 and helped establish a private law firm.

His clout derived not from expertise or longevity but from the personal affinity and basic values he shared with the president. The two men believed fervently in the virtues of small government, military might and anti-Communist resolve — and in the transcendent pleasure of horseback riding.

Before assuming his State Department post, Mr. Clark endured criticism for his performance in Senate confirmation hearings in which he admitted that he did not know such information as the names of key African heads of state. When he first reported to Haig, the Army general was said to have told him: “You, Bill, are going to run the building. I’m going to run the world.”

But Mr. Clark — a rancher who passed the California bar examination on his second try and without graduating from college or law school — earned the esteem of Haig and other officials who valued his loyalty to the president and his tireless efforts to learn what he did not know.

Steve Metz observes on his Facebook page that “Who was the last National Security Adviser who was not a college graduate?’ would make a good trivia question. Indeed, I’d not have guessed.

Reagan used to remark on his own lackluster academic career as a C student at tiny Eureka College, “Just think how far I might have gone had I applied myself.” The same, it seems, was true of his most trusted aide.