The state is voting during the high point of a global pandemic because Republicans forced it.

Every other state that was scheduled to vote today postponed their election. Wisconsin didn’t until the 11th hour and the state supreme court reversed that. Meanwhile, the US Supreme Court has weighed in.

The ruling came after the GOP-controlled state legislature challenged Evers’ order. The state Supreme Court split 4-2 along ideological lines, with Justice Daniel Kelly, who is up for reelection in Tuesday’s balloting, abstaining.

Evers — who had previously maintained that he alone did not have the authority to postpone an election — issued his order seeking to push back the elections on Monday, saying that he was acting to reduce exposure to the virus and ease concerns among his constituents about the spread of the pandemic. Evers issued a stay-at-home order last month as part of his administration’s efforts to fight coronavirus.

The election absolutely should have been postponed. But doing so on the day before the election just added to the confusion already surrounding the contest (more on that shortly). And, rather obviously, given that the election date is set in law, the governor needed to have done so in conjunction with the legislature.

Alas, the legislature had no interest in going along:

Evers had called the state legislature back for a special session and asked them to act to postpone the election on Friday. The GOP-controlled legislature declined to do so, gaveling in and out of sessions in a matter of minutes on Saturday and earlier on Monday.

Republican legislative leaders in Wisconsin argued that the election had to go forward, though local officials across the state have pleaded for in-person voting to be shut down.

“There’s no question that an election is just as important as getting take-out food,” Vos and Fitzgerald said in a joint statement on Friday, after Evers called for the special session. “Our Republic must continue to function, and the many local government positions on the ballot must be filled so that municipalities can swiftly respond to the crisis at hand.”

People have to eat on a daily basis. Voting is a rare occasion and primary elections, in particular, are very fluid. Not to mention that it’s a hell of a lot easier to social distance when picking up take-out than when voting.

Particularly when most of the voting locations are shut down. As Vox’s Ian Millhiser wrote before the ruling came down,

With the coronavirus pandemic raging, most poll workers had refused to work Tuesday’s election, leading Evers to call up the National Guard in order to staff the polls. But this stopgap measure appears to have done little to prevent mass poll closures. In Milwaukee, for example, local election officials announced that there would be only five polling locations open — instead of the typical 180.

Meanwhile, about 50,000 Milwaukee residents are expected to attempt to vote in person, or about 10,000 per voting site. That means that each of these polling sites could potentially become a vector for the spread of Covid-19.

State officials were also overwhelmed by a crush of absentee ballots. In a typical spring election, no more than 250,000 voters request absentee ballots in Wisconsin. This time, over 1.1 million voters have sought such ballots, and that’s created a logistical nightmare of its own.

Wisconsin has struggled to mail out these ballots fast enough for voters to actually use them, and tens of thousands of voters are not expected to receive their ballots until after the April 7 election day has passed. With so many voters facing disenfranchisement through no fault of their own, federal Judge William Conley ordered the state to extend the deadline for mailed-in ballots by six days. But that ruling was overturned by the Supreme Court.

But, an hour after the Wisconsin supremes ruled that the election must go on, the US high court threw another wrench into the gears.

The Supreme Court voted 5-4 on Monday to reverse an order extending the absentee ballot deadline for voting in the Wisconsin elections scheduled for Tuesday, stepping into a back-and-forth between Democrats and Republicans in the state over when voting would take place.

In an unsigned order from which the court’s four liberal justices dissented, the court did away with the extension.

The top court’s five Republican-appointees, none of whom attached their name to the court’s order, reasoned that extending the date by which voters could mail absentee ballots “fundamentally alters the nature of the election.”

The order from the Supreme Court puts a heavy emphasis on the fact that the date for the ballots to be postmarked — not just received by elections officials — had been extended. That remedy went beyond what Democrats had even sought, the court wrote.

“By changing the election rules so close to the election date and by affording relief that the plaintiffs themselves did not ask for in their preliminary injunction motions, the District Court contravened this Court’s precedents and erred by ordering such relief,” the Supreme Court wrote.

“This Court has repeatedly emphasized that lower federal courts should ordinarily not alter the election rules on the eve of an election,” the order reads.

Given the original sin of unnecessarily holding the election in the midst of a pandemic, the Supreme Court almost certainly got the law right. Wisconsin law, consistent with the laws of most if not all other states, requires absentee ballots be postmarked by election day. It’s not within the province of judges to arbitrarily re-write election law.

Still, while the Republican petitioners had the law on their side, the Democrats had the facts:

“A last-minute change to a voter deadline carries an increased risk that voters will not appreciate when votes actually must be cast,” Patrick Strawbridge, the attorney for the Republicans, warned in a filing with the top court. Strawbridge wrote the Supreme Court should “maintain the status quo of state election laws.”

In response, Democrats said that Republicans were ignoring the health risks posed by coronavirus, which has sickened more than 2,000 in the state, according to data from local health authorities.

“The ‘electoral status quo’ already has been upended ― not by any judicial order, but by the COVID-19 pandemic and the ‘voter confusion and electoral chaos’ it is causing,” wrote Marc Elias, an attorney for the Democrats, in a brief submitted to the court.

“Until very recently, Wisconsin voters reasonably expected they would be able either to vote safely in person on election day or through a reliable, well-functioning absentee ballot system,” Elias wrote. “Now they cannot ― and not because of any court order, but because of the pandemic.”

While most of the ire this morning is being directed at Republican justices on the Wisconsin and US Supreme Courts, it seems to me that they ruled correctly and reasonably. No, the outrage should be directed at Republican legislators in Wisconsin who are either downplaying the threat from the pandemic, engaging in gross voter suppression, or both.

Evers, a Democrat, did everything he could to mitigate this disaster, including a desperation executive order at the 11th hour he knew to be illegal. Millhiser again:

Republicans have fought tooth and nail against nearly any effort to delay the election or to make it easier for voters to cast mail-in ballots, and the state Supreme Court is dominated by Republicans. Last week, Evers called the state legislature into session and asked it to delay the election. But the Republican-controlled legislature ended that session a few seconds after it was convened.

Republicans also rejected Evers’s proposal to automatically mail ballots to every voter in the state, and they’ve fought hard in federal court — including in the US Supreme Court — to prevent ballots from being counted after the original April 7 election date.

It’s fully within the power of their office to take these policy positions and I believe both the Wisconsin and US Supreme Courts therefore ruled correctly. But the actions of Wisconsin’s elected Republicans here were shameful. 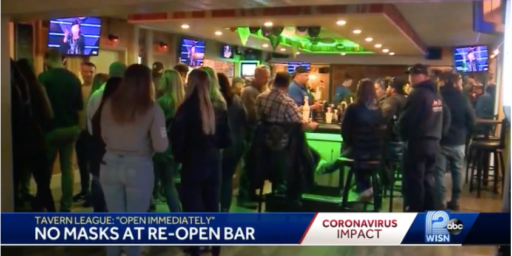