Realistically, President Trump has very few options when it comes to dealing with Iran and its nuclear program.

As I noted at the time they were imposed, it’s unlikely that this latest round of sanctions is going to be any more successful in achieving the Administration’s stated goals. As David Sanger notes in The New York Times, there are few options for the Administration:

President Trump’s last-minute decision to pull back from a retaliatory strike on Iran underscored the absence of appealing options available to him as Tehran races toward its next big challenge to the United States: building up and further enriching its stockpile of nuclear fuel.

Two weeks of flare-ups over the attacks on oil tankers and the downing of an American surveillance drone, administration officials said, have overshadowed a larger, more complex and fast-intensifying showdown over containing Iran’s nuclear program.

In meetings in the White House Situation Room in recent days, Secretary of State Mike Pompeo contended that the potential for Iran to move closer to being able to build a nuclear weapon was the primary threat from Tehran, one participant said, a position echoed by Mr. Trump on Twitter on Friday. Left unsaid was that Iran’s moves to bolster its nuclear fuel program stemmed in substantial part from the president’s decision last year to pull out of the 2015 international accord, while insisting that Tehran abide by the strict limits that agreement imposed on its nuclear activities. Mr. Trump has long asserted that the deal would eventually let Iran restart its nuclear program and did too little to curb its support for terrorism

Iran is not like North Korea. There is not one power center, no figure like Kim Jong-un to meet. The military and the clerics have a role. The 2015 agreement was negotiated between Secretary of State John Kerry and Iran’s foreign minister, Mohammad Javad Zarif, over a period of years; President Obama never met President Hassan Rouhani.

Moreover, the Iranians have said that Mr. Trump must first re-enter the old deal before negotiating a new one. Mr. Trump has refused, and Mr. Pompeo has said that to come to an accord, the Iranians must comply with his demands for 12 huge changes in their behavior, like ceasing support of terrorism and giving up all things nuclear.

“I can imagine talks,” Mr. Gordon said. “What’s harder to imagine is the deal would come anywhere close to what the Trump administration says is an absolute minimum.”

Trump, meanwhile has acknowledged that he does not have an exit strategy when it comes to dealing with the Iranians and the options for avoiding something that could spin wildly out of control are limited:

Any prospect of easing tensions between the United States and Iran seemed increasingly remote Tuesday, as threats and personal insults flew between the two governments.

Trump called Rouhani’s comments “ignorant” and said that Iran does “not understand reality.” Any attack on “anything American,” tweeted the president — who last week called off a military strike that was to have been launched after Iran shot down a U.S. drone — will bring “overwhelming” U.S. force and “obliteration” of some Iranian assets.

Beneath the din, no new options emerged for avoiding a conflict that both sides say they do not want, and more doors appeared to be closing rather than opening.

Trump has said repeatedly that he wants to talk. But he has indicated he is prepared to continue squeezing the Iranian economy and leadership until Iran meets the “very simple demands” he has tweeted — “No Nuclear Weapons and No Further Sponsoring of Terror!”

Iran, whose nuclear energy program is under international restrictions, says that it sees no reason to talk with an adversary that is crushing the life out of it, and that the United States must first show some respect. It said that “useless sanctioning” of Khamenei and Foreign Minister Mohammad Javad Zarif“means the permanent closure of the doors of diplomacy.”

In Washington, even those who fully and vocally support the administration’s “maximum pressure” sanctions policy have begun to question whether Trump has a strategy.

Mark Dubowitz, chief executive of the Foundation for Defense of Democracies, pushed back at critics who said economic sanctions against Khamenei were merely “symbolic” because the ayatollah has no U.S. assets. As the head of an authoritarian state, Khamenei presides over a $200 billion corporate conglomerate that controls massive international investments, Dubowitz said in a Twitter post.

But it was “perfectly legitimate,” Dubowitz tweeted, “to ask what impact [the Khamenei sanctions] will have on U.S.-Iran diplomacy.”

Michael Rubin, a Middle East expert at the American Enterprise Institute, where he worked with Trump national security adviser John Bolton, said, “I’m one who believes that pressure can work” against Iran. But neither the Iranians nor many of Trump’s own supporters understand where Trump is heading, he said.

“We’re at a very dangerous point right now where we risk allowing the Iranian leaders to rally people around the flag. In other words, sometimes it’s better to address a problem with a scalpel rather than an ax,” he said.

If Trump has few options with regard to Iran is primarily because of the position he has put himself in over the past two years. His decision to withdraw from the Joint Comprehensive Plan of Action (JCPOA), for example, has significantly reduced the ability that the United States would otherwise have to potentially influence Iranian behavior with a carrot-and-stick approach. If we were still part of the agreement there would be the possibility of bringing the Iranians to the table on other issues such as their ballistic missile program and their support for rogue regimes and terror groups, all of which are at the heart of other sanctions that were unaffected by the JCPOA.

Instead of doing that, though, the President withdrew from a treaty that was clearly working in the sense that Iran was cooperating in not expanding its nuclear research program and allowing international inspectors from the International Atomic Energy Association (IAEA) access to their research facilities. After that, he began a policy of reimposing sanctions that had been lifted after the JCPOA was signed and trying to get other nations that were involved in the negotiations that led to that agreement go along. So far at least, that strategy has been an utter failure. None of the European nations involved in the process — Germany, France, and the United Kingdom — have agreed to follow the Trump Administration’s lead and all three remain committed to the agreement and are trying to keep Tehran from walking away in the wake of the sanctions the U.S. has reimposed. Additionally, both Russia and China have made it clear that they have no intention of complying with American efforts to reimpose sanctions on Iran. As a result, the United States stands alone and isolated at a time when the best way to approach this issue would be with a united front where we and, at the very least, our allies attempt to coax Iran back to negotiations on the issues that the JCPOA didn’t cover.

All of this gets back to something I said two months ago, namely that the President’s Iran policy isn’t working because it isn’t intended to work:

[L]et me offer an alternative hypothesis. Namely, that the U.S. policy toward Iran isn’t working because it ultimately isn’t supposed to work. Many of the President’s top advisers, including National Security Adviser John Bolton and Secretary of State Mike Pompeo, have made no secret of the fact that they believe that the only solution to the problem of the Iranian nuclear program and the very existence of the Islamic Republic is military action. This is an argument that has also been made repeatedly by Israeli Prime Minister Benjamin Netanyahu and supporters of Israel in the United States who have long argued in favor of immediate military action against the Islamic Republic despite the fact that there is little evidence that such action would either have any impact on Iran’s military research programs or on the sustainability of the regime. This doesn’t necessarily mean that the Administration is consciously pursuing these policies with the idea of setting up an argument for war. but it does mean that because of the bias in favor of the eventual need for military action that exists in the Administration and the GOP generally the fact that the current policy is doomed to fail is a feature, not a bug.

Based on what has happened since then, it seems like this hypothesis may just be correct. 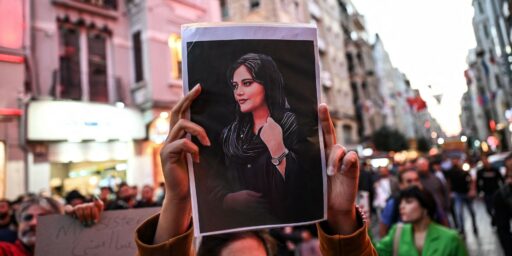