A story that has turned into a partisan kickball and some bad journalism have resulted in a celebrated news program getting considerable egg on its face. 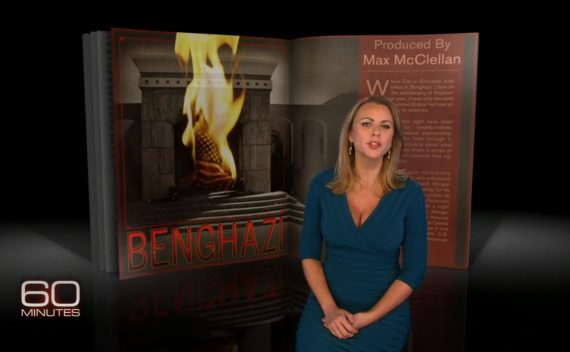 Two weeks ago, 60 Minutes aired a report on the September 11, 2012 attack on the U.S. diplomatic post in Benghazi, Libya that purported to blow the story wide open. Among the most important part of the report was an interview with a man named Dylan Davies, who claimed to have been present at the compound the night the attack took place and making claims about the level of security and the nature of the attack itself that called much of the U.S. Government’s account into question. Not surprisingly, conservatives jumped right on top of the report as confirmation of many of the allegations they had been making for the past 14 months about the attack itself and the action, or lack thereof, that the Obama Administration took that night and in the days thereafter.

As it turned out, though, there were serious flaws in the 60 Minutes report. Principally, it turns out that Mr. Davies, who was in many way, the “star” source in the report had given an entirely different story to the FBI in the days after the attack. Rather than saying that he was on scene during the attack, Davies told both his employer and the FBI that he was at his beach-side home elsewhere in Benghazi and that his efforts to get to the site of the attack proved to be entirely unsuccessful. Despite this, Davies wrote in a book that had been published last month before being pulled by the publisher that he had gotten to the compound and fought off insurgents in an effort to save Ambassador Stevens and the others who were under fire at the compound.  Despite the mounting evidence against him, Lara Logan and the producers of the 60 Minutes piece initially stood by both their report and by Davies. Last night, however, they were forced to offer an apologize:

Lara Logan was scheduled to deliver a report on Sunday’s “60 Minutes” about disabled veterans who climb mountains. Instead, she appeared in front of the newsmagazine’s trademark black backdrop and issued an apology.

Ms. Logan said that Dylan Davies, one of the main sources for a two-week-old piece about the attack on the American diplomatic mission in Benghazi, Libya, had misled the program’s staff when he gave an account of rushing to the compound the night the attack took place. “It was a mistake to include him in our report. For that, we are very sorry,” Ms. Logan said.

The apology lasted only 90 seconds and revealed nothing new about why CBS had trusted Mr. Davies, who appeared on the program under the pseudonym Morgan Jones. Off-camera, CBS executives were left to wonder how viewers would react to the exceptionally rare correction.

While veteran television journalists spent the weekend debating whether the now-discredited Benghazi report would cause long-term damage to the esteemed newsmagazine’s brand, some media critics joined the liberal advocacy group Media Matters for America in calling for CBS to initiate an independent investigation of missteps in the reporting process.

But the CBS News chairman, Jeff Fager, who is also the executive producer of “60 Minutes,” has not ordered an investigation, and on Sunday a spokesman indicated that the program was going to let its televised apology be its last word on the issue.

However, the apology was deemed inadequate by a wide range of commentators on Sunday night. Craig Silverman, of the correction blog Regret the Error, predicted that it would not “take the heat off CBS News.”

“Aside from the fact that it struck a very passive tone and pushed the responsibility onto the source, Dylan Davies, it said nothing about how the show failed to properly vet the story of an admitted liar,” Mr. Silverman said in an email. “There are basic questions left unanswered about how the program checked out what Davies told them, and where this process failed.”

“In the short term, this will confirm the worst suspicions of people who don’t trust CBS News,” said Paul Friedman, CBS’s executive vice president for news until 2011. “In the long term, a lot will depend on how tough and transparent CBS can be in finding out how this happened — especially when there were not the kind of tight deadline pressures that sometimes result in errors.”

Ms. Logan has said that a year of reporting informed the Oct. 27 piece, which was Mr. Davies’s first interview. Some of Ms. Logan’s conclusions still hold up to scrutiny — for example, that “contrary to the White House’s public statements, which were still being made a full week later, it’s now well established that the Americans were attacked by Al Qaeda in a well-planned assault.”

But enough doubts have been sown about Mr. Davies’ account of being an eyewitness that CBS apologized on Friday, scrubbed the report from its site (and the “60 Minutes” Twitter feed) and prepared Ms. Logan’s on-camera statement Sunday. (Mr. Davies’s account included him hitting an Al Qaeda fighter in the face with the butt of a rifle and seeing the dead ambassador, J. Christopher Stevens, at a hospital.)

Parallels have been drawn between this case and CBS’s flawed 2004 report on President George W. Bush’s time in the National Guard. Each time, the news division adopted a defensive crouch when advocates first started to question the stories. But the political backdrop has changed significantly this time. In 2004, there were accusations of “liberal bias” and unrelenting coverage of the controversy on conservative websites, driven by the right’s long animus toward Dan Rather, the correspondent on the Bush report, and the implication that he was trying to hurt the president’s re-election chances.

This time, conservatives initially trumpeted the “60 Minutes” report: the morning after it was broadcast, Senator Lindsey Graham, Republican of South Carolina, said on Fox News that he planned to block all administration nominations until Congress was granted access to all of the survivors of the attack

The brief apology that was aired last night, which had followed the decision late last week to completely pull the report from the shows website, has been widely criticized by media critics, mostly because it seems to raise just as many questions as it answers. Michael Calderone raises many of those question in a post over at The Hufffington Post, and one imagines that other critics will continue to put pressure on Logan and CBS over this as time goes on. Whether they’ll answer them, and whether this will end in some of the same kind of discipline we saw CBS impose in the wake of the Dan Rather/George W. Bush matter remains to be seen. That controversy, of course, ended with the firing of a CBS News Producer and the effective end of Dan Rather’s career. Will that happen to Logan and/or those responsible for the 60 Minutes report? And, more importantly, what role did the fact that Davies’ book was being published by a sister company of CBS News have in this entire project?

The other question, of course, is what all of this will mean for the ongoing political controversy regarding the Benghazi attack. Conservatives continue to push the idea that this is some kind of massive scandal that will bring down the Obama Administration. To a large degree, the report, and what Davies said specifically, seemed to reinforce parts of the narrative that Republicans on Capitol Hill have been pushing for the better part of a year now. As noted above, it was the 60 Minutes report that was the basis for Senator Lindsey Graham’s announcement that he would be placing a hold on all Senate nominations until the Administration makes every single eyewitness to the attack available to Congressional committees, something that he claims he still intends to do despite the fact that the report has now been thoroughly discredited. In the end, though, it seems as though this CBS News retraction is a major setback to the GOP’s efforts to turn Benghazi into anything other than a partisan talking point that they intend to carry all the way to the 2016 elections and the expected candidacy of Hillary Clinton for President.

The sad thing about all of this is that there are legitimate  issues raised by Benghazi related to embassy security, State Department security operations, and the consequencs of the U.S. decision to intervene in the Libyan Civil War. Unfortunately, thanks to the fact that the GOP seems intent on turning this into just another partisan war, none of those issues are likely to be discussed, which likely just guarantees the same mistakes will be made again in the future.