A Lesson In Polling

One result from the new NBC News poll shows us how important it is to pay attention to how poll questions are phrased. 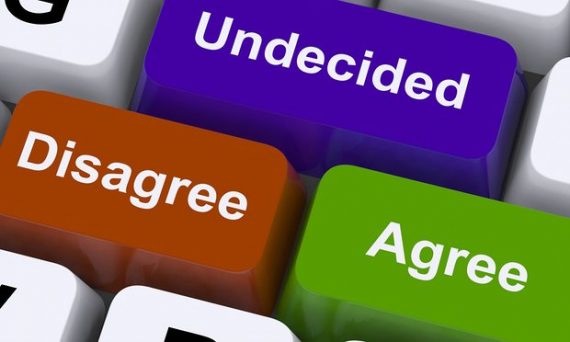 A new poll from NBC News is being reported with the headline “Poll: Majority of Republicans Prefer Someone Else to Trump,” but what it really provides is a lesson in how drafting a poll question can impact the outcome of that poll:

Just 45 percent of Republican voters say they are satisfied with Donald Trump as their party’s presumptive presidential nominee, while 52 percent say they would have preferred someone else, according to results from the latest national NBC News/Wall Street Journal poll.

By comparison, the numbers are reversed for Hillary Clinton among Democrats – 52 percent of Democratic voters are satisfied with Clinton, and 45 percent prefer someone else.

GOP attitudes about Trump break along ideological and educational lines. By a 53 percent-to-45 percent margin, conservative Republicans say they prefer a different nominee to Trump, while moderates are split 49 percent to 49 percent.

The NBC/WSJ poll – conducted June 19-23 – comes after Clinton became her party’s presumptive nominee; after the tragic terrorist attack in Orlando, Fla.; and after a rough three-week stretch for Trump’s campaign, which included a renewed effort by some Republicans to deny him the nomination next month.

Indeed, 55 percent of all registered voters in the poll said that what they had seen, read and heard about Trump over the last couple of weeks had given them a less favorable view of the real-estate mogul, while 20 percent had a more favorable view.

Despite those perceptions, the 2016 horserace remains competitive with Clinton ahead of Trump by five points – up just slightly from Clinton’s three-point lead in May.

Several media outlets are pointing to these numbers as yet another sign of Trump’s underlying weakness within his own party, where the “Never Trump” movement remains strong, Republican elected officials continue to distance themselves from Trump to the point where more and more top officials are declining to speak at July’s Republican National Convention, and the gap between Clinton and Trump in the polls continues to grow. This comes at the same time that Trump shows signs of real trouble in the money race against Clinton, and major Republican donors continue to sit on the sidelines, or concentrate on down ballot races, rather than associate themselves with Trump. These are all signs of trends that should be worrisome for any Trump supporter notwithstanding the fact that it is still early in the race and, if they continue it is likely that the Clinton campaign could become something of an unstoppable steamroller that will overtake Trump easily and hand Republicans a worse loss than what they saw in either 2008 or 2012.

At the same time, though, I’m going to suggest that this poll in particular doesn’t tell us very much about the current state of the GOP.  The specific poll question is phrased this way, “Are you satisfied that Donald Trump is the Republican nominee, or would you have preferred that the Republican Party nominated someone else?” As Allahpundit points out, NBC didn’t ask respondents if they were rejecting Trump now, if they had decided to vote for Hillary Clinton or Gary Johnson because they couldn’t support Trump, or if they are supporting the rumored last-ditch effort to dump Trump at the convention (which will fail, by the way). It asks what they would have preferred in the past, and the phrasing of the question is crucial. Moreover, a quick glance at some of the numbers associated with the 2016 Republican primaries will show why this poll isn’t surprising at all.

There were just over 31 million ballots cast in the caucuses and primaries that made up the race for the GOP nomination this year. Of that number, Donald Trump received 13.9 million votes, with the remainder of the ballots being cast for other candidates. That 13.9 million translates into 44,88% of the total ballots cast, or 45% for rounding purposes. The remainder of the votes numbered 17,132,832 and constitute 55.12% of the votes cast. (Source) These numbers roughly correspond to the split we see in the poll and arguably therefore are an artifact of the outcome of the race for the nomination, precisely because they ask respondents who they would have preferred as the nominee. Obviously, someone who was a long time Ted Cruz supporter, to pick just one example, would say that they would have preferred someone else as the nominee, but that doesn’t tell us much of anything about the situation today. To get an answer to that question, NBC should have asked respondents if they are comfortable now with Trump as the nominee. Generally speaking, that number can be found in poll cross-tabs that show demographic breakdown for polling questions, and in that respect most of the recent head-to-head polling has shown Trump with somewhere between 85% to 88% of Republicans behind him. That’s a far more accurate reading of where Republican voter are than a poll that asking them what they would have preferred.

Incidentally, the numbers work largely the same way for the Democrats. This poll has 52% of Democratic respondents saying they supported Clinton, with 45% saying they “would have preferred” someone else. Not surprisingly, this percentage is roughly the same as the breakdown of the popular vote for Clinton (16,783,506 votes or 55.4% of the total votes cast) and Vermont Senator Bernie Sanders (13,023,193 votes or 43.0% of the votes cast). Once again, because it asked a question based in the past, the poll almost perfectly matches the outcome of the primary race. (Source)

What this reminds us of, of course, is the importance of paying attention to what the poll is asking respondents as opposed to how the media is hyping the results. In this case, there is much less to this poll than meets the eye precisely because of how the poll is phrased.