Anti-government protests raged in Egypt for a second day, and nobody seems to know where they're headed. 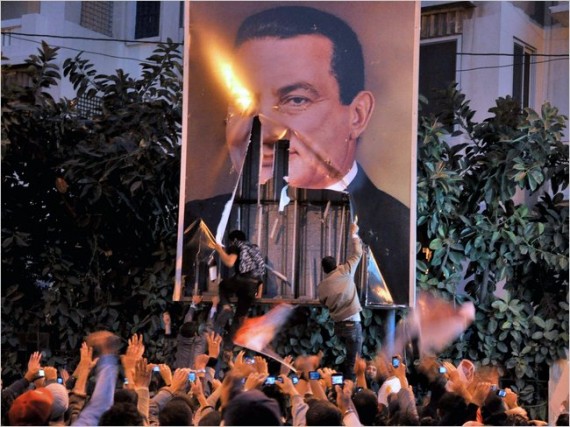 Inspired at least in part by the protests that led to the downfall of Tunisia’s government, people have taken to the streets in Egypt to protest the three decade long rule of Hosni Mubarak:

Fresh protests over living conditions and an autocratic government have broken out in Cairo a day after large and deadly demonstrations, calling for the ouster of president Hosni Mubarak, swept across the country.

More than 500 protesters were arrested by security forces as the government vowed to crackdown on them.

On Wednesday evening, thousands of demonstrators were spread throughout downtown Cairo after being dispersed by security forces. Many had gathered on Gelaa Street, near central Tahrir Square – the site of a violent early morning confrontation between security forces and protesters who had been planning to sleep the night in defiance of the government.

Police fired tear gas and broke up concrete to use as rocks to throw at protesters and “egg them on,” Al Jazeera’s Adam Makary reported.

Protesters lit a fire – possibly on a tyre – in the middle of a nearby street and were pelting police officers with stones, said Al Jazeera correspondent Rawya Rageh.

Meanwhile, prime minister Ahmed Nazif made what may have been the government’s first concession to protesters. In a statement to a state news agency, he pledged that the country’s leadership was committed to allowing freedom of expression “by legitimate means.”

But his statement came as the interior ministry said that 500 protesters had been arrested on Tuesday and Wednesday in an effort to clamp down on the public unrest. The ministry had said earlier on Wednesday that new demonstrations would not be allowed.

Thousands of armoured police had been deployed at key locations around the capital in anticipation of renewed demonstrations on Wednesday, which some have called the most significant in Egypt since massive riots over the price of bread in the 1970s.

Three protesters died in the port city of Suez, east of Cairo, during Tuesday’s unrest, and a policeman was also killed when he was hit in the head with a rock in Cairo, an interior ministry official said.

The government has responded to the second day of protests by threatening to arrest anyone taking to the streets:

Egypt is to crack down on public protest and has vowed to arrest and prosecute anyone found taking to the streets against the government.

Public gatherings, protests and marches will no longer be tolerated, the interior ministry has said.

The warning came as a fourth person died after nationwide protests, which were broken up overnight.

Medics said the injured person died in Suez, in the east of Egypt, where two protesters were killed on Tuesday.

A police officer was also killed amid the violence in Cairo.

Following a “day of revolt” across Egypt on Tuesday, protesters attempted to stage new demonstrations in Cairo on Wednesday.

There were scuffles reported outside the journalists’ union building in central Cairo as hundreds of people gathered to protest.

Police beat some with batons when they tried to break through a cordon, and protesters on nearby buildings threw stones, the Reuters news agency reported.

These events, along with the protests in Tunisia and the threat that Hezbollah may control the Prime Minister-ship in Lebanon, are posing something of a puzzle for the Obama Administration:

In interviews in recent days, officials acknowledged that the United States had limited influence over many actors in the region, and that the upheaval in Egypt, in particular, could scramble its foreign-policy agenda.

So it is proceeding gingerly, balancing the democratic aspirations of young Arabs with cold-eyed strategic and commercial interests. That sometimes involves supporting autocratic and unpopular governments — which has turned many of those young people against the United States.

Some analysts argue that the United States should seize on Tunisia to advance democracy across the Middle East — reprising the “freedom agenda” of the Bush administration and providing Mr. Obama a rare opportunity to deliver on pledges to build bridges to the Muslim world.

Secretary of State Hillary Rodham Clinton came closest to doing that in Qatar two weeks ago, when she bluntly criticized Arab leaders for their autocratic ways, a mere 24 hours before Mr. Ben Ali was driven from office. But Mrs. Clinton’s speech does not augur a return to the Bush approach, officials said.

For one thing, clamoring for democracy did not work so well for President George W. Bush, administration officials said. More important, a wave of upheaval could uproot valuable allies. An uprising in Tunisia, a peripheral player in the region, is not the same as one in Egypt, a linchpin. The Egyptian government is a crucial ally to Washington, but the population is very suspicious of American motives, and the potential for Islamic extremism lurks. “These countries are going to go at a different pace,” said Daniel B. Shapiro, a senior Middle East adviser on the National Security Council. “One couldn’t, or shouldn’t try, to come up with a cookie-cutter ideal of how to approach it.”

Not to mention the fact that “democracy” in Egypt could give rise to a government that is far from ideal to say the very least. The Muslim Brotherhood and similar groups remain strong anti-government groups in that nation, and putting people who agree with them near the levers of power could be profoundly destabilizing to say the least. In fact, one wonders what the Israelis are thinking about all of this considering that there is now the potential of political instability on two of their borders.