The nomination of Betsy DeVos to be Secretary of Education appears to be somewhat imperiled, and would appear to require a tie-breaking vote from Vice-President Pence to make it through the Senate:

Betsy DeVos has no votes to spare heading into a looming confirmation vote next week.

Republican Sens. Susan Collins and Lisa Murkowski said Wednesday they will vote against the Education Department nominee. That could very well mean a 50-50 standoff on the Senate floor — and Vice President Mike Pence being called in to put DeVos over the top. Republicans have a 52-48 majority, and no Democrats are expected to support the prospective education chief.

“Due to her commitment to improve our nation’s school system for all students and her focus on increasing parental engagement, I am supporting Betsy DeVos as our nation’s next secretary of education,” Sen. Dean Heller (R-Nev.), who was seen as the final potential swing vote, said late Wednesday afternoon. “I believe Betsy DeVos is the right choice for this position.”

If Pence is enlisted to break a tie, it would be the first time a vice president ensured the confirmation of a Cabinet nominee.

The back-to-back announcements by Collins and Murkowski created several hours of drama on Wednesday, raising liberals’ hopes of sinking a Trump nominee.

“This is not a decision I make lightly. I have a great deal of respect for Mrs. DeVos,” Collins said on the floor on Wednesday. “I will not, cannot vote to confirm her.”

Several Republicans, including Rob Portman of Ohio and Pat Toomey of Pennsylvania, began breaking “yes” for DeVos after Murkowski and Collins came out against her. Heller is up for reelection in 2018 and is viewed by Democrats as the most vulnerable GOP incumbent.

Now, if Republicans are able to make sure they don’t have attendance problems, DeVos is likely to be confirmed on Monday.

In an interview, Collins said she will allow DeVos to advance to a final vote, before opposing her. Likewise, Murkowski said she will oppose DeVos on final passage, a shocking rebellion against President Donald Trump that rippled through the Capitol.

“I have heard from thousands, truly, thousands of Alaskans who have shared their concerns about Mrs. DeVos,” Murkowski said. “I do not intend to vote on final passage to support Mrs. DeVos.”

The objection to DeVos appears to center on her support for school choice and charter schools, both ideas that I don’t really have an objection to but which teacher’s unions are vehemently opposed to. Perhaps not coincidentally, both Collins and Murkowski are among the handful of national Republicans who have received contributions from those unions, so that may explain their position on the nomination. It’s also worth noting that the delay in DeVos’s nomination, which could be held tomorrow as I understand it but may be delayed until next week, will also delay a floor vote on the nomination of Senator Jeff Sessions to be Attorney General since Republicans will need his vote to keep the count on DeVos at 50- 50. Additionally, as noted Pence’s tie-breaking vote would be the first time such a vote is needed to confirm a Cabinet nomination, It also comes very early in Pence’s term, which contrasts with his predecessor Joe Biden, who went eight years without having to cast a single tie-breaking vote. 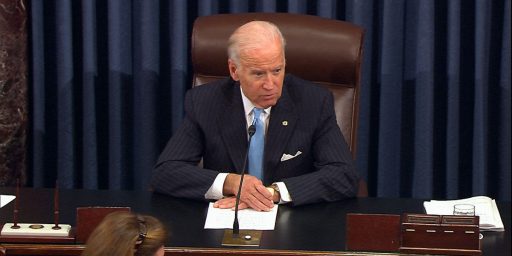