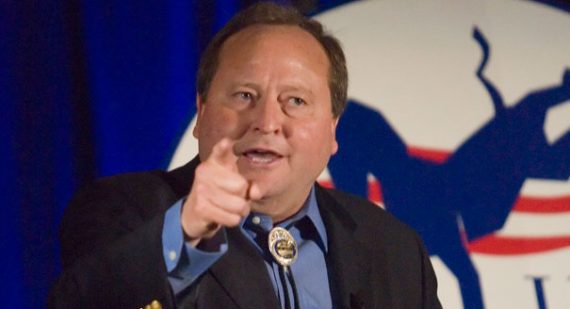 Former Montana Governor Brian Schweitzer, who some have mentioned as a potential Presidential candidate in 2016, is taking some interesting hits at Hillary Clinton from the left:

ANACONDA, Mont.—In a pine-paneled bar at the foot of the Rocky Mountains, Brian Schweitzer, the former Democratic governor of Montana, bites into a Tex-Mex salad and just about everything Hillary Clinton stands for.

He slams Mrs. Clinton for her ties to Wall Street, her courting of corporate campaign cash and her vote for the Iraq war as senator, a jab he delivered during a trip through Iowa in December.

Such outspoken criticism of Mrs. Clinton, rare among Democrats, inspires some leaders in the party’s left wing, who are disillusioned with President Barack Obama and soured by prospects of an unchallenged Clinton candidacy in 2016.

Montana has more cattle than people, making Mr. Schweitzer a long shot for the Democratic presidential nomination, should he even try. Complicating things further, the former two-term governor has little name recognition, little money and a big appetite for oil and gas exploration.

But some Democrats say Mr. Schweitzer has a chance at an important role: the maverick who speaks for disillusioned liberals, calls out Mrs. Clinton’s vulnerabilities and, perhaps, prods a more liberal champion into the race.

The perceived anointment of Mrs. Clinton has frustrated some Democrats seeking “a vigorous primary debate on bread-and-butter economic issues and who’s going to take on Wall Street,” said Ilya Sheyman, executive director of MoveOn, a liberal political-action group with eight million members. “Any candidate, including Hillary Clinton, is going to have to answer a whole lot of questions on where they stand.”

As Mrs. Clinton tacks right on foreign policy issues and delivers paid speeches to financial groups as the Democratic Party’s most likely presidential contender, she leaves open a lane, if not for Mr. Schweitzer then for another candidate who speaks the language of liberal populism.

“We would be eager to provide him a platform to make his pitch,” said Roger Hickey, who leads the Campaign for America’s Future, the liberal group that helped launch Mr. Obama’s presidential campaign. “There’s a large number of progressive activists and even middle-of-the-road Democrats who would like to see a real debate and a lot of enthusiasm.”

Neil Sroka, communications director for Democracy for America, a group that recruits and funds liberal candidates, says his members also question whether Mrs. Clinton is too close to Wall Street. Mr. Schweitzer, by contrast, “isn’t beholden to the interests that dominate Washington,” Mr. Sroka said. “He gets the fight in a really important way and that is incredibly appealing.”

Asked about all of the ex-governor’s criticisms, Hillary Clinton spokesman Nick Merrill said, “She’s proud to have spent a lifetime fighting for equality and opportunity for all people, from jobs and education to health care and voting, and will continue to do so.”

None of the other possible Democratic contenders have taken similar shots at the Clinton battlewagon.

There have been several rumblings of late from the progressive wing of the Democratic Party about the idea of someone stepping up to challenge Clinton in 2016 notwithstanding, and perhaps even because of, her perceived inevitability. The logic of the argument seems to be that Clinton, who will likely be running a Primary campaign aimed at building up support for the General Election, is unlikely to tack to the left when it comes to issues like income inequality and bank regulation, and even less likely to significantly criticize the foreign policy and surveillance policies of an Administration of which she was once a part. Typically, speculation about a potential candidate from this wing of the party has fallen on Massachusetts Senator Elizabeth Warren, but she has said several times now that she has no intention of running for President and that she wants Hillary to run. Vermont Senator Bernie Sanders, who has championed many of these issues during his time as a Congressman and Senator, has also been mentioned as a candidate but he’ll be 74 when 2016 rolls around and, quite honestly, is way too far to the left to be a credible messenger for the progressives. Schweitzer seems to fit the bill on all accounts, though. He was a popular two-term Governor of a state that has typically gone Republican in Presidential elections, for example, and his speeches at recent Democratic National Conventions have been very well received. He also hits many of the populist/progressive issues that this wing of the party seems to think that Clinton isn’t going to be spending much time on if she runs in 2016.

Realistically, it seems unlikely that Schweitzer, or indeed anyone, would pose a serious threat to Clinton. To a far greater degree than in the 2008 campaign, she has wrapped up the support of  many Democratic Party insiders, including people who were part of the Obama campaign against her in 2008. Even the lingering question of whether or not she will enter the race has, to a large degree, cleared the Democratic field of any real potential challengers. Most importantly, it seems as though she has learned from the mistakes that her campaign made the first time around and would be unlikely to make them again. That said, a credible campaign from the left by someone like Schweitzer could have an impact on the 2016 race in many ways. The most obvious, of course, would be to push Clinton to left on economic issues or at least force her to address issues that she otherwise might avoid in a “coronation” campaign. Republicans will see this as an opportunity to define the Democratic Party for the General Election, but it could also serve the purpose of energizing the voters that came to the polls for Barack Obama in 2008 and 2012 who might otherwise be inclined to stay home. Additionally, a strong showing by Schweitzer in the nomination race would inevitably lead to speculation about him becoming Clinton’s running mate. For someone like Clinton, picking a running mate from the progressive wing of the party would make as much sense as when Mitt Romney picked a Wisconsin Congressman beloved by the conservative wing of the GOP. Finally, there’s the possibility that lightening could strike again and Schweitzer could see himself become the next Barack Obama. It’s unlikely, of course, but then how likely was it that a very junior Senator from Illinois with a funny name would end up beating Clinton at this point eight years ago?