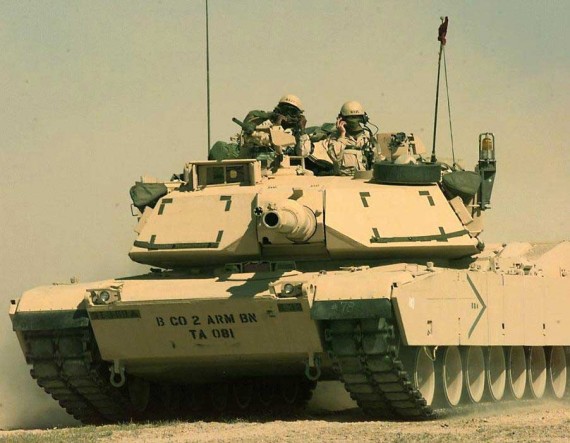 Members of Congress on both sides of the aisle are trying to force the Army to buy something it doesn’t want:

Built to dominate the enemy in combat, the Army’s hulking Abrams tank is proving equally hard to beat in a budget battle.

But senior Army officials have said repeatedly, “No thanks.”

It’s the inverse of the federal budget world these days, in which automatic spending cuts are leaving sought-after pet programs struggling or unpaid altogether. Republicans and Democrats for years have fought so bitterly that lawmaking in Washington ground to a near-halt.

Yet in the case of the Abrams tank, there’s a bipartisan push to spend an extra $436 million on a weapon the experts explicitly say is not needed.

“If we had our choice, we would use that money in a different way,” Gen. Ray Odierno, the Army’s chief of staff, told The Associated Press this past week.

This is not an unfamiliar story, of course. For decades, the military found it impossible to close down or consolidate stateside bases because Members of Congress would block such moves when it impacted bases in their state or district. For years, Congress has forced the Defense Department to maintain two engine designs for the F-35 Joint Strike Fighter even though the Pentagon repeatedly said that they didn’t want two completely different engine programs for the plane. In those cases as in this one, the explanation for why the military is being forced to take on a program it has stated it doesn’t need are purely political:

Keeping the Abrams production line rolling protects businesses and good paying jobs in congressional districts where the tank’s many suppliers are located.

If there’s a home of the Abrams, it’s politically important Ohio. The nation’s only tank plant is in Lima. So it’s no coincidence that the champions for more tanks are Rep. Jim Jordan and Sen. Rob Portman, two of Capitol’s Hill most prominent deficit hawks, as well as Democratic Sen. Sherrod Brown. They said their support is rooted in protecting national security, not in pork-barrel politics.

“The one area where we are supposed to spend taxpayer money is in defense of the country,” said Jordan, whose district in the northwest part of the state includes the tank plant.

The Lima plant is a study in how federal dollars affect local communities, which in turn hold tight to the federal dollars. The facility is owned by the federal government but operated by the land systems division of General Dynamics, a major defense contractor that spent close to $11 million last year on lobbying, according to the nonpartisan Center for Responsive Politics.

The plant is Lima’s fifth-largest employer with close to 700 employees, down from about 1,100 just a few years ago, according to Mayor David Berger. But the facility is still crucial to the local economy. “All of those jobs and their spending activity in the community and the company’s spending probably have about a $100 million impact annually,” Berger said.

Jordan, a House conservative leader who has pushed for deep reductions in federal spending, supported the automatic cuts known as the sequester that require $42 billion to be shaved from the Pentagon’s budget by the end of September. The military also has to absorb a $487 billion reduction in defense spending over the next 10 years, as required by the Budget Control Act passed in 2011.

Still, said Jordan, it would be a big mistake to stop producing tanks.

The problem, Congressman Jordan, is that you’ve got the Army itself saying that it doesn’t need that tanks right now, and that the money would be better spent elsewhere. Specifically, as the article notes, the Defense Department’s current plan is to suspend new tank production until 2017 when the newest revision of the Abrams will be ready to go into production. Between now and then, the money that would be normally allocated to tank production would instead by devoted toward research and development of the new tanks that would be going into production four years from now. Instead, largely for purely political reasons,  members of Congress want to force the Army to keep purchasing tanks it says it not only doesn’t need but which are going to be behind the times when the new Abrams goes into production. What is the sense of that, and where’s the evidence that what Congressman Jordan wants is “in the best interests of the national defense of the United States of America?” The only thing this seems to be in the best interests of are the re-election prospects of Congressman Jordan and Senators Portman and Brown.

Somewhat ironically, this story comes out just a bit over two weeks before we learned that the last U.S. battle tanks had left Europe, ending a presence that stretched back to World War II. At the same time, the war in Iraq has ended and the war in Afghanistan, where tank warfare has never really played a major role due largely to the terrain that we find ourselves in, is winding down. All of this together would seem to make the Army’s case even stronger. As the moment, and for the foreseeable future, there simply isn’t a need to expand the tank fleet in the manner that Congress would like to do. Instead of having Congress dictate military planning, this seems to me like one of the situations where Congress should be listening to the military planners and put the politics to the side.