John Cornyn tells Jennifer Rubin that he'll oppose the confirmation of his former colleague, Chuck Hagel, for Secretary of Defense. 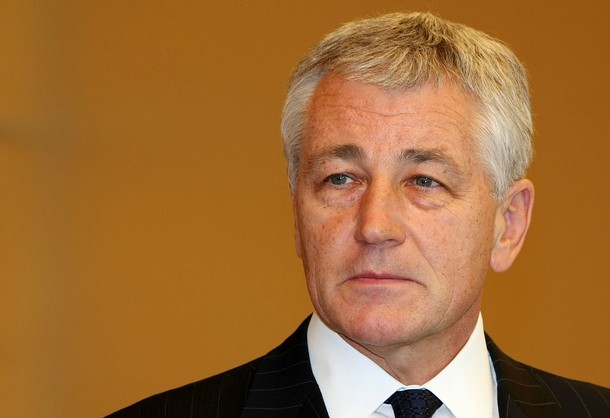 John Cornyn tells Jennifer Rubin that he’ll oppose the confirmation of his former colleague, Chuck Hagel, for Secretary of Defense.

He methodically ticked through a list of concerns he had, pointing to positions Hagel has consistently taken over the years. “There are some points about his record that make him unacceptable.”

He explained, “America is the indispensable power for peace in the world.” He then explained why Hagel would undermine that premise.

“He appears to believe [a nuclear-armed] Iran can be contained. [ Defense Secretary  Leon] Panetta and the president have said a nuclear weapon is a red line. He’s not even consistent with the secretary of defense and the administration.”

He pointed to another statement Hagel made in 2010. “He said he wouldn’t support all options being on the table.” This is also inconsistent with the president’s position. Cornyn asked rhetorically, “How does it help to tell Iran that?”

That ”America is the indispensable power for peace in the world” happens to be a core premise of the Atlantic Council, of which Hagel is chairman of the board and at which I’m employed.

That a nuclear-armed Iran can be contained is, of course, unknowable since Iran is not currently armed with nukes. But a list of countries armed with nuclear weapons that have not used them is identical to the list of countries who have ever possessed nuclear weapons with a single exception: the United States. And, technically, the bombs we dropped on Hiroshima and Nagasaki were atomic and no other country possessed comparable technology. Among those who have had nuclear weapons at their disposal and been contained: Josef Stalin, Mao Zedong, and Kim Jong Il.

Now, I happen to think the abolition of nuclear weapons is a pipe dream. Not only can technology not be uninvented but the fact of the matter is that being a nuclear possessor has tremendous prestige and security value, especially for small, vulnerable states like Iran. Nor, practically, will Global Zero amount to anything during the next four years, if ever, since the conditions under which the United States would reduce its inventories won’t be met.

Regardless, it’s hardly a crackpot movement. Among its signatories are dozens of former and current heads of state and heads of government. Oh, and former secretary of defense Frank Carlucci and former assistant secretary of defense Larry Korb, both of whom served under Ronald Reagan. And Robert “Bud” McFarlane, a national security advisor to Reagan. But that shouldn’t really be surprising; after all, Reagan supported abolishing nuclear weapons long before Global Zero was born.

Cornyn also cited Hagel’s vote against designating the Iranian Revolutionary Guard Corps as a terrorist organization in 2007. And he said, “He favors direct negotiations with Hamas. That is beyond the pale.”

Alas, Hamas, in addition to being a terrorist organization, also happens to be the leading political party in the Palestinian territory and the therefore governs the Palestinian Authority. If there are going to be negotiations, it’s going to be rather difficult not to include Hamas.

Cornyn also objected to Hagel’s remark in 2009 that “I’m not sure we know what the hell we are doing in Afghanistan.” (Although Cornyn did not cite it specifically, Hagel also remarked in 2011 that the U.S. ”lost our purpose, our objective” in Afghanistan.) Cornyn criticized the failure in Iraq to obtain a status of forces agreement that puts our gains at risk, arguing that Hagel would do the same in Afghanistan. He argued that ”it appears to me his position in Afghanistan after all we’ve invested, all the blood we’ve spilled” would leave the country in disarray and right back where it was before the Sept. 11 attacks.

I’ve spilled a lot of pixels on Afghanistan over the years and, if anything, Hagel is being diplomatic in his assessment of the operation. Whether our lofty goals were achievable in 2001 is, I suppose, debatable; that our wheels were spinning by 2009 is not. That fact that Cornyn thinks that leaving after a mere dozen years would mean undoing all the good that’s been achieved would seem rather powerful evidence that Hagel is right.

In addition, Cornyn took strong issue with Hagel on defense sequestration. “He basically believes the Defense Department can sustain the sort of Draconian cuts contained in sequestration — something Leon Panetta has said would be debilitating.”

That the Pentagon leadership is warning of dire consequences if their budget is cut is neither surprising nor interesting; that’s what bureaucracies do. Sequestration, combined with already programmed cuts, would amount to a trillion dollar cut in US defense spending over the next ten years. That’s a lot of money! But the projected $55 billion in cuts for FY 2013 still amounts to only 7.5 percent of the requested $728 billion Defense budget. And it’s only two-thirds the amount we’re projected to spend in FY 2013 on the fight in Afghanistan. Presumably, that amount will go down substantially come the end of 2014, meaning that the Pentagon budget will essentially be unchanged from current levels. Levels which, incidentally, are more than the entire rest of the planet combined spend on defense.

It’s debatable whether the time is ripe for austerity. But if we’re going to have massive budget cuts—and Cornyn is a leading proponent of that–the Defense department is going to take a heavy hit. That’s where the money is, after all.