Could Republicans Win the Senate?

Polls show the Republicans easily retaking the House but falling short in the Senate. But 2006 showed us that wave elections can produce shocking outcomes. 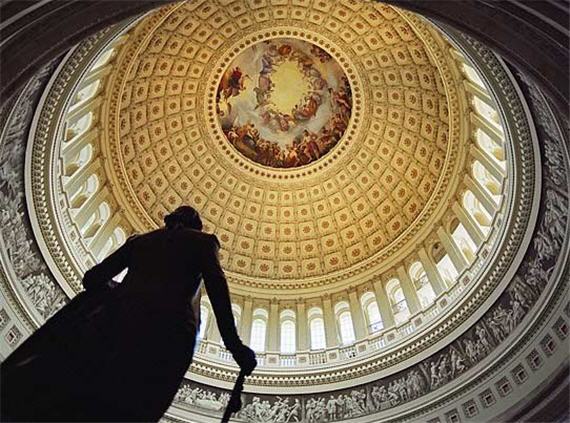 WaPo’s Chris Cillizza thinks Republicans may shock us and win control of the Senate, too.

Since 1930, party control of the House has flipped seven times. And each time, Senate control has also switched.

The reason is simple: Wave elections are, well, wave-y. If the voting public wants to send a message to the majority party, it tends to send it across the board, not just in a single chamber.

In 2006, for example, most pundits expected Democrats to win back the House. (They did.) But, few thought the party would gain the six seats it needed to reclaim the Senate majority; narrow victories by candidates such as James Webb (Va.) and Jon Tester (Mont.), however, put Democrats back in charge for the first time since they won back the chamber in 1994.

While acknowledging that the polling doesn’t support the idea (RealClearPolitics has the Dems with 49, the GOP with 46, and 5 toss-ups), Cillizza explains how a wave might occur:

All of the above assumes that Republicans lose none of their own seats, a possibility that is becoming more likely by the day. GOP Sens. David Vitter (La.) and Richard Burr (N.C.) appear to be on relatively solid electoral footing, and the open-seat Missouri contest has moved in GOP Rep. Roy Blunt’s favor. That leaves the Kentucky race between state Attorney General Jack Conway (D) and ophthalmologist Rand Paul (R) as Democrats’ best and only real pickup opportunity.

So, to summarize, to win back control of the Senate the GOP needs to win every seat it’s expected to, every seat for which it’s an even contender, and get one big upset.  That seems . . . unlikely.

But Cillizza is right about wave elections:  The Democrats did precisely that in 2006.   And I didn’t see that one coming, either.

Is 2010 a repeat of 2006?   In some ways, the situation for the Republican challengers now is actually better than it was for the Democrats then.  The economy is much, much worse.  And Democrats are holding a lot of seats in states that lean Red.   But Barack Obama is much more popular now than George W. Bush was then.   And we’re not likely to see another Macaca incident or an indictment of a long-serving Senator on election eve.

Cillizza leaves himself an out:

The possibility of a wild card – say, Alaska, where a three-way race could create chaos – always exists and could change everything.

There seems to be no realistic chance of the Democrat winning that race.  But the wheels seem to be coming off the campaign of Republican nominee Joe Miller. The beneficiary would seem to be incumbent Republican Senator Lisa Murkowski, who was defeated in the primary and is now running as a write-in candidate.    One presumes she would caucus with the GOP if they’ve got enough votes to retake the majority.  On the other hand, if they’re one vote short, she may well strike a deal with the Democrats.