The rules that Republicans will be playing under in 2012 are far less revolutionary than some pundits would have you believe. 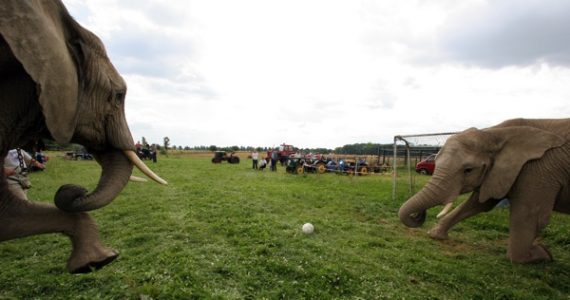 At the heart of many of the pundit fantasies about new candidates entering the race is the belief, spread by these self-same pundits and the media, that Republican delegate allocation rules in 2012 have changed in some fundamental way. According to this narrative, these changes make it less likely that we’ll see a repeat of the easy sweeps of past Republican nominees and more likely we’ll see something akin to the 2008 fight between President Obama and Hillary Clinton. The popular understanding is that every primary before April 1st must award on a proportional basis, which is the way delegates are awarded in most Democratic primaries. As I’ve noted before, this isn’t necessarily the case at all. In fact, after taking a look at the final delegate allocation rules announced by all the states, Josh Putnam finds that very little has actually changed:

The first, and perhaps the biggest, is that the states on the calendar through February have made no changes to their delegate allocation from 2008. They were already compliant with the 2008 method or were penalized for an early primary or caucus date and stuck with the 2008 rules knowing the RNC would not punish them further (…or daring the national party to do so). There is a chance, then, that if this nomination race resolves itself quickly, the rules changes will have no impact. Well, the new winner-take-all/proportional rules will not have had an impact. The new calendar restrictions — no states before the first Tuesday in March other than the exempt states — will play a bigger role in that scenario.

So, if Romney is able to run the table in January, or at least win three out of four of the contest, and then wins the few small contests in February ending with the Illinois primary on the 28th, then the new rules might have have an impact at all. But, what if the race stretches into March? Well, that depends on how many candidates stay in the race:

Looking at the March states and matching 2012 to 2008, the most frequent response to the rules changes was for states to tack on a conditional element to their allocation rules. Ohio, Oklahoma, Tennessee, Vermont and Virginia — all Super Tuesday states — added a conditional element to their allocation rules. Winner-take-all allocation is dependent upon a candidate receiving over 50% of the vote, statewide and/or on the congressional district level. This is an important point. That 50% threshold is really going to play a role if the field has been winnowed down to just two candidates. Actually, FHQ has made this point before: The fewer candidates there are, the more likely it is that someone breaks 50% of the vote, and subsequently takes all the delegates in any of these conditional states. Those January/February states become very important. In fact, that lull throughout much of February may be a killer for any candidate clinging to just a modicum of viability at that point. Voters will start limiting their choices to those who are most likely to win and if the likes of Bachmann and Santorum and whoever are not already out, that stretch will be very difficult to survive through.

In Virginia, of course, there are only going to be two candidates on the ballot and, although Newt Gingrich was leading in recent poling in the Old Dominion, it seems fairly likely that Romney will garner the vast majority of the votes cast there on March 6th and that he will get most if not all of the delegates at stake.

It’s possible, of course, that we’ll get to the end of February with more than three viable candidates in the race, in which case the rules in effect on Super Tuesday and throughout the rest of March could have an impact on the race, but that seems less and less likely as we get closer to the start of the actual voting. A long, drawn out race has been the exception rather than the rule for some time now, which is one of the reasons why the 2008 Democratic race was such a notable exceptions. Typically nomination fights get wrapped up pretty quickly, usually before they’ve gotten to a point where one candidate or another has won anything close to enough delegates to claim the nomination. The early primaries are a winnowing process. Candidates do worse than expected, money dries up, supporters start looking for an alternative among the candidate who are likely to win, and the logic behind the campaign comes to an end. This is what candidates like Rick Perry, Rick Santorum and Michele Bachmann are facing in Iowa. Most likely, only one of them is going to do well enough there to be able to make a credible case to voters in South Carolina and Florida. The other two will be left with the choice of either staying in the race or limping along toward a seemingly inevitable end. Indeed, just this afternoon, Rick Santorum said that a poor showing in Iowa would cause him to drop of out of the race. Neither Bachmann nor Perry are saying the same thing, but that’s true of them as well. By February 1st, the day after the Florida primary, we’re likely going to be left with at most four candidates — Romney, Gingrich, Ron Paul, and one of the other three. Of those, only Romney and Ron Paul seem to have the staying power to make it all the way through to April 1st. And in a race between Mitt Romney and Ron Paul, Romney would be the prohibitive favorite.

Unless something incredibly odd happens in the first two months of 2012, this is the most likely route that the Republican race is going to take and, in that case, Jonathan Bernstein’s words pretty much hit the nail on the head:

In most cases, the delegate allocation rules just don’t matter; the winning candidate in most cycles has wrapped it up early and would dominate the eventual delegate count regardless of how delegates were determined. That’s just as likely to happen this time as ever. If two very strong candidates emerge with the resources to fight it out to the end, then the delegate rules might, but probably won’t, affect who wins. And it’s still going to be about as hard as it ever was for a candidate (such as, potentially, Ron Paul) who takes a steady 15 percent or 20 percent in every state to build up enough delegates to seriously threaten to deadlock the convention; just as they did for Republicans in the past, delegate allocation rules will work against that sort of candidate. So, for the allocation rules: no difference in January. No difference in February. Small differences in March. No differences from April on. It’s just not a big deal, and it certainly isn’t a switch from universal winner-take-all to universal proportional representation.

Much like the “new candidate” theories and the fantasies of a brokered convention, it seems as though these not-so-new delegate rules are serving as yet another opportunity for pundits to theorize about what “might” happen in the coming months. The reality of what will likely happen, though, is far more mundane.